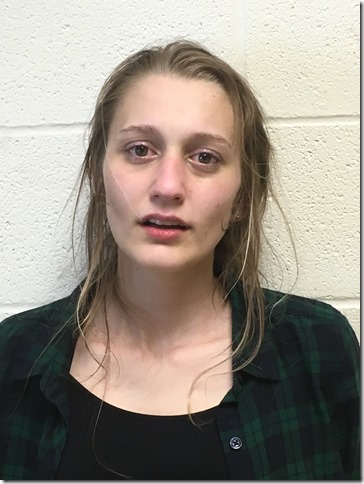 PRESS RELEASE — On 3/1/16 at approximately 1:45pm Officer K. Norton of the Pinehurst Police Department, was dispatched to a mini storage facility located in the 3500 block of West Park in Pinehurst in reference to suspicious circumstances. A white male and a white female were found to be asleep inside of a storage unit while a 2 year old child wandered around the grounds unattended. The white female, later identified as Meagan Danielle Lonion, 22 years of age, was awakened and found to be intoxicated on an unknown substance. She was arrested for Public Intoxication. Once transported to the Orange County Jail she was found to be in possession of a white crystal-like substance believed to be crystal meth. She was also charged with Possession of a Controlled Substance, Penalty Group 1, which is a State Jail Felony. If convicted, she faces 6 months to 2 years in a State Jail and a $10,000 fine.

Due to the extreme state of his intoxication, the white male was transported by ambulance to Baptist Hospital in Orange.

Child Protection Services was contacted and the child was released to a family member.

LSC-O Foundation Sets Date for “Boot Scootin’ at the…