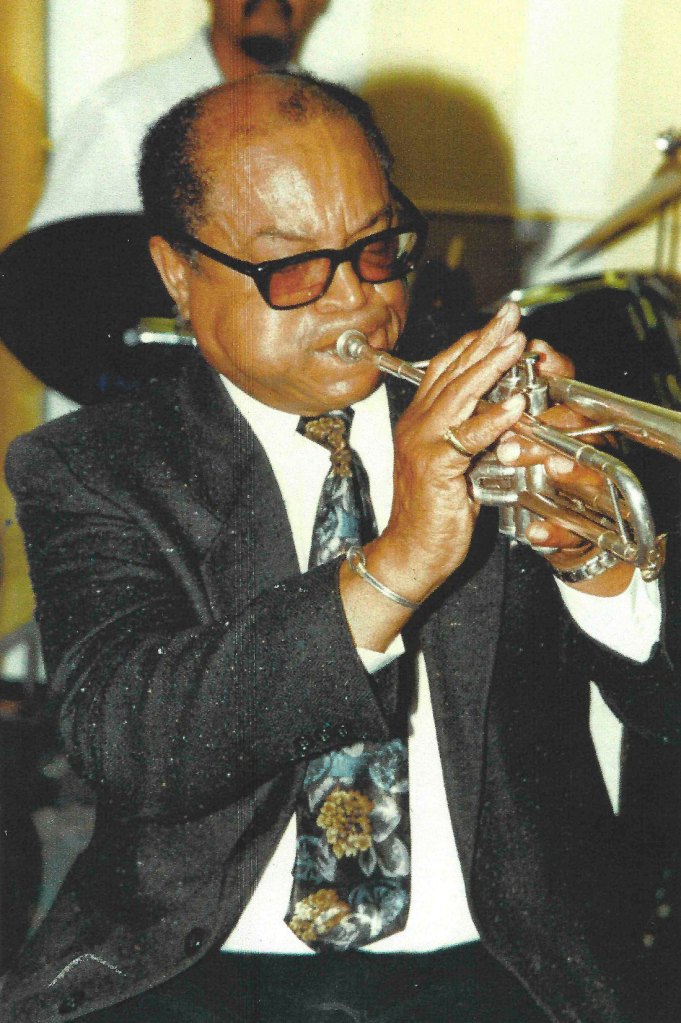 George McClain Alexander, Sr. was born February 20, 1928, in Orange, Texas. He was reared by his mother, Leona, and stepfather, Ben Griffith, who owned the Morning Glory Café for many years. The café not only served good food, but the patrons were entertained with soulful music while dining. At an early age, George discovered the magic of music, fell in love with the trumpet, and became a gifted musician. George began to make his musical mark at the early age of fifteen when he played professionally with the “Bubba Lutcher Band” touring Louisiana and Texas. After finishing Morton High School, George attended Prairie View College for a few years.

George’s passion for music continued after being drafted in the United States Army. With much delight, George was selected to play in the Army band during his service in the military. His stint in the Army band offered him the opportunity to meet many future jazz greats. After his service in the Army, George realized the necessity of a college education. He returned to Texas and attended Huston-Tillotson College where he received his bachelor’s degree in music. He also worked on a master’s degree at Texas Southern University.

With many tours in Texas under his belt, George decided to travel to New York and experience the jazz flavor there. His experience in New York was overwhelming. He met Miles Davis and reconnected with his Army buddy, Andy Simpson, of the band “The Three Sounds.” George received many opportunities to play his horn on the East Coast and met many people who later became famous from that area. George’s aggressive playing skills were developed from playing on the East Coast. He had a unique style that was unrestrained when projecting a simple musical style in order to create a sound that exemplified a feeling that was remembered not only by him, but his audience too. In addition to this particular technique, he integrated his Gulf Coast skills, which created a cross section of groovy performances.

Upon George’s return to Texas, he married Noralee Willard and they had three beautiful children. George had already been blessed with a son in Orange named, Franklin George Alexander, who was blessed with the musical talents of his father and also graduated with a music degree from Prairie View College.

George and Noralee left Texas and headed to the coastal plains of Los Angeles, California. He played his horn daily and had the opportunity to meet jazz legends such as John Coltrane, Dexter Gordon, Gladys Knight, Nancy Wilson, and Ella Fitzgerald. He was contracted to play a small role in the movie, “Pepe”, at Columbia Studios, which offered an opportunity to experience the Hollywood lifestyle. George’s greatest opportunity came when he played with the “Lighthouse Allstars” on Hermosa Beach, California, where his name was featured on the marquee. He caught the attention of Lionel Hampton and joined his band for a short period of time. Thereafter, “Hamp” frequently requested George to perform with him on special occasions.

During the early 60’s, George and Noralee decided to move to the San Francisco Bay Area. He was immediately recognized for his musical talents and skills and was offered a teaching position in the West Contra County School District in Richmond, California. George taught his passion to countless students for the next 30 years. George played all over the Bay Area for weddings, funerals, parties, conventions, and with The Oakland Raider Band. He also played regularly with the “Fat’s Gaines Band” in San Francisco for 20 years, featuring his son, George “Opie” Alexander, who performed as a dancer. George’s musical talents extended internationally. He traveled to Amsterdam, London, Belgium, France, Denmark, and Spain with the Celestial Brass Band.”

George’s musical abilities were profoundly displayed on a CD produced by Touche Records called “Happiness is… Takin’ Care of Natural Business, Dig?” with the Al Tanner Quintet. This gig was the one that promoted more recognition for George in the San Francisco Bay Area.

George’s love, passion, and musical gifts allowed him to record and produce his own CD titled, “Blowin Thru the City.” George reintroduced his soulful, organic trumpet sound. In addition to playing the trumpet and flute, George sang on the CD and wrote four of the songs. His son, Jay, and daughters, Sandra and Abba, inspired George, created all of the graphics and assisted George with the distribution. It was George’s desire that this smooth music would last a very long time. Once again, George proved his ability to blend soul and inspiration together.

George showed his passion for his instrument in every performance, which created a loving experience for any musician. His expertise with the trumpet added to his soulful delivery. He was usually mesmerized in his own musical world. George often said, “This is my life, this is my love.” George died on September 2, 2014, in California.