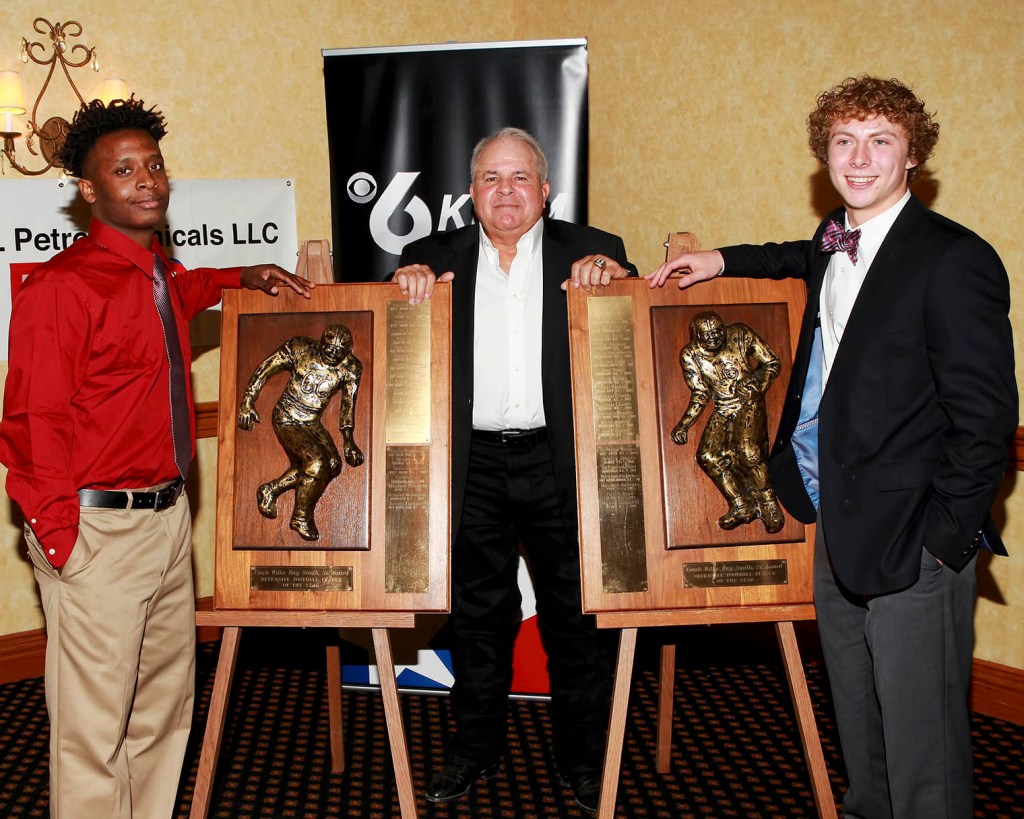 BEAUMONT — It was another banner night for the West Orange-Stark football program Wednesday night as Mustang senior linebacker Steven Tims and junior quarterback Jack Dallas walked away with the Willie Ray Smith Awards at the Elegante Hotel.

Tims won the Defensive Award while Dallas snared the Offensive Award. Which was fitting, as both players were named the MVPs on their sides of the ball when the Mustangs claimed the Class 4A Division II State Crown with a 22-3 win over Celina in December.

The duo became the first teammates to sweep the WRS Awards. Vidor quarterback/linebacker Montana Quirante did win both awards in 2012.

“I am very honored just to be here,” Tims said. “I couldn’t have done it without my teammates, coaches and all the fans who supported us through the season. It is a great thing to carry on the WO-S defensive tradition. Ever since I was a kid winning this award has been a dream. Today, it finally paid off.

Tims also thanked all of his teammates and coaches as well as his mother and his grandparents for helping pave the way.

“So many people helped me along the way and I’m so grateful,” said Tims. “I remember when Kevin Robinson won this award a few years ago and I said back then that one of my goals was to be here and win this award. It’s a tremendous honor.”

Dallas was against some tough competition as well.

The other Offensive Finalists were quarterbacks as well in Silsbee’s Dontre Thomas, Port Neches-Groves’ Adam Morse, and Hamshire-Fannett’s Kendrick King.

“It is special,” Dallas said. “There are NFL players who have won this award. To win it tonight, it is amazing. It really tops the year off.”

Dallas completed 199-of-305 passes for 3,113 yards and tossed 38 touchdowns with just seven interceptions. He also rushed for 207 yards and six TDs.

Dallas gave a superb speech, talking about the love and support that his family has given him throughout the years and how his Mom and Dad were his backbone. He gave plenty of recognition to all of his youth football coaches and did get a little emotional talking about his teammates.

“I would not be here without my teammates and coaches, that’s for sure,” said Dallas. “For us, it has been all about team. We go out and push each other every day to make the team better. We’re more than just a team, we’re just one big happy family. When you reach that point, you have a chance to be pretty good and we accomplished so much.”

Mustang coach Cornel Thompson was thrilled with what took place.

“The big deal was winning the state championship,” WO-S coach Cornel Thompson said. “It is a big deal to have their names on that trophy. They are two solid citizens and there is nobody more deserving. I am going to redshirt Steven. I wish we had Steven back. We have Jack back. “I never been in this situation over than winning the state championships in the 1980s but being the head coach, this is extremely special. I am at the top of my career at this time.”

Here are the past Willie Ray Smith Award winners: