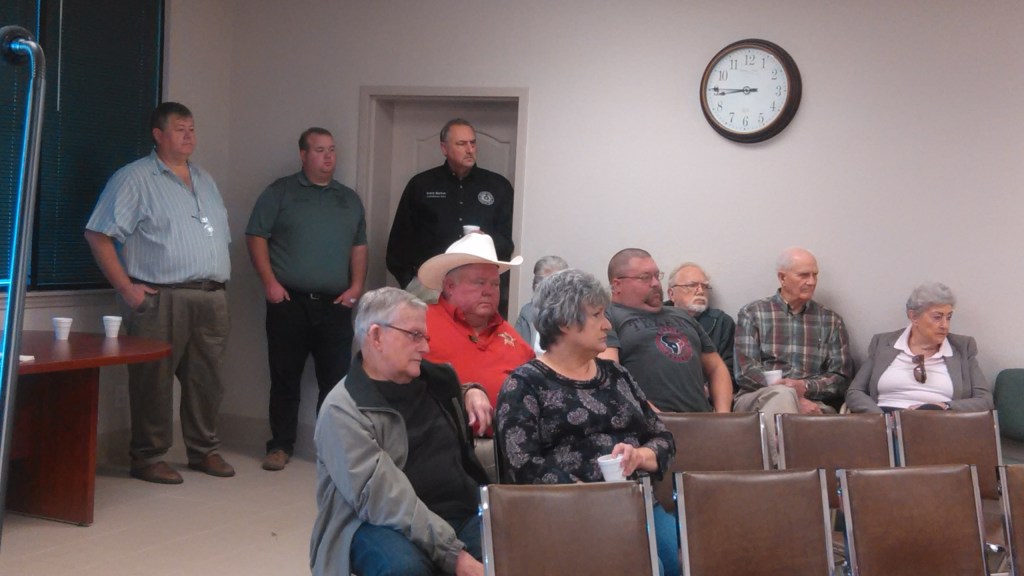 Dawn Burleigh/The Orange Leader Citizens, Commissoner, Constable and Department heads turned out for the inaugural Coffee with the Mayor in Pinehurst on Tuesday.

PINEHURST — Residents met heads of the departments during a Coffee with the Mayor event on Tuesday morning.

The informal meeting was held to help citizens know more about each department and to help with one’s experience with the city.

Code Enforcement Officer Harry Vine, often referred to as the “Grass Police”, discussed recent ordinances and why each one was created such as the sign ordinance.

“The ordinance is lengthy because we were trying to cover everything,” Vine said. “It is aimed at decluttering the city to make it more attractive.”

The ordinance also prevents any billboards to be erected within the city limits.

Vine also said the recent creation of a Planning Commission is a requirement for a Texas Agriculture Grant.

According to Vine, the recent building codes established in December not only create better sustainable structures within the city but also creates a better rating for the city.

“With the changes, the city went from a 10 to a five rating. The lower the number the better the rating,” Vine said. “This should also help lower insurance rates eventually.”

All for a goal to improve the quality of life in the city, which can also help, attract new businesses and residents.

“We are proactive, not reactive,” Hanauer said. “We have identified target areas.”

“But we also encourage you to look outside and let us know if you see something suspicious. We will look into it,” Hanauer said. “Citizens getting involved is what keeps making Pinehurst great.”

City Administrator Robbie Hood announced he is looking into organizing a National Night Out later in the year to also give residents an opportunity to meet the officers of Pinehurst.

National Night Out is an annual community-building campaign that promotes police-community partnerships and neighborhood camaraderie to make neighborhoods safer, better places to live according to the official website.

A resident asked if it was possible to make the signs slightly larger so it can be easier to read.

The new signs will be reflective.

“Our animal shelter has had a couple of animals which were there a couple of years,” Toney said. “We try not to put any animals down unless they are really ill. Traci James, a volunteer, has really helped a great deal with finding homes for the ones in the shelter.”

Hanauer asked about the cost of keeping an animal in the shelter.

“All the dog and cat food is donated by Walmart,” Toney said.

Robbie Hood said he was looking to do something to help generate funds or donations to expand the shelter.

The meeting, lasting about an hour and a half, will happen about once a month to allow citizens an opportunity to meet the city officials and have a chance to raise concerns or give suggestions to the city.