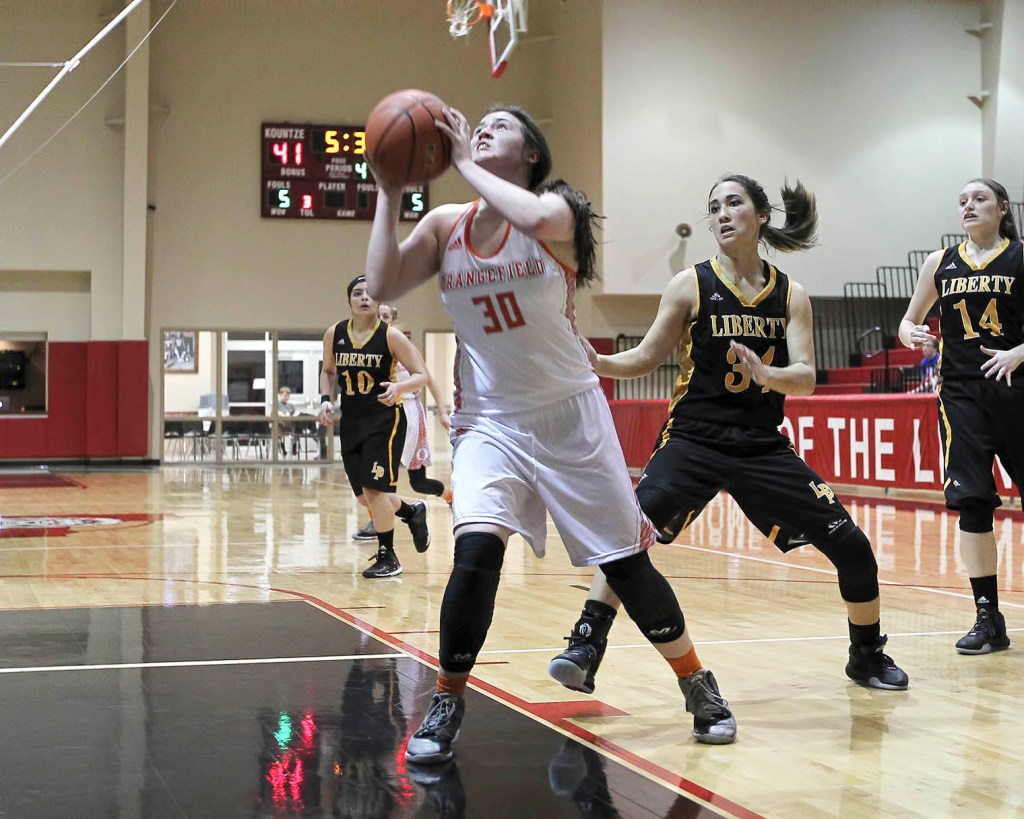 Leader Photo by Mark Pachuca Orangefield's Sabryn Crain goes up for a layup against Liberty.

KOUNTZE – Using big runs in the first quarter and the fourth quarter,
the Orangefield Lady Bobcats crushed the Liberty Lady Panthers 60-33
in Class 4A Region III bidistrict playoff action at Kountze High School Monday night.
The Lady Bobcats (21-12), runnerups out of District 24-4A, outscored the Lady Panthers (11-20), the third-place team out of 23-3A, 18-5 in the first period and 22-5 in the final eight minutes to cruise to the win.
Orangefield placed four players in double figures.
Post Sabryn Crain notched a  huge double-double, tallying 14 points and snagging 19 rebounds.
Forward Hanna Lowe poured in a game-high 17 points to go along with nine boards. Bethany Green chimed in with 11 points and eight rebounds. Emmi Lummus filtered in 11 points while Paris Fregia had five points and played excellent defense.
The next task for the Lady Bobcats will be the Navasota Lady Rattlers (34-0), the state’s No. 1-ranked team, Friday night in the area round.
Lummus scored seven of her points in the first quarter to ignite the Lady Bobcats while Lowe tallied six in the period.
Green scored eight of her points in the first half, including four big points late in the second quarter to help push the Orangefield lead to 30-14 at intermission.
The Lady Panthers scrapped back by outscoring Orangefield 14-8 in the third period and Liberty got as close as 36-28. Orangefield led 38-28 heading to the fourth.
The Lady Bobcats sealed the deal by opening the fourth quarter with a 18-0 spurt that sent the Lady Panthers reeling. The Lady Bobcats forced Liberty into nine fourth-quarter turnovers.
Lowe scored seven of her points in the quarter while Crain had five.
Point guard Fiona Franco led the Lady Panthers with nine points. Haley Simmons had eight points and collected six rebounds. Harley Davis had five points and six boards. Haylee Ford contributed nine rebounds while Trenecia Lafleur added five rebounds.
The Lady Bobcats had a superb night at the free-throw line, going 22-of-29 while the Lady Panthers were just 7-of-17.
Liberty finished with 29 turnovers while Orangefield had 25, including eight in the third quarter.
The Lady Bobcats finished with a 43-33 rebounding edge.