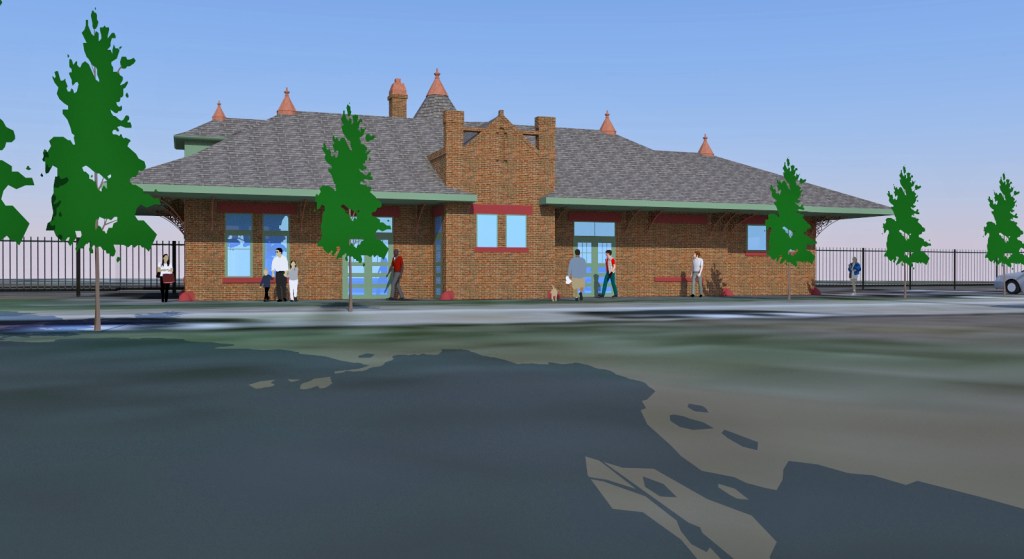 Courtesy graphic Artist rendition of the restoration of the Orange Train Depot upon completion.

Excitement filled the room as the announcement was made at the board meeting of the Friends of the Orange Depot last Thursday that enough funds had been raised to allow the restoration construction to begin in early spring of this year.

In attendance was project architect Rob Clark, who showed the group the construction documents that are nearly complete. The board has agreed to work with Ronnie Lang and Associates as the general contractor, with whom both the architect and local businesses have collaborated on numerous restoration projects. Clark said, “It is very important for us to work with someone who has had experience in restoration work and Ronnie does. In the depot for example, we won’t be tearing out and replacing the windows, we will be repairing them. Old wainscoting that had been removed at one time was saved by a thoughtful Orange resident and it will be put back on the interior walls.”

With the help of funds raised at the organization’s November gala, the construction on the landmark building can begin. President Carrie Woliver announced to the group that to reach their final fundraising goal of $650,000, there was still an outstanding balance of $183,000 needed to finish the entire project. Support from the community and from foundations across the area and the state of Texas is currently being sought. She said, “We all feel that when the community sees the activity at the Depot, many will realize that it is really happening, so they will want to show their support to help finish it. As they drive over the railroad track going to downtown Orange, they will be able to visualize what an attraction the restored Depot Museum will be in its special location at the apex of the Historic District.”

Orange area sub-contractors who may be interested in working on the Depot restoration should contact Ronnie Lange at 409-736-2565 or email at Langebrothers@att.net. Selections will be made based on pricing and quality experience. Clark estimated that 75 percent of the construction work done on the building will be performed by Orange county workers.

Donations can be made on-line at www.orangetxdepot.org, or by sending a check made out to Friends of the Orange Depot to P. O. Box 2654, Orange, TX 77631. Brick forms are also available on the website. Two sizes are available, 4×4 for $50 and 4×8 for $100. These bricks will be engraved with donors’ names and will be placed in the pathways around the building.

Engineering is the focus of first-generation LU student Thanh…