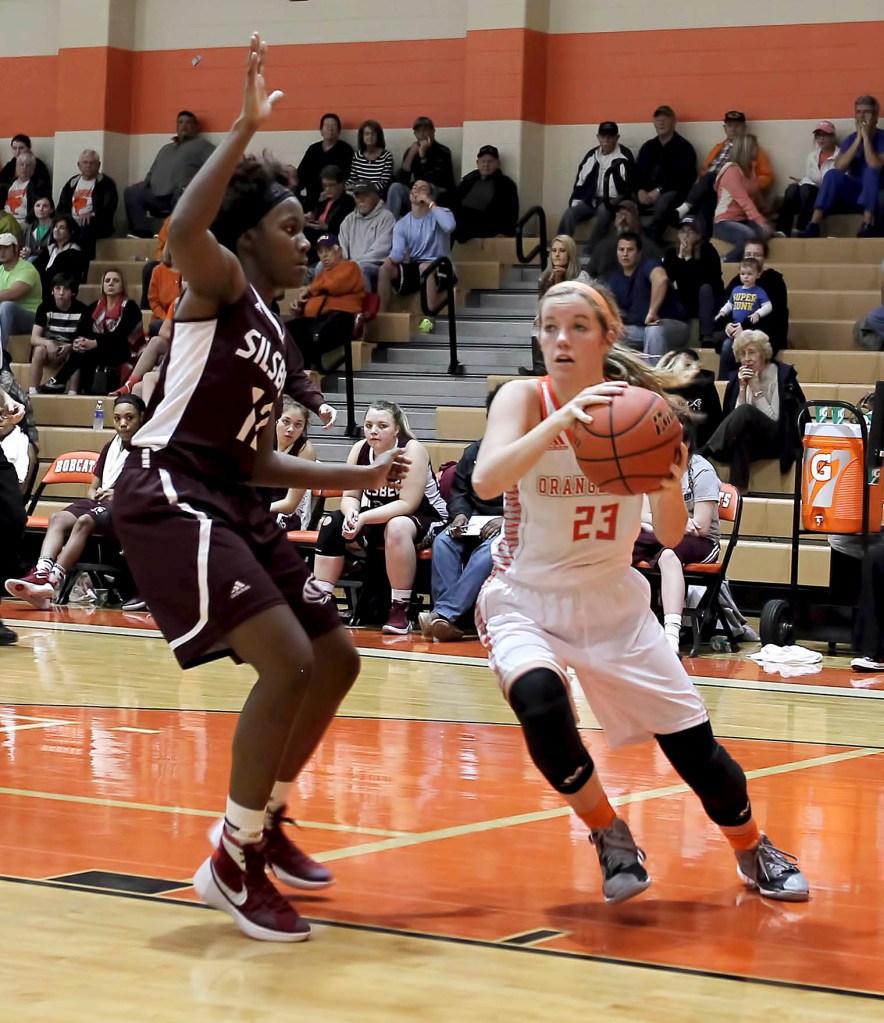 ORANGEFIELD – Making crisp passes and protecting the ball well Tuesday night, the Orangefield Lady Bobcats have pushed themselves into a first-place tie with Silsbee in District 24-4A play by downing the Lady Tigers 74-69 at Bobcat Gym.

Both teams now stand at 6-2 in 24-4A play with four games remaining.

It was much better for the Lady Bobcats this time around after they fell to the Lady Tigers 54-43 in the first half of district play.

“The key to trying to beat Silsbee is beating their press,” said Lady Bobcat coach Jenifer Willis. “We were able to do that for the most part tonight.”

Forward Hanna Lowe and post Sabryn Crain were definitely thorns in the side of the Lady Tigers all night.

“Our passing was superb tonight,” said Willis. “We were patient and got a lot of big layups against their press and we also made some nice passes inside that led to goo shots.”

The Lady Bobcat win offset a brilliant performance from Silsbee forward Symone Carmenar. Carmenar tore through the Lady Bobcat defense for a game-high 37 points and game-high 15 rebounds. She scored 25 of her points after intermission.

“Symone, she’s an awesome player,” said Willis. “She is going to get hers, that’s for sure. If you can control everyone else, that can really help and we did that tonight.”

Silsbee led 15-10 in the first quarter but the Lady Bobcats scored nine straight points to go up 19-15 at the end of the quarter as Lowe and Crain combined for seven points apiece.

The Lady Bobcats stretched their lead to 39-27 at the half as Lowe scored seven points and Crain six in the second quarter.

The Lady Tigers trimmed it to 40-34 in the third quarter but the Lady Bobcats finished the period with a 19-12 run to lead 49-36 going to the fourth quarter.

The Lady Tigers kept on battling and trimmed the margin to six several times in the last eight minutes but the Lady Bobcats were able to hold on, making key shots down the stretch.

Lowe tallied nine of her points in the fourth quarter while Carmenar had 12.

Orangefield finished with a 45-41 rebounding edge.

The Lady Bobcats finished with 25 turnovers while the Lady Tigers had 21.

The Lady Bobcats will look to continue their winning ways Friday when they head to Sour Lake to face Hardin-Jefferson.