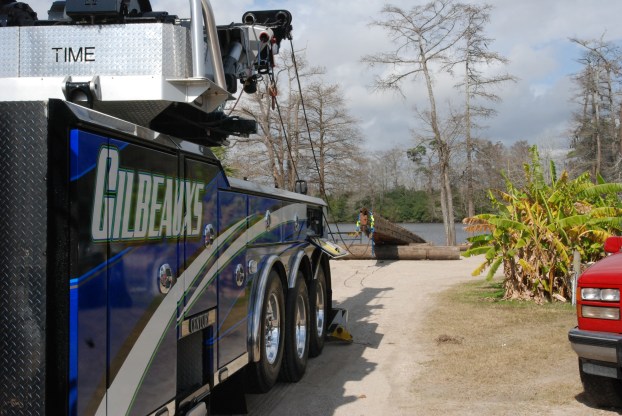 Concern for the safety of fellow boaters, Stan Floyd, owner of American Airboats in Orange, with the assistance of Gilbeaux’s Towing, removed a wooden object from local waterways.

“My main concern was what if a family was out on a boat and did not see it,” Floyd said. “I was concerned a child would be injured from a boat hitting it.”

The object, which appears to be 12×12 pieces of wood held together by now rusted metal, has floated along the Sabine River for a few years.

“I have seen it floating in different areas,” Floyd said. “Everywhere from the Orange City Boat Ramp to Bluebird’s. It will shift with the winds and the tides.”

Floyd, a Vietnam veteran, pointed to several markings along the piece showing propeller markings where boats have struck the mysterious object over time.

The article, partially submerged preventing one from clearly identifying the same, size, or weight of it, recently shifted to reach shore to shore in an area boaters refer to as the Hi Line.

“With the waters higher than normal, I knew this was an opportunity to move it before someone got hurt,” Floyd said.

Floyd, along with the help of two of his employees, hooked onto the mass to drag it through the water for two and a half miles to the lake behind American Airboats.

“I impressed myself,” Floyd said. “I was using a 16-foot New Texas Edition airboat. It is a relatively small airboat and it was able to drag what I estimate to be 10,000 pounds of soaked wood.”

To add to the adventure, as Floyd and his helpers were navigating the way back. They witnessed an individual backing up to launch a boat when the person submerged the truck and ‘jack-knifing’ the boat trailer.

Ryan Shaw, of Orange and one of the American Airboats employees assisting Floyd, helped remove the truck from the water before continuing the journey.

“I was mainly worried about getting cut with the trailer or slipping on algae,” Shaw said. “But I had to go under three times because I could not get a deep breath because the water was so cold.”

Once the truck was again on land, the group continued to drag the strange object to a new resting place at American Airboats.

“I would like to find out what the original purpose of it,” Floyd said.

Floyd is not unfamiliar with cleaning up the waterways surrounding the area. He helped spearhead a clean up campaign during the 1990s while he operated an airboat touring business in the area.

“I removed unsightly objects over the years,” Floyd said. “I wanted the tourists to enjoy the scenery of the Cypress Waters and Sabine River.”

A touring business Floyd hopes to reopen in the Spring.

“I recently returned to Orange and from being partially retired,” Floyd said.

The mysterious product floating in the water proved to be more difficult to remove once the object was at the shore of the business.

“We had two six-ton four-wheel forklifts and a four-wheel high performance Dodge truck and were only able to bring it so far out of the water,” Floyd said.

That is when Gilbeaux’s Towing stepped in with a 75-ton rotator truck.

“The unit is usually used for recovery work,” Chad Gilbeaux said. “It has a 360-degree rotating boom to lift objects.”

Gilbeaux estimated the weight of the waterlogged object at 100,000 pounds.

During the process of moving the object out of the water, eye latches were discovered on one side, a side originally thought to be the bottom.

Before it was completely out of the water, the 99 foot long object appeared to be triangle in shape, such as a slice of pizza. However, on one end, it angles on one side.

Rust has claimed several nuts and bolt heads, which help secure the metal to the boards scarred from water and propellers over the years.

Anyone who can recall what the object was used for originally, contact The Orange Leader at 409-883-3571

Jadyn Stack is an eighth grader at Little Cypress Junior High and one of the Argos starring in the JASON... read more