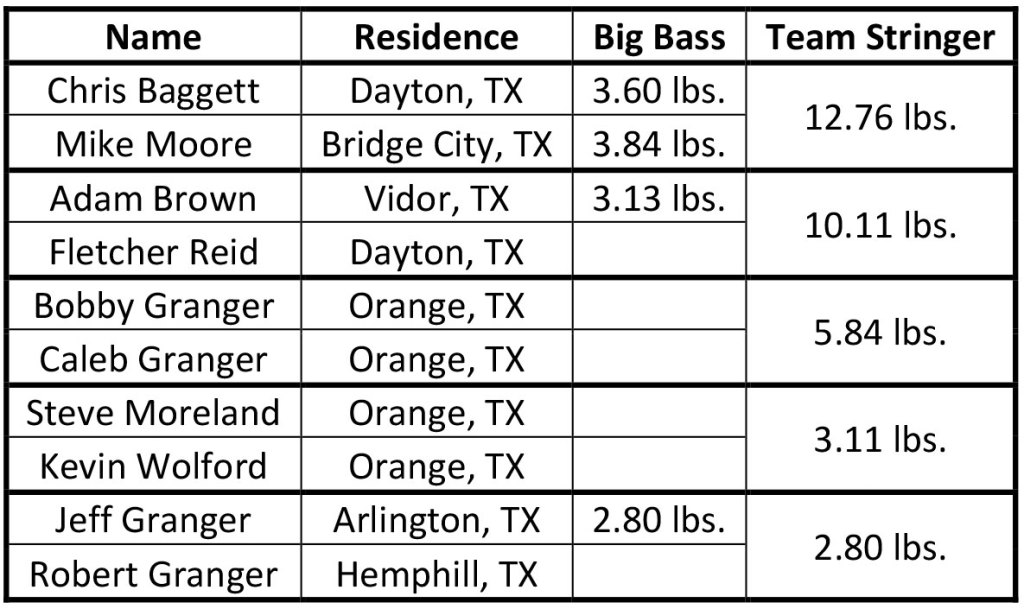 ORANGEFIELD — GetDaNet Fishing Club held its January tournament on Saturday, January 16, 2016 at Toledo Bend with weigh-in at Six Mile Public Boat Ramp. Windy, cold conditions put a damper on most of the good bites, but it wasn’t enough to dampen the spirits of club participants.

Partners Chris Baggett and Mike Moore once again topped the standings with a winning bag of five fish weighing 12.76 lbs. The pair also lead the Big Bass portion of the event with Moore turning in a 3.84-lb. 1st-place specimen and Baggett submitting a similar 3.60-lb. 2nd-place fish. GetDaNet’s results are starting to sound like a broken record as these two have dominated the competition in all three club tournaments to-date. However, several returning hunters have vowed to give them a run for their money in February.

Adam Brown and his partner Fletcher Reid brought in a respectable bag weighing 10.11 lbs. to claim the 2nd-place spot. Brown also rounded out the Big Bass top three with a 3.13-lb. fish. The father-and-son team of Bobby and Caleb Granger claimed the 3rd spot for team stringer with a 5.84-lb. weight.

GetDaNet is now planning for its February tournament to be held on Lake Sam Rayburn out of Cassells-Boykin Park on February 13, 2016.