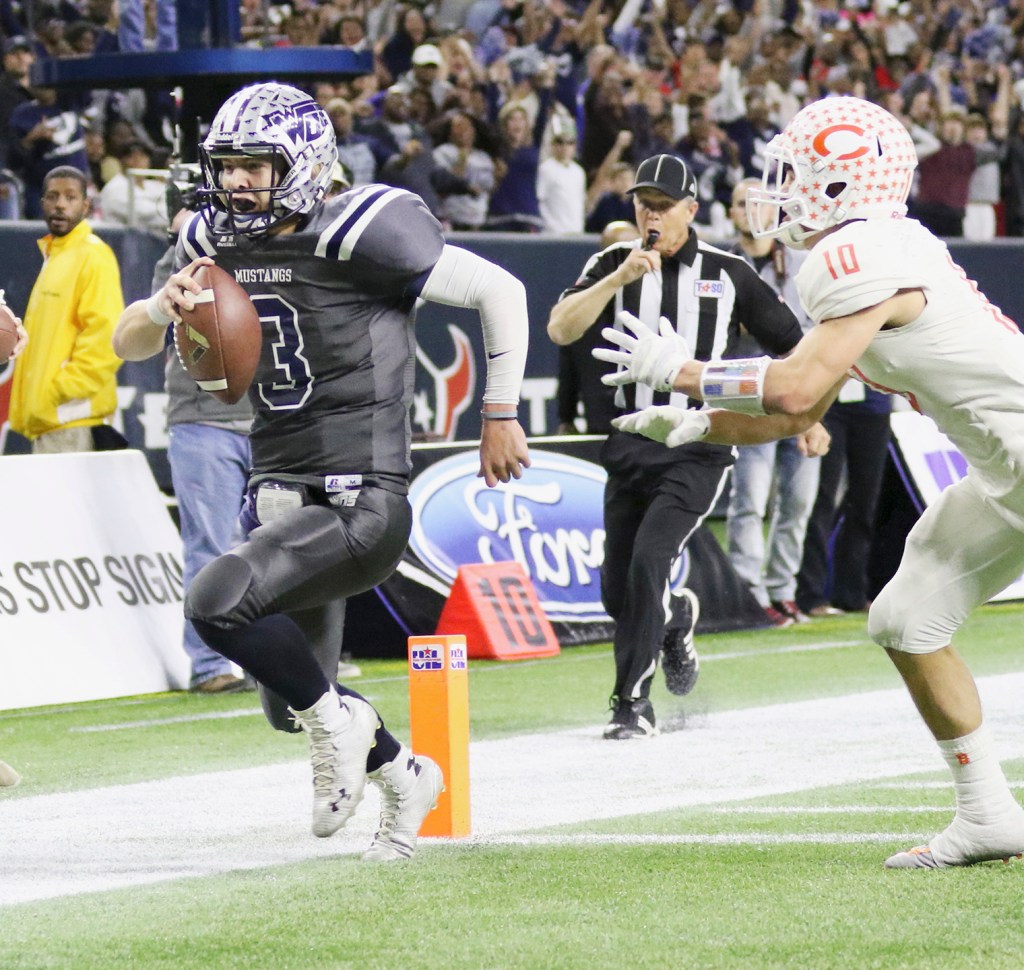 When football fans look back at the 2015 football season there will be plenty of wonderful memories to look back on.

I know that I always see plenty this time of the year when we pick the All-Orange Leader Football Team.

Especially if you are fans of the Blue and Silver.

The West Orange-Stark Mustangs brought us the ultimate game and brought home the ultimate trophy as the Mustangs captured the Class 4A Division II State Football Championship.

The Mustangs (15-1), who defeated previously undefeated Celina 22-3 in the state title tilt, accomplished some redemption as well after falling just short in the 2014 title game.

Many folks thought this year’s Mustangs would be good but not “state-title good.” After all, WO-S returned just one starter on offense and four on defense.

Well, the rest was history as long-time coach Cornel Thompson led his troops through the fray with relative ease.

All the Mustangs accomplished was setting a school-record in scoring, piling up 671 points. The outscored their opponents by a whopping 671-168 margin. Even better, they dominated throughout their six postseason games, outscoring the opposition 284-62.

Perhaps the scariest part for next year’s opponents is that the Mustangs have more than 80 percent of their starters back as they look to make another run.

Of course, Coach Thompson lands our Coach of the Year honors. In his five years running the show, the Mustangs have at least reached the regional finals, two State Championship appearances and he has a 62-11 record now.

To win at the ultimate level, you have to have a tremendous field general to make things flow.

Dallas completed 209-of-321 passes for 3,113 yards to go along with 38 touchdowns and just seven interceptions. He also rushed for 207 yards and six scores.

We look for Dallas to continue to smash the WO-S record books next season.

Offense can win a lot of games but many people think defense is what wins championships.

Well, the Mustangs allowed just 201.2 yards a game this season.

It was definitely a total team effort across the board for the Mustang Chain Gang Defense but there is usually one player that coaches like to call the “bell cow.” For the Mustangs this year, it was senior linebacker Steven Tims, our Defensive MVP. All Tims did was put together 212 total tackles as Mustang opponents had nowhere to hide.

There is also a player that rises up when no one expects it and puts together an amazing season. This year it was definitely WO-S receiver Thomas Wallace, our Newcomer of the Year.

Wallace, who did not play the game as a junior, hauled in 54 catches for 984 yards and a whopping 17 TDs.

The best turn-around story in Orange County has to be the Bridge City Cardinals and what they accomplished for first-year coach and Bridge City alumn Dwayne DuBois.

After going 4-16 the previous two seasons, the Redbirds soared to a 7-4 mark and a trip to the playoffs and were competitive all season long.

DuBois definitely installed a “We Believe” sense of attitude into the Cardinals and it showed throughout the season on the field and in the community.

Of course, DuBois had a little help from his son Camden DuBois, our Offensive Player of the Year.

DuBois started for his father two years at Hardin-Jefferson in leading the Hawks to back-to-back playoffs before leading the Cardinals back into the postseason fray.

Camden helped his new Cardinal teammates understand the new running philosophy and the Cardinals ran it to perfection almost from the very beginning.

Over in Orangefield, the Bobcats made their third straight playoff trip for Coach Josh Smalley, defeating Houston Worthing to win their second straight bidistrict playoff game in two years before falling to Giddings in the second round.

The Little Cypress-Mauriceville Battlin’ Bears and Vidor Pirates both finished with 3-7 records.

Both squads fought hard in every game and lost several contests. Both schools have some exciting players coming back next year and the playoff door could open up for Orange County’s two biggest schools.

Before we head to the Team, special thanks need to go out to a wonderful crew.

Then there were our old mainstay photographers in Mark Pachuca and Troy Jones along with Joey Dupuy, who brought us excellent game shots and fan shots throughout the season.

None of this would have been accomplished unless we had the great guys listed above for all of their hard work and dedication.

So without further ado, let’s get on with the elite team that represented Orange County so well:

Here is the 2015 All-Orange Leader Football Team as selected by the Leader football staff: