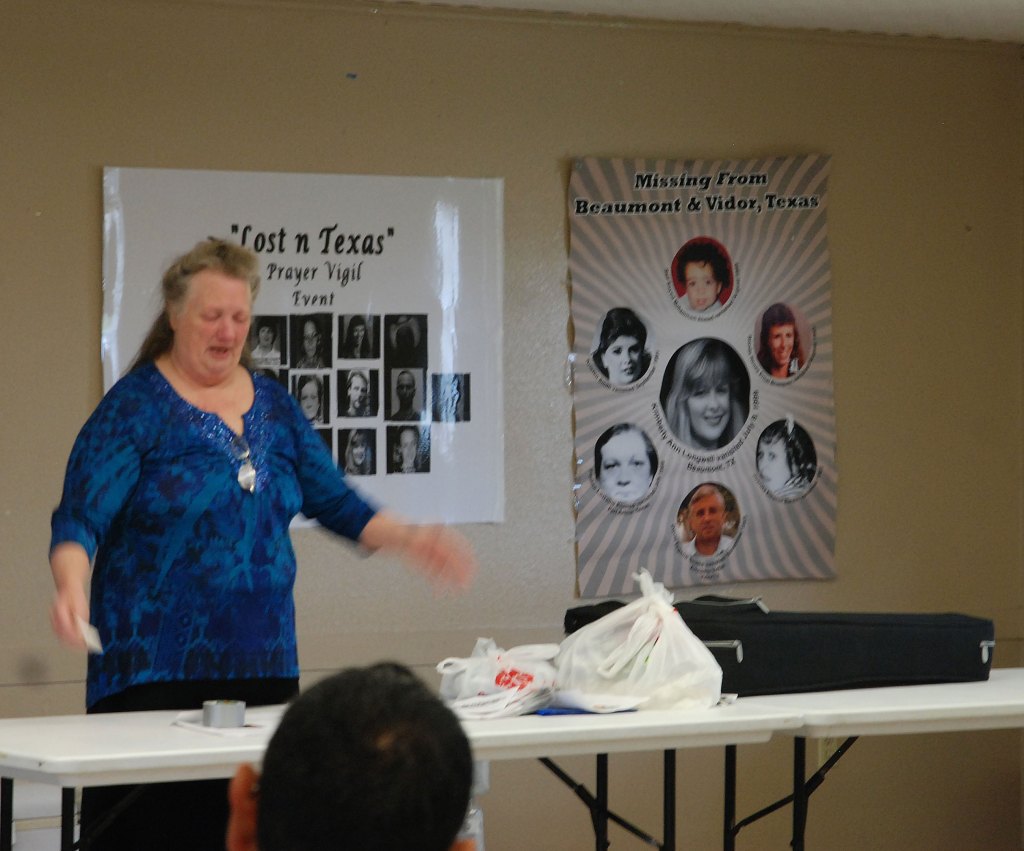 As families gather together to enjoy the holidays, other families spent the day after Christmas praying for loved ones who have disappeared without a trace during a “Lost in Texas” Prayer Vigil held Saturday at the Community Center at Gould Park in Vidor.

DeDe Keene, a two-time survivor of abduction and kidnapping, is founder of A.M.A.L.P MINISTRY (America’s Missing, Abducted and Lost Persons) and the Saturday event organizer. Keene has volunteered as an advocate for the missing, murdered and unidentified persons for 16 years.

“It is my calling, my ministry,” Keene said. “The families need all the help they can get.”

Keene said she works with law enforcement and not replacing them.

“Law enforcement are my biggest heroes,” Keen said. “They saved my life.”

Two police officers found her in a frozen meat locker when she was kidnapped at seven years old. Neighbors spotted her entering the store and noticed she did not leave when they called the police to report the incident at approximately the same time her mother called to report she never returned home after school.

Keene said she cried until the tears froze on her face after a man, who was later caught, locked her in the freezer at a store.

“It can happen so fast,” Keene said. “They don’t even know it will happen until it happens. You never park next to a vehicle with tinted windows. There are predators out there. 9-1-1 is a good number and the only number to call. Knowledge and education is power.”

Keen also suggests to not go anywhere alone and to not allow anyone to walk up to you.

“You think it is not happening here,” Keene said. “But it is.”

“These are girls I know, friends of my daughter,” Crump said. “Right here in Vidor. The numbers of those missing is unbelievable. I was not aware the numbers were so staggering.”

Crump advised to stay on the phone with a family member and keep the remote for one’s car in one’s hand.

“Be aware of your surroundings,” Crump said. “Do not give them the opportunity.”

Liberty County Detective Elaine Taylor has spent the last eight years working on a cold case of Patricia Marie Small who disappeared May 11, 2002.

“You take these people home with you,” Taylor said. “It is important to stay in touch with law enforcement agencies to update your current address or there is no way to contact the family.”

Taylor said there are no current leads on the case.

Small was last seen in April 2002 as she was walking from jail. She was reported missing 30 days later.

“I will never stop looking for her,” Barbie said. “The last words she said to me was ‘I need you. I can’t make it without you.’ I will never give up.”

Every 40 seconds a child is reported missing in the United States according to DeDe Keene.

“A child is most likely to go missing on the way to school or on the way home from school,” Keene said.