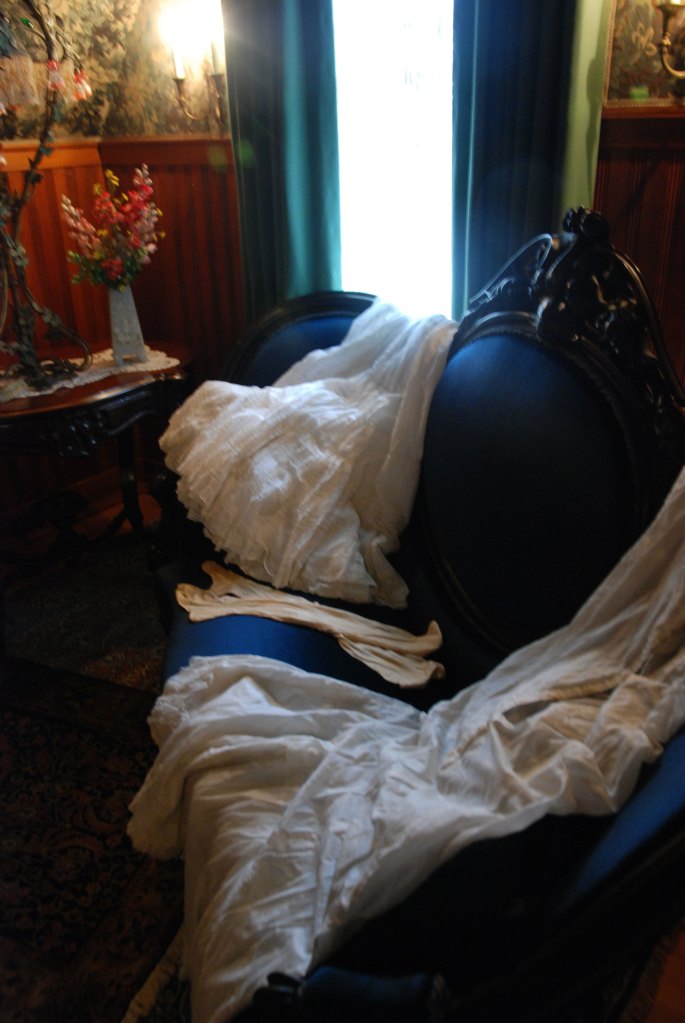 Dawn Burleigh/The Orange Leader Miriam Lutcher Stark's trousseau laid out as it may have been readied for her wedding to William Henry Stark in 1881. The display is part of the To Have and To Hold exhibition at the W.H. Stark House now in honor of the couple's 134th wedding anniversary this month.

A breathtaking view of Miriam Lutcher Stark’s wedding dress in a never-before-seen 360-degree view is at the W.H. Stark House, To Have and To Hold exhibition.

The new exhibition celebrates the classic love story of Miriam Lutcher and W.H. Stark. The Tower Room of the Stark House is used as the exhibit space, with an interactive area in the turret. The exhibition is the last stop on the regular tour, giving visitors an extraordinary experience in the historic setting.

This thematic exhibition explores weddings and anniversaries in the late 1800s and early 1900s using the experiences of the W.H. Stark family. From their December 1881 wedding to their 1931 golden anniversary party, the exhibition features rarely displayed objects from the Stark House collection and historic photographs and documents. Highlighted in the exhibition center is Miriam Lutcher Stark’s lace Wedding Dress.

The Stark’s 25th anniversary was such an event; it was reported in The Orange Leader on Friday, December 28, 1906 describing the decor of the party and a toast presented by Mr. C. E. Keppler at the end of the party.

Once on a time- thus tales begin-
For this, we’ll vouch as true
When Orange was a lovers’ realm
And young folks were wont to woo

One lovely day, ‘t might have been in June,
A young man went on a lark.
That the stamp of truth this tale doth bea
We’ll give his name as “Stark.”

‘Tis told his forte was making love;
I wasn’t here, although
It has been said by all the girls
He made an ideal beau.

With one fair lady he was bold
And said: “I love you mucher;”
To doubly stamp this story true
We’ll give her name as “Lutcher.”

‘Tis five and twenty years and more
These two have plighted troth;
And we have come with loving hearts
To congratulate them both.

The winds have been exceeding fair.
On their faces you can see
The beacon light of love hath shown
On their matrimonial sea.

Sail on, fair ship, pilot of love
Will keep you in the course;
No adverse winds can tear thy sails
With pain or dark remorse.

Let ocean waves of years roll on.
May you safely cross life’s sea.
And some of us again be here
At your Diamond Jubilee.

“With the number of guests attending, it must have been an open house,” Harris said. “The house could not hold that many people at one time. According to the guest book, 250-300 guests attended the party.”

To Have and To Hold exhibition is on view now through March 5, 2016.

W.H. Stark House is located at 610 West Main Avenue in Orange. All tours start at the Carriage House at 610 W. Main Avenue, just behind The W.H. Stark House. Parking is available in the Lutcher Theater parking lot.