Holidays are for miracles 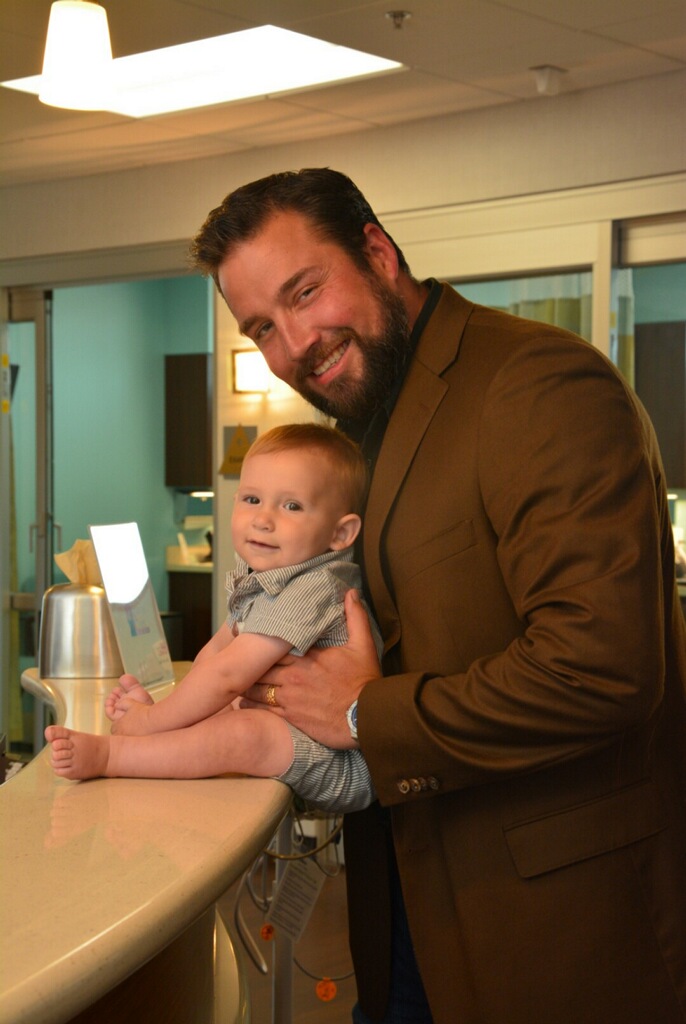 It was the evening of December 16, my son’s twenty-fifth birthday, and I was taking him and his girlfriend for a celebration dinner. That day and the day before are always a little difficult to get through, a poignant anniversary for our whole family. They are forever shadowed by the memory of seventeen years earlier while we clung together in sorrow trying not to let a little boy’s birthday, the day after we lost his Dad, be forgotten.

I drove down after work to the small town where Brad was employed as a Paramedic while also continuing to take extra college courses in pursuit of his life-long dream to get into medical school. He met me at the door, grinning from ear-to-ear, obviously bursting about something. I began to worry when he said, “Sit down, Mom. I have something to tell you.” I did so immediately, totally overwhelmed but not sure why. My first thought was, “Oh, no, he’s about to announce his wedding engagement,” but I couldn’t get past my fear to even speculate. Besides, he had just met this young lady.

His whole life flashed before my heart. My tall, dark and movie-star handsome son, every mother’s dream since the day of his birth. A dedicated Christian, intelligent, witty, always kind, always considerate of others, including most of all, me. Maybe because we lost his Dad so traumatically, so suddenly at age 34, in a deer hunting incident, and had endured its awful wake together, we had promised each other we would never make the other worry, and we both have honored that promise ever since. I have often wondered how many times he endured the teasing of his friends and girlfriends along the way because of that pact, but I also always knew it would never matter to him what anyone else had to say about it. I could count on one hand, one finger, the only rule I remembered his breaking during his growing-up years. He had given a young lady a ride home after a football game. Unbeknownst to him, she lived many miles further outside of our little town than he realized, so he got home that night fifteen minutes past his curfew, aggravated about doing so. He always made a game of getting home exactly on time, and I had known something had to have gone wrong for him to be late. I also had to giggle a little, knowing that poor girl would never have a second chance because his old truck only got eight miles to the gallon, and he wasn’t going to be spending THAT kind of money on any female. He had worked as a dishwasher before he was even old enough to get a Social Security Card and at the local grocery store after that, helping to make ends meet. Girlfriends were a whole lot easier to find than extra gas money.

Back in the moment, and seeing the utter panic on my face, the latest one said, “You’ve got to tell her–she’s scared.” Brad said, “No, Mom. It isn’t a bad thing. It’s a ‘Life is Great, God is Good’ wonderful thing.” Still grinning from ear-to-ear, he walked over to me and said, “Close your eyes, and hold out your hands.”

In April of that year, Brad had called early one morning, totally distraught, totally bewildered. He had been working a twenty-four hour shift, and his roommate had gone out of town. The roommate returned about 3 a.m., only to find their front window bashed in and their whole place burglarized. Brad rushed home, met by the local police, but thieves had already stolen laptops, computers, stereos, an extensive sound system, several guitars, electronic games, money and one irreplaceable treasure–my son’s necklace, a pendant that had belonged to his Dad those long years before. The pendant was gold, hand-crafted by my son’s grandmother, a gift for his Dad. It was an ornate circle with a beautiful deer inside and unique markings known only to our family. Insurance covered all the items stolen, but money could not replace the emotional attachment of that stolen necklace. My son was heartsick. We all were.

He and his friends searched the grounds and the woods all around their home. I sent up a mother’s prayer, feeling a little like maybe it was an imposition on God to ask but feeling helpless to soothe my son’s heartbreak. After all, it was just a ‘thing.’ “Dear Lord, You know how much that necklace means to him. Please forgive me for asking for such a material thing, but please let him find that necklace.” They found a few things the thieves had apparently dropped which made them search even harder, hoping they may have dropped the necklace, too. The city’s policemen were exceedingly thorough, interviewing neighbors, staying on the case and comparing their report to items sold to nearby pawnshops. The boys went to every pawn shop in the area and even in nearby towns, all to no avail. The pendant was gone forever, and the thieves would never know how valuable the real treasure they had taken.

But, here we were, eight months later. . . I dutifully closed my eyes, held out my hands, and my son dropped that very necklace right into my outstretched palms. I couldn’t believe it! In shock, I cried and laughed all at once, and so did he. And so did his girlfriend and his old tough buddies in the room. Then he told me the story:

Around midnight of the day before, his EMS Unit had received a 911 call and, as the Paramedic in charge, he responded to the emergency. The call turned out to be a domestic violence situation and, fortunately, the wife was more frightened than injured. The husband had already left the scene but, in such cases, EMS personnel are required to stay until the police are called and their report taken. Upon arrival, Brad stood behind the policeman looking on as he began writing down the wife’s accounting. Brad happened to glance around the room, and a shiny glint caught his eye.

He looked a little closer and, amazingly, staring him in his face, was his pendant, hanging from the horn of a deer head mounted on the wall. He says he was pretty sure the heavens opened up and a choir began to sing the Hallelujah Chorus–that he felt like God just reached down, handed him his necklace and said, “Here, son.” He grabbed it, examined it quickly, then caused so much commotion, he interrupted the policeman’s questions and asked the woman being interviewed, “Where did you get this?”

She said, “Oh, it’s been hanging there for years.”

He said, “No, it hasn’t. There’s only one like this in the whole world, and my Grandmother made it. It’s mine–it belonged to my Dad, and it was stolen from my house in April.”

She said, “Well, if you want it, you can have it. . .” (The value of the gold alone was almost $2,000. He was pretty sure it wasn’t generosity causing her to make the offer, but he didn’t care at that point. He explained later, “I just knew if God took me this far, my necklace was going home with me.”)

The policeman motioned my son outside and asked, “Did you file a police report on this?” Of course, he had, and the policeman said, “Well, usually, this would be pretty complicated for you to get back, but I heard her give it to you, so you go ahead and take it now. I’ll go look around and see if we can find the rest of the things that were stolen.”

I couldn’t believe it. He couldn’t believe it. Nothing made any statistical sense. The county had nine EMS stations. Paramedics were randomly assigned in rotating shifts on a weekly, sometimes daily, basis, to the various units. That Brad was the Paramedic on call that particular night to respond to that particular house with some obvious connection to the thieves, and he happened to have a few spare minutes’ time to even look around, something he normally would never have done, to even glance upon his own necklace, was unfathomable. But, here it was, in my own hands. We were beyond thrilled; we were in awe. And then it hit me.

I was totally overcome in realization and tears as I asked, “Oh, Brad, do you know what day that was?”

And I remembered back, his Dad so excited at a present he had bought for his son’s eighth birthday the next day. He didn’t live to see that day or to give his son the present for that birthday, but seventeen years later, to the very day, for reasons we will never understand, we believe God let his Dad give back to his son the necklace that had been stolen, the same one his Dad was wearing when he was killed.

On the way home that night, still in disbelief at the unfolding of events, I remembered yet one more incredible detail, and I called my son. “Did you say your necklace was hanging on a deer head?”

He laughed, and I could see his grin all the way through that cell phone, “Yeah, Mom, pretty cool, huh?”

We never knew all the details of that fateful shot, and the ‘why’s and ‘what ifs’ have haunted us all through the years. But, somehow, Brad’s miraculous gift has made us all know that Dad’s okay and watching from somewhere the son he still loves–with his same sense of humor at that.

We never knew the outcome of the policeman’s investigation as to the other items burglarized. Dr. Brad Barton graduated in May, 2009 from the University of Texas Medical School at Galveston and from Emergency Medicine Residency in Corpus Christi, Texas in 2012. He is the Medical Director at the Golden Triangle Emergency Center in West Orange/Orange County, Texas and also provides ER care at Christus-St. Elizabeth in Beaumont and St. Mary’s in Port Arthur. He and his wife, Julie, and family live in Bridge City. He rarely takes off his Dad’s necklace. 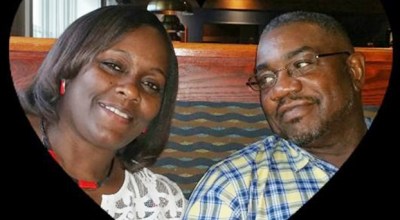