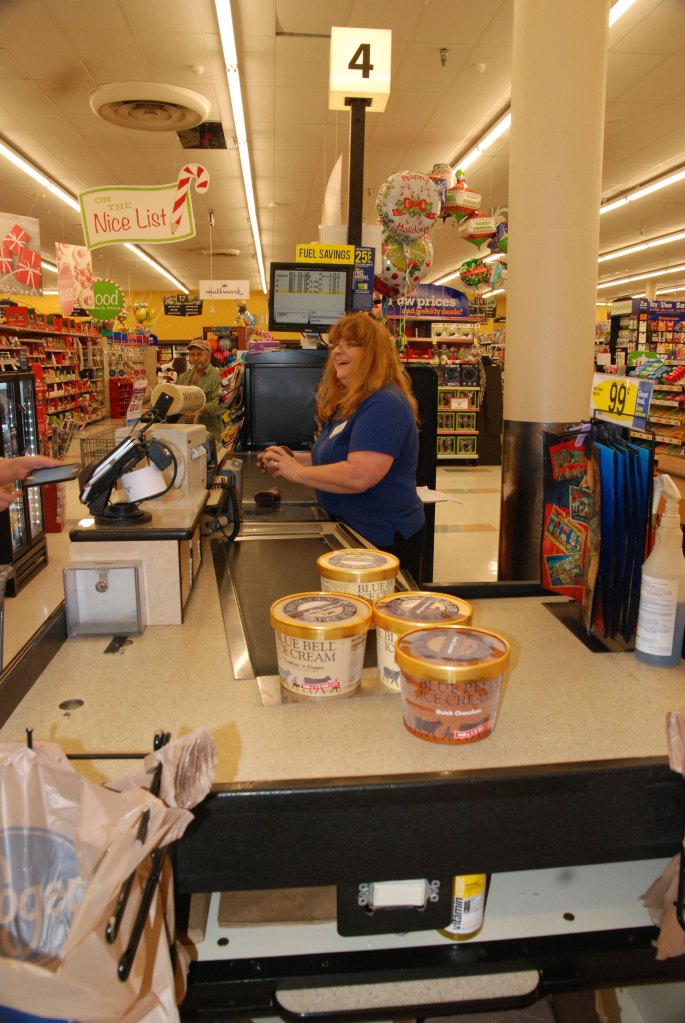 ORANGE — A truck full of Blue Bell ice cream was behind schedule on Monday but that did not stop residents from waiting for the delicacy.

Lacey LeMoine, business manager of the Greater Orange Area Chamber of Commerce, was among the first residents in Orange to purchase Blue Bell ice cream on Monday morning.

“I am very excited to have it return,” LeMoine said. “I introduced my 2 year old to Cookies ‘n Cream.”

LeMoine said she was purchasing ice cream for an ice cream party for the Executive Board of Directors at the Chamber.

“We are scheduled for a truck every day this week and next to get us through the launch,” Kroger Manager Ashley Barnhardt said.

With every other purchase Monday morning at Kroger’s consisting of one or more flavors of Blue Bell, the extra shipments will be well received.

One woman said she has missed Blue Bell.

“I went to another store and they had none,” Stacey Peoples said. “I came to Kroger’s and went straight to the Blue Bell.”

Peoples said she had a blackberry cobbler at the house waiting for the ice cream.

Joe Fontenot said he cheated and purchased some ice cream in Houston.

“I have not had any since they quit and that has been a long time,” Fontenot said. “Today, I came in just to get some Blue Bell.”

Fontenot purchased a half-gallon of his two favorite flavors, Strawberry and Vanilla.

Blue Bell began in 1907 as the Brenham Creamery Company.

Residents have questioned why it has taken so long for Blue Bell to return.

“We wanted to make sure we got it right,” according to Blue Bells official website. “All of the enhancements made in our facilities to procedures and equipment, and a “test and hold” procedure where ice cream is not distributed until the production run is tested, are designed to ensure that the ice cream we distribute is safe for consumers to enjoy.”