Mustangs all set for State matchup with Celina 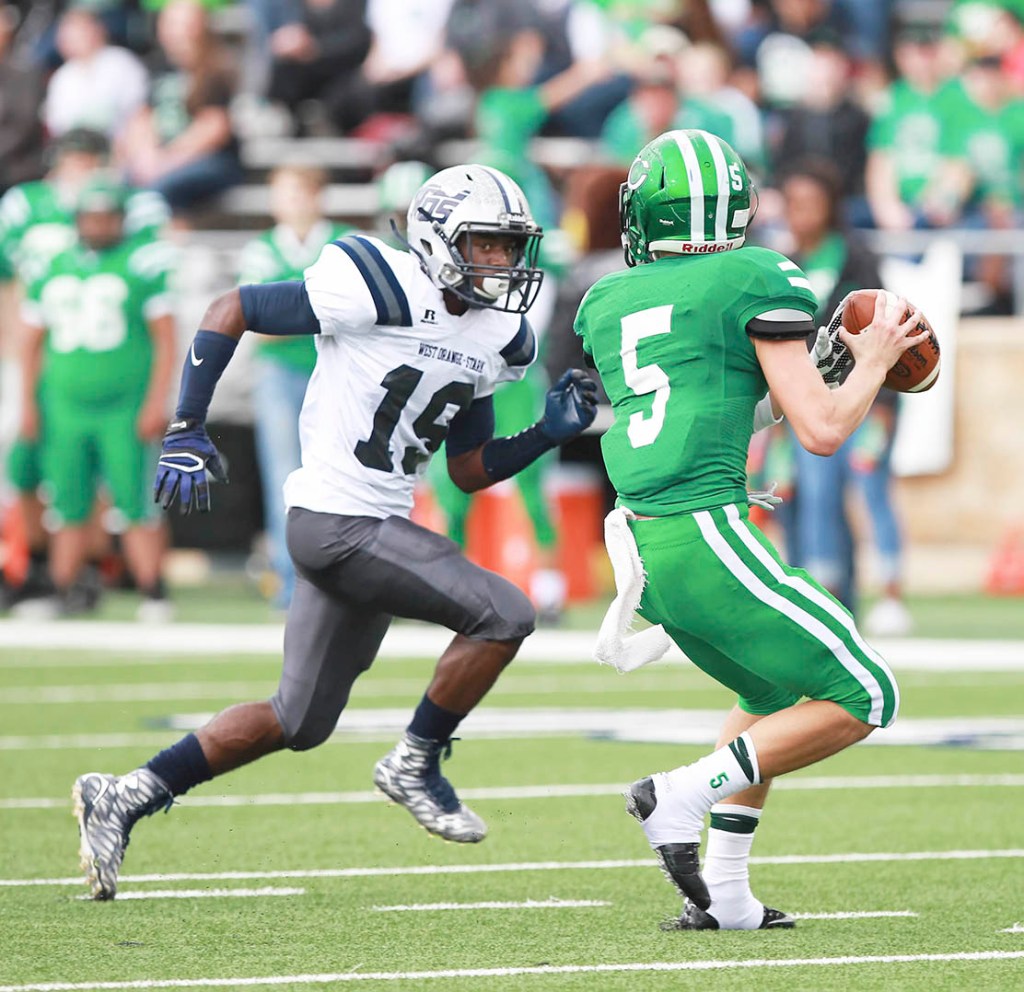 WEST ORANGE — Looking back at the West Orange-Stark football season, it wouldn’t be hard to say that the Mustangs have exceeded expectations.

After all, the Mustangs returned just one starter on offense and four on defense from last year’s Class 4A Division II state runnerup squad.

Well, here the boys in the Blue and Silver sit once again, getting ready to play for another State Championship.

The Mustangs will try to bring home the state hardware Friday when they take on the tradition-rich Celina Bobcats (15-0) for the 4A Division II State Championship at 2 p.m. at Houston’s NRG Stadium.

The Mustangs will look to band together yet again for coach Cornel Thompson as they look to knock Celina from the unbeaten ranks.

“There is no question that two quality programs with a long and rich history will be going at it,” said Thompson. “Celina has won the whole thing seven times and this will be our sixth trip. Both teams definitely earned this trip. The team that plays the best for 48 minutes and makes the least amount of mistakes are going to come out of there with a victory Friday.”

Thompson and the Mustang staff is so proud of a team that is full of underclassmen, especially with a big junior class.

“A lot of people thought way back when the season started that we wouldn’t make it this far but the kids believed in themselves, believed in what we were teaching and just kept on improving and improving. It’s hard to consider them young anymore. They’ve matured so much through two scrimmages and 15 games, it’s like most of them have already graduated to the next class with the experience they have had.”

This will be the sixth state title appearances for the Mustangs. WO-S brought home titles in 1986 and 1987 and were state runnerups in 1988, 2000 and last season.

The Celina football program knows all about making state trips.

“You’re talking about a program that knows only one thing, and that’s winning,” said Thompson. “We have so much respect for what they do. They are fundamentally in sound in what they like to do in all phases of the game. It’s going to be a dogfight but our kids can’t wait for the challenge. We’re going to work hard in practice, remain physical and most of all, be mentally prepared, which, with this week, we feel the kids should have no problems with.”

The Mustangs, meanwhile, have downed opponents by a 649-165 count with the 649 points being a school record.

They have dominated in the postseason with a 262-59 advantage.

“They (Celina) have put up big numbers all year long,” said Thompson. “We have also, which should make for a great matchup. They’ve had a good playoff run. Like us, their first four playoff wins were by big margins until they ran into Gilmer. We needed a game like we had against Cuero last week to test us too.”

The Bobcat offense have big-played opposing defenses into submission with their spread attack and are very balanced, just like the Mustangs.

Celina will face a Mustang defense that has allowed just 200 yards a game, 179 in the postseason.

“They (Celina) are a spread team and they also add a little Slot-T flavor to it too,” said Thompson. “They like to run a lot of misdirection-type stuff and really like to keep defenses on their heels.”

Quarterback Conner Pingleton has completed nearly 75 percent of his passes. He has completed 209-of-280 passes for a whopping 3,463 yards with 45 touchdowns and just nine interceptions.

Pingleton is also the squad’s leading rusher with 894 yards and 10 TDs on 109 carries.

“The Pingleton kid has a good arm, throws the deep ball well and is good hitting those short routes,” said Thompson. “He also has the knack of taking off and doing something with it. He’s a good one, for sure.”

The Bobcats certainly spread the wealth with their running game.

“The Watson kid is definitely their deep threat and he has some wheels on him,” said Thompson. “Nebeker is a good one too. They have a host of kids they get the ball to, both from the backfield and at the receiver positions.”

The Mustang offense has been putting up big numbers as well throughout the season in averaging 396 yards a game.

Mustang junior quarterback Jack Dallas is approaching the 3,000-yard passing mark in what has been an amazing season.

All he did last week was complete 15-of-23 passes for 268 yards and five TDs against Cuero.

Receiver Thomas Wallace is inching close to a 1,000-yard campaign after he hauled in five catches for 204 yards and four scores last week.

Thompson compares the Bobcat defense to the likes of Newton in our area.

“They like to run that old pressure style of defense where they come right at you, just like Newton has done with success over all these years,” said Thompson. “They also seem to do well at creating turnovers. Turnovers and penalties will be crucial in a game like this.”

Thompson is looking forward to a big following from the Mustang faithful and fans from across Southeast Texas come Friday.

“Our support, especially over the last several weeks, has been amazing,” said Thompson. “It was so great to turn around and look up at Tully Stadium last week and see that big old crowd despite the weather conditions. Our kids are so proud to represent good old Orange, Texas and love all the support that they have received and look for even more this week.”

Thompson can’t wait to prepare for what he likes to call his sixth “rodeo.”

“You remember all of them,” said Thompson. “Some coaches don’t ever get to make it to the big one and I’m fortunate enough to be in six of them. But you can’t win the Kentucky with a mule and I’ve been blessed with some amazing talent here at WO-S over the years. The great players always come to people’s minds but it’s those good players that bring their lunch pail with them every day and get after it that really is the biggest factor. This group’s work ethic has allowed them this opportunity and hopefully we can come back with something special.”