Cormier does it all for the Mustangs 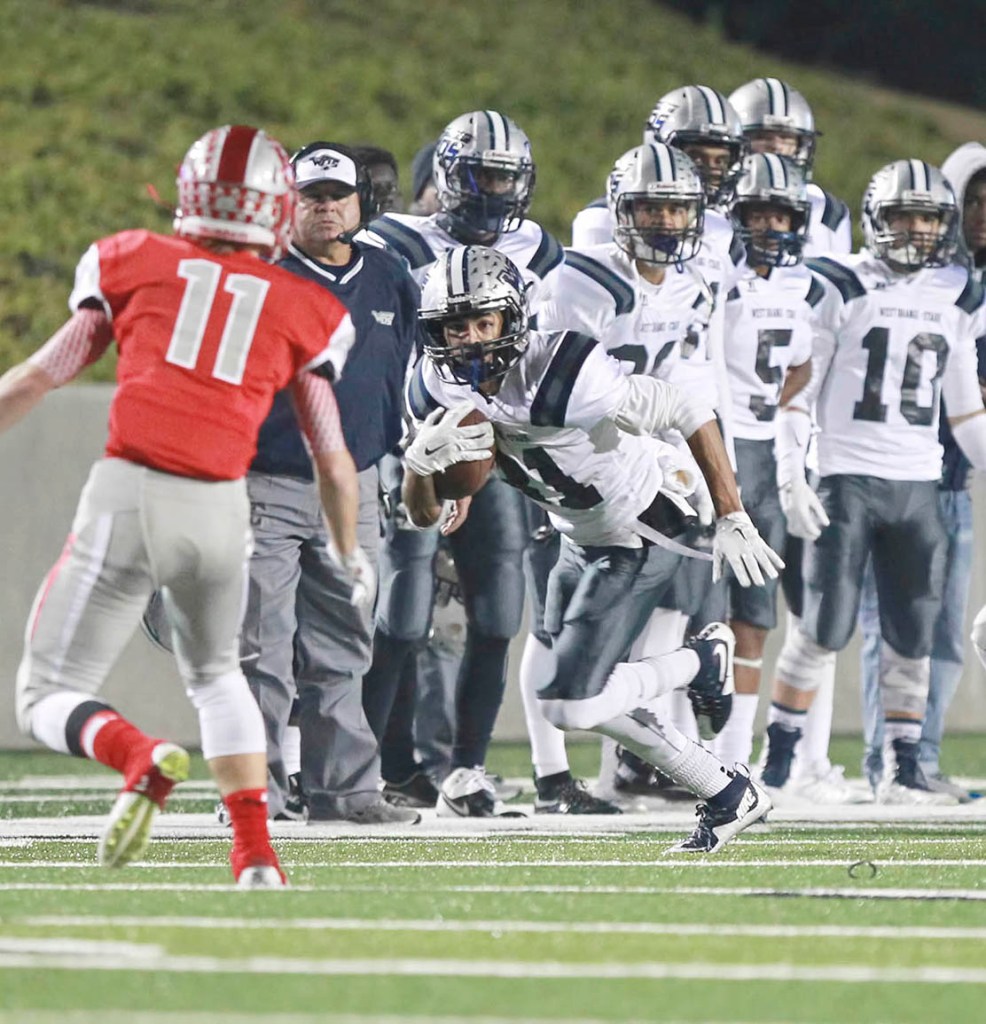 WEST ORANGE – Going into his senior campaign, Aric Cormier was determined to do a little bit of it all for the West Orange-Stark Mustangs.

After all, Cormier wanted the boys in Blue and Silver to get back to the Class 4A Division II State Championship Game.

Well, the young man and his Mustang teammates have reached that accomplishment as WO-S (14-1) will take on the Celina Bobcats (15-0) at 4 p.m. Friday at Houston’s NRG Stadium for the 4A Division II crown.

“It’s so sweet to be back to the big game,” said Cormier. “We’ve worked long and hard to reach this point. We still have some unfinished business and that’s winning the whole thing because we came so close last year. Celina is an amazing team too and we know they’re hungry too. It’s going to be a good game and hopefully we can pull through and bring back a big trophy to WO-S.”

Cormier has dabbled in every phase of the game, from offense at receiver, to defensive at defensive back, and plenty of special teams duties as well.

On defense, Cormier has notched 46 tackles with two interceptions and six pass breakups.

Offensively, he has hauled down 25 receptions for 254 yards and two touchdowns.

“Aric is one of those kids that’s hard to get off the field because he can contribute in so many ways,” said Mustang coach Cornel Thompson. “He is one of our seniors that has been a leader for a young football team. He knows what it takes to win.”

Cormier loves all of the playing time.

“I like to be part of the flow of the game at all times, helps keep me focused on both sides of the ball,” said Cormier. “The thing about this team is that we are deeper than we were last year and we get a little more rest to stay fresh. I’m happy that the coaches have faith in me to get it done.”

Cormier feels that hard work ethic has paved the Mustang program to the success it has achieved over the years. The Mustangs have reached at least the Region III Finals for five straight years.

“No other program works as hard as we do, we really feel that way,” said Cormier. “Coach T (Thompson) and all the coaches are great at keeping the same routine week after week going way back to the offseason program. We know what we have to do on Monday through Thursday and what to do on Friday nights. It’s all about repetition, consistency and desire and we have all of that.”

Cormier has plenty of memories of another huge season, mainly the five straight playoff wins. His favorite personal play came back in non-district action against Jasper.

“I had a big interception against Jasper,” said Cormier. “I almost brought it a long way back for a touchdown but got caught at the end. It’s a play I will always remember.”

After facing Slot-T and power teams throughout most of the season, including’s last week against Cuero in which the Mustangs won 41-28 in the semifinals, WO-S’ defense will face a Celina team that runs the spread along with Slot-T and Power-I formations as well.

Celina quarterback Conner Pingleton has amassed nearly 4,400 yards of total offense on his own, including 3,463 yards passing and 894 rushing.

“It has been awhile since we’ve seen such a versatile offense,” said Cormier. “They run their offense well and I think our defense runs very well too. It’s going to be a good matchup. We just have to stay on our assignments and pursue the football and try to create some turnovers.”

Cormier is hoping a huge WO-S following at the game will energize the Mustangs even more.

“We always bring energy to the game because we all love to play football, we’ve been doing it for so long,” said Cormier. “But there is nothing like looking back behind you and seeing those big crowds cheering and waving. The support we’ve had so far has been great, especially the last few weeks. We would love to see a lot of blue filling the stadium Friday and everyone else from Southeast Texas.”

To bring home some Championship hardware would be really sweet for the senior.

“It’s been a special year,” said Cormier. “Nothing would be better than bringing home a state title during our senior year. This week is a little emotional. Each day will be last day of practice on a Monday, Tuesday, Wednesday and Thursday. It’s memories that will last the rest of our lives.”