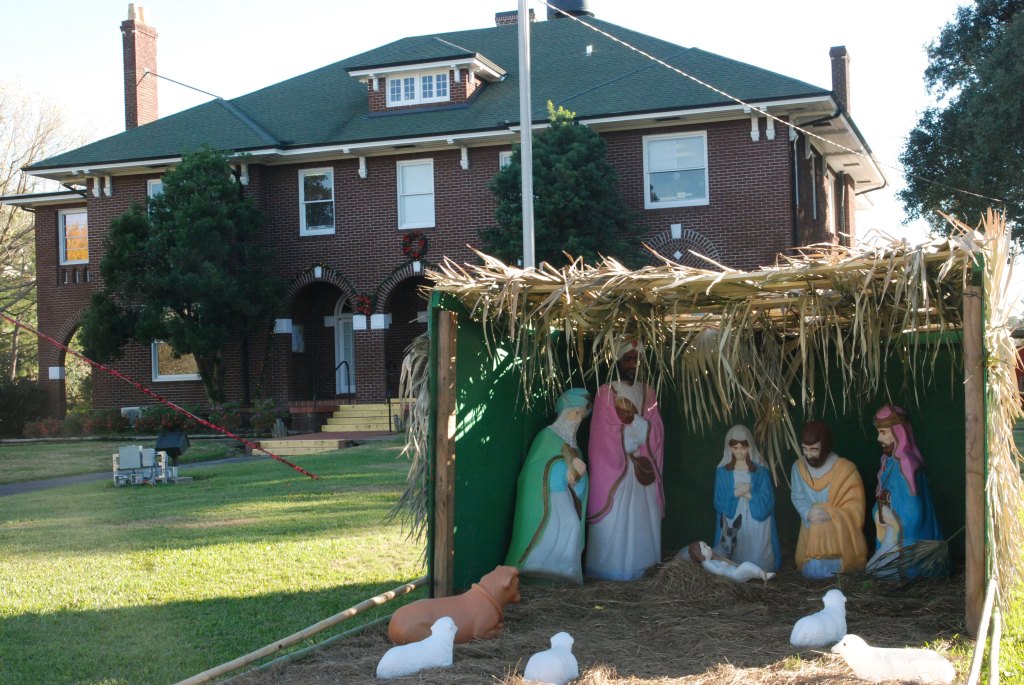 Dawn Burleigh/The Orange Leader A Nativity scene, which has been a long standing tradition on the lawn's of Orange's City Hall, will soon be removed to avoid the legal costs associated with defending the placement of the Nativity scene and focus on the true meaning of Christmas.

ORANGE — A long-standing tradition will be removed from the Orange City Hall property to avoid legal costs associated with defending the placement of a Nativity scene at the location.

However, citizens are taking a stand by singing Christmas carols at 6:30 p.m. Thursday at the location where the Nativity scene stood for as long as residents can recall.

In a press release the city said a request was made to place a banner in front of City Hall from the Orange County Atheists on December 9, 2015. The request was denied.

A demand to remove the Nativity scene was not made according to Orange County Atheists of Texas Facebook page.

Based on this request, the City reviewed current case law. Supreme Court decisions have tried to address this question in an array of decisions but there is not a clear case that gives affirmative direction to displaying the Nativity scene. This makes it difficult to formulate a policy for Christmas decorations on City property. Based on this and knowing that the Constitution makes a distinction between church and state, the City will be removing the Nativity scene to avoid the legal costs associated with defending the placement of the Nativity scene and focus on the true meaning of Christmas, according to the city of Orange press release.

“As the U.S. Supreme Court has continually held, public acknowledgement of our religious heritage is entirely consistent with the Constitution. The Constitution commands accommodation of religion rather than hostility towards it,” Texas Governor Abbott said. “I strongly encourage the City of Orange to stand up to the demands of a select few who wish to see God thrown out of the public square, embrace the season of Christmas and restore the Nativity Scene immediately.”

In December of 2014, then Attorney General Abbott offered legal support to Cherokee County in their fight to keep their Nativity Scene following the American Humanist Association’s letter requesting it be taken down.

“I encourage the city to not buckle under and gave him the names of organizations that will fight the atheists,’ Babin said.

Texas House Member Representative for District 21 Dade Phelan said residents should stick together as a community.

“I placed a white cross in my office and you would have thought I burned the building down,” Phelan said. “I was not establishing a religion. It represents me in my faith, as a helmet represents a football team.”

Father Sinclair Oubre, of St. Francis of Assisi in Orange, said it is important to look at the law even if one does not like it.

“It is possible to have a holiday theme in a public square,” Oubre said. “But the city would have to keep it safe and purchase the different symbols. It would be embarrassing and scandalous if one of the symbols was vandalized.”

Oubre also said residents should look to their selves and how they are celebrating Christmas.

“We need to re Evangeline ourselves,” Oubre said.

The number of Americans who do not identify with any religion continues to grow at a rapid pace. One-fifth of the U.S. public – and a third of adults under 30 – are religiously unaffiliated today, the highest percentages ever in Pew Research Center polling.

In the last five years alone, the unaffiliated have increased from just over 15 percent to just under 20 percent of all U.S. adults. Their ranks now include more than 13 million self-described atheists and , nearly 6percent of the U.S. public, as well as nearly 33 million people who say they have no particular religious affiliation, 14 percent, according to PewResearchCenter.

“The Orange County Commissioners Court is under no legal obligation to remove the Nativity scene outside the county courthouse during the Christmas season,” Paxton said. “The U.S. Supreme Court has consistently held that passive public displays – such as Nativity scenes – acknowledging our nation’s religious heritage are constitutional. My office stands ready to provide appropriate legal support to the city and the commissioners court.”

Attempts to reach Orange City Manager have been unsuccessful by press time.

Courtesy photo
Orange County Atheists of Texas requested this banner to be placed on city hall property in Orange, Texas. The request was denied.