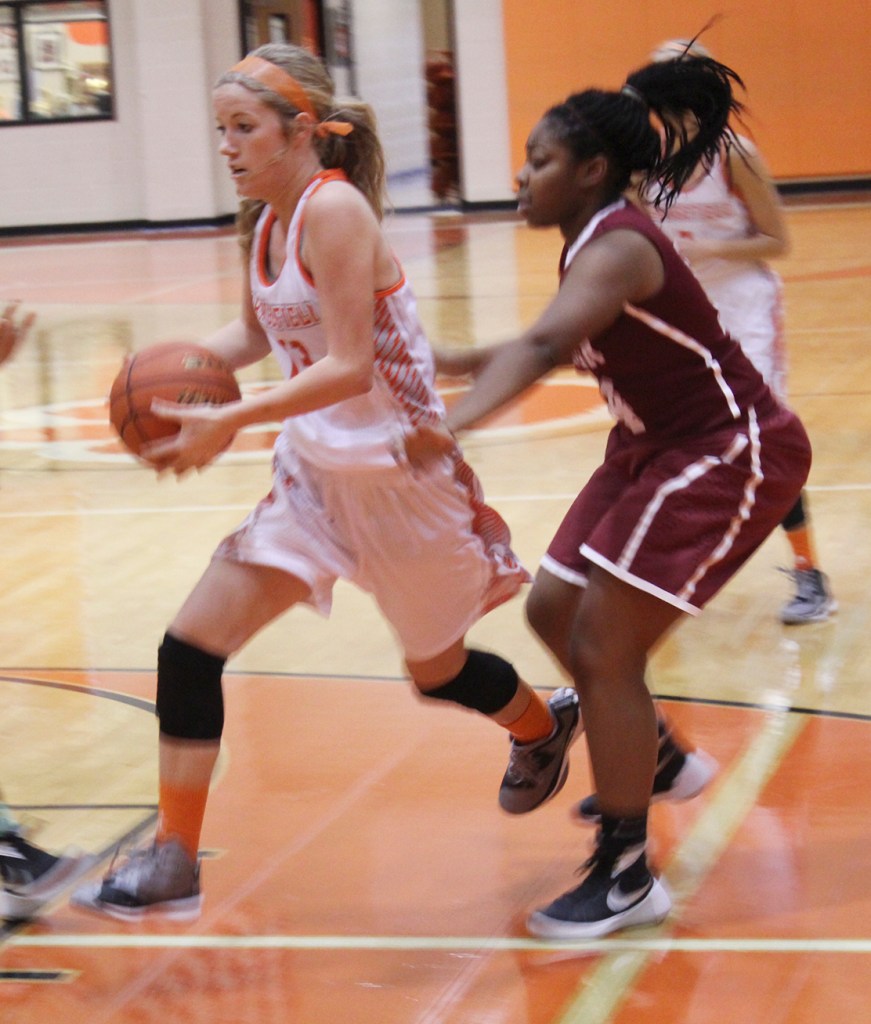 ORANGEFIELD — The Bill Tennison Memorial basketball tournament got off to a hot start in Orangefield on Thursday. The host teams picked up early wins and there was plenty of big shots to be seen.

Orangefield Lady Bobcats drew the Lady Bulldogs from Jasper as their first match up of the day. The Lady Cats never looked back after the opening tip as they excited the home town crowd early and often with well played defense, but it was a fiery hot offense that seemed to not miss that drew the crowd. It was senior, Hanna Lowe that accelerated the offense throughout the match. She notched 16 points in the first half which gave the Cats’ an early lead which the Lady Bulldogs could never recover from. The Lady Bobcats went on a 16-0 run to end the first half.

Jasper attempted to rally opening the second half with a quick lived 6-0 run, but freshman Lady Bobcat, Emmi Lummus, hit a long range jumper to end a four minute scoring drought for Orangefield. Lummus continued to spark the offense with two steals that converted into six Lady Cat points and helped end the third quarter on a 10-0 run. The Lady Bobcats continued to floor the Lady Bulldogs into the fourth quarter in route to a 54-23 win. Lowe led all scorers with 22 points and chipped in four rebounds. Bethany Green knocked in 8 points while Sabryn Crain chipped in 11 points and 8 rebounds. The Lady Bulldogs got help from freshman Mikayla Bailey who led the team with 10 points.

The Bobcat boys squad got underway following the girls game and they’d clash with a well-coached Evadale Rebels team. The Bobcats fell behind early when they were unable to get shots to fall and failing to crash the boards. They trailed 10-5 at the end of the first quarter. Matthew Watkins ignited the stale offense with two steals that led to two fast break buckets to open the second quarter. Payton Lathrop followed with two buckets of his own to tie the game at 18. The Bobcats went in tied at 20 at half-time after a 7-0 run to push the Rebels onto their heels.

Wesley Frillou opened the second half on fire. He drilled a three-point shot from deep in the corner to give the Bobcats their first lead of the night. Tyler Torres helped keep the Rebels close after a drive in basket led to the shot and a free-throw attempt. Torres finished with 14 points on the day. Orangefield maintained solid shots and great looks at the basket in route to a 37-31 lead after three quarters of play. The Rebels went stale shooting just 3-12 in the fourth while the Bobcats continued heavy pressure and an 8-0 run to put the game out of reach. Lathrop had 16 points in the Bobcats, 51-41 win over the Rebels.

The Lady Bobcats took the floor again later in the evening. This time a tougher test awaited as the Nederland Lady Bulldogs would be slated for action. Fortunately for the Lady Cats’ they picked up right where they left off against Jasper. Stellar offensive play led to huge baskets and solid defense forced Nederland into 8 first half turnovers. Orangefield went in at half-time leading 45-24 and opened the second half with a monster three from Bethany Green. Christine Porterfield seemed to be the only Lady Bulldog that was able to produce much offense. She managed to drain 16 points on the feisty Lady Cats’ defense. Orangefield outscored Nederland 24-10 in the second half on their way to a 61-34 win. Lowe scored 17 points and 7 rebounds to continue her huge tournament play while Green who left with a left shoulder injury scored 10 points with 3 rebounds.

The Bobcat boys finished off day one of the tournament with a tough match-up against Faith Training Christian Academy. The two teams met last season and the Bobcats lost by 23 points. This time the Bobcats fell by a 54-40 score.Payton Lathrop again would lead the scoring for the Bobcats with 15 points while Aven Lathrop dropped 10 points. Watkins and Puckett combined for 15 rebounds in the tough loss.

The West-Orange Stark Lady Mustangs lost a tough contest to Tatum earlier in the day. The Lady Stangs’ along with the rest of pool will be back in action Friday with championship games to be played on Saturday.