Mustangs honed in on Cuero’s Gobblers 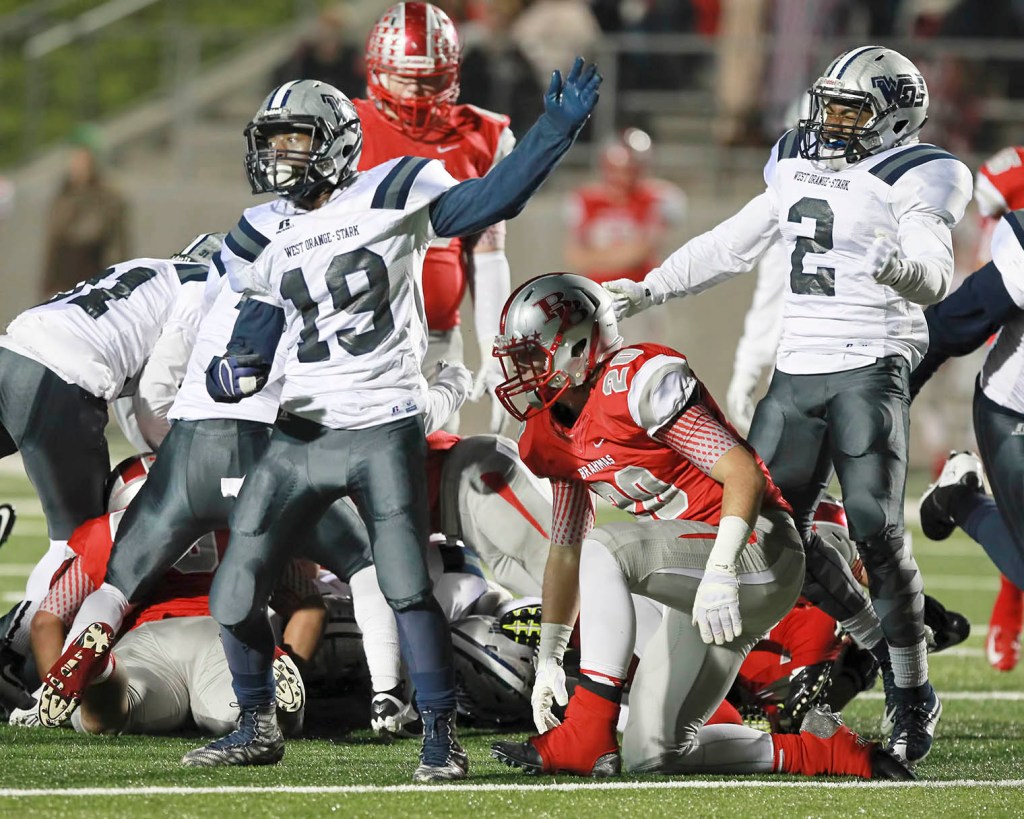 WEST ORANGE – Punching a ticket to the 4A State Championship Game.

That is what the West Orange-Stark Mustangs will try to do again today.

The Mustangs (13-1) will take on the Cuero Gobblers (9-5) for the rights of a state trip today at 2 p.m. at Tully Stadium in Spring in the State Semifinals.

The winner will take on either Celina or Gilmer in the 4A Division II State Championship Dec. 18 at NRG Stadium in Houston.

“There are only four teams left playing for that coveted State Championship trophy so to reach this point, you have to be a pretty darn good football team,” said Mustang coach Cornel Thompson. “Two excellent teams will be going at it at Tully Stadium Saturday and hopefully the Mustangs will be the ones coming out on top.”

The Gobblers have picked up steam of late after getting off to a 3-5 start. Cuero has won six straight contests and have outscored their four playoff opponents 156-48.

The Gobblers got sweet revenge against Sinton last week as they defeated their district rival 28-0 in the regional finals.

“Cuero is a much better football team then their record indicates,” said Thompson. “They had a three-game losing streak early and come to find out, they were missing about eight starters due to injuries down that stretch. They are a team that has been on a hot streak for weeks and have a pair of playoff wins over two previously undefeated teams.”

The Gobblers returned six starters on each side of the ball from last season’s 10-3 regional semifinalist squad.

The Gobblers like to keep the ball on the ground on offense, sparked by senior quarterback Elex Martinez.

Martinez has rushed for 1,332 yards and 15 touchdowns on 158 carries. He has also completed 55-of-87 passes for 569 yards and three TDs with just three interceptions.

“The Martinez kid can flat-out run,” said Thompson. “They like to stay in the power-I a lot and he can pull it down with some nice fakes and take off on you if you’re not careful.”

The Gobblers have a stable of backs to compliment Martinez.

Receiver Jordan Whittington has found time to rush for 432 yards and four TDs on 56 carries and leads the team with 32 catches for 478 yards and two scores.

“They have some athlets that compliment Martinez well,” said Thompson. “Their fullback (Hopkins) is a load to bring down. He’s a hard-nosed runner. They have a nice little speed back in the Grant kid and their receiver Whittington is very versatile.”

The Mustang defense has been doing a number on running teams throughout the season and are giving up just 188.9 yards per game during the season and a superb 136 in the playoffs.

The WO-S offense is churning out 400 yards a game with a very balanced attack across the board as the Mustangs love to spread the wealth around.

Junior quarterback Jack Dallas has completed 185-of-283 passes for 2,705 yards with 33 TDs and seven interceptions. He completed 19-of-28 passes for 270 yards in the 42-3 blowout win over Bellville in the regional finals last week.

Thomas Wallace, who had six catches for 127 yards against Bellville, is the Mustangs’ top receiver with 49 catches for 780 yards and 13 TDs.

Defensively, the Gobblers will try to check the Mustangs in a 4-3 package.

“They’re very solid on defense,”said Thompson. “They are pretty big up front. They have a pair of nice defensive ends. Their secondary, all of them start on both sides of the ball. Watching them on film, their defense has gotten better and better. I’ve talked to a few coaches that have played them and they told me that Cuero was the most physical team they played all year.”

Right now, the Mustangs are just honing in on Cuero and not looking ahead.

“It’s so much fun to be playing this time of year,” said Thompson. “We’re the last team standing in Southeast Texas again. We’re so proud of what the kids have accomplished. A lot of people thought we would not be at this point, with such a young team and all, but here we are. The kids are excited, the staff is excited and the community is fired up. It would be awesome to be playing again next week. The kids understand that Cuero is the team standing in the way this week so all eyes are focused on them.”