One woman’s fight from darkness into light 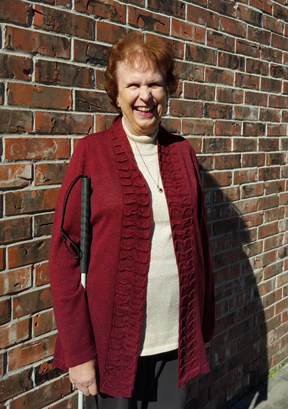 Thinking her eye glasses needed to be changed, Carol Allen, of Orange, went to her eye doctor for a new prescription.  After the exam, her doctor presented her with news that would change her life forever.

“You have lost most of your vision, and you will no longer be able to drive,” Allen’s doctor said. “Not only that, within five years, you will be blind.”

The inherited eye disease, Retinitis Pigmentosa (RP), which Allen had been diagnosed with as a five-year-old-child, had now escalated.

RP causes the retina to degenerate. People with RP experience a gradual decline in their vision because the cells known as the rods and cones die. The first symptom is night blindness followed by a decline of the peripheral vision until tunnel vision sets in.  In that stage, the person only sees a small amount of their central vision.

Shocked, Allen walked out of the doctor’s office and entered a doorway that led her into clinical depression.  Only 38 years of age at the time, this strong independent wife and mother of two young boys, began to spiral downward into a deep dark pit.  Not wanting to ask anyone to drive her to the places she needed to go, she began living in seclusion behind the walls of her own home.

One day about seven years into her new life of darkness, both physically and emotionally, Allen decided to sit outside in the sun.  As she sat there with the sun beaming down on her, she began to pray.  In her own words that follow, Allen tells her story of what happened next and in the years to come as a result of that prayer.

Instead of praying, perhaps a better word for what I was doing was whining to God. I explained to Him how unfair this eye disease was, how I felt trapped, how I felt like a prisoner in my own home, and how I couldn’t do anything for him in my handicapped condition.  Actually, I was having a big pity party.

Suddenly, I heard a voice. It was not an audible voice, but a voice within me saying, “Carol, turn your eyes on me; your life will be better.”

I knew what I was hearing wasn’t my own thoughts.  I believed it was the voice of God, but it frightened me because I didn’t know that God would speak to someone like me.  So, I thought I was losing my mind and my eyesight. But, I asked:  “Is that really you, God?  If it is, tell me how to turn my eyes on you; I don’t know how.”

So, once more the voice within me spoke:  “Go get your Bible.”

Not having clear directions of where to turn, I just opened it to The Book of Psalms and began reading. That day, I stepped out of that dark place into the light of God’s Word.

Hebrews 12:1-2 says:  “Let us run the race that is set before us, looking unto Jesus the author and finisher of our faith.”   I began to run the race set before me. I was determined that, with God’s help, I would no longer feel like a handicap, but I was convinced I was capable and able of being used by Him.

I sensed God was calling me into a teaching and counseling ministry, as He began opening up the doors for me to teach courses at my home church, First United Methodist in Orange, and speak at women’s retreats.  In addition, He gave me the opportunity to fulfill my dreams of becoming a certified counselor through Stephen Ministries. I now counsel people on a one-on-one basis in my own living room.

Though I did not go totally blind in five years as the doctor had predicted, I have continued to lose my eyesight over the years.  However, with the help of a reading machine given to me by the Commission for the Blind, I am able to read my Bible and study the material I need for teaching.

The scripture that best describes what happened to me out in the sunshine that day as I was “whining to God” is found in Ephesians 1:17-18. “May the Father of glory give to you a spirit of wisdom and revelation in the knowledge of Him, and that the eyes of your heart understand and be enlightened.”

I can say, without a doubt, that the eyes of my heart have been enlightened to know Him, and a miracle has taken place in my life.  I feel as though I have, indeed, passed from darkness into light.