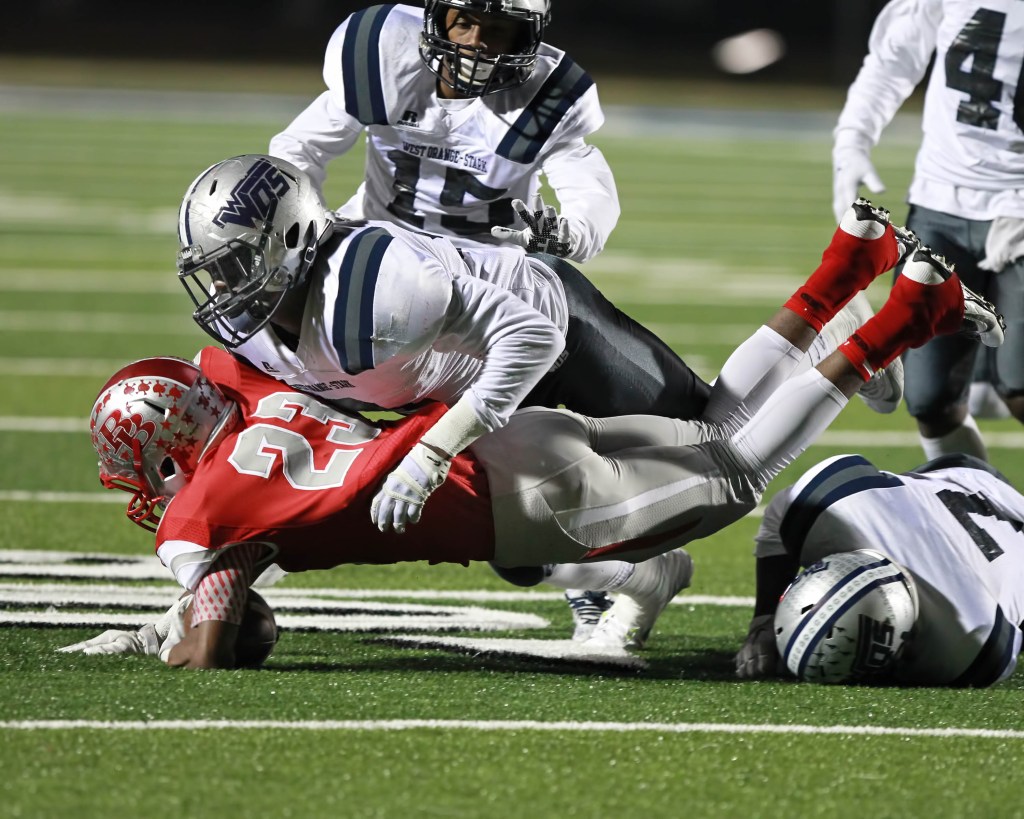 NEW CANEY – Through the first three weeks of the playoffs, the West Orange-Stark Mustangs usually began their beatdown of their opponents in the first half.

On Friday night, they waited until the second half as the Mustangs are advancing to the Class 4A Division II State Semifinals for the second straight year after a 42-3 win over the Bellville Brahmas in the Region III Finals at New Caney’s Texan Drive Stadium Friday night.

The Mustangs (13-1) move on to take on either Sinton or Cuero in the State Semifinals next week.

WO-S only led the Brahmas (11-3) 8-3 at the half after committing three turnovers. But the Mustang Chain Gang Defense rose up and the Mustang offense opened it up in the second half.

“We sputtered there in that first half with some turnovers but the kids bowed up and kept getting after it,” said Mustang coach Cornel Thompson. “We played a good football team tonight and Bellville came out early and played us hard. We finally found our intensity and were able to open things up.”

Now it is on to the State Semis again.

“There will only be four teams left after tomorrow and the kids should be extremely proud about that accomplishment,” said Thompson. “We’ll rest tomorrow and get back to the grind Monday. We still have some fish to fry and we’re just a win away from getting to the big game again. The kids are eager and hungry to get there but it’s just one week at a time and they know that and they’ll be ready to get after it in practice come Monday.”

The Mustang offense piled up 462 total yards. Quarterback Jack Dallas completed 19-of-28 passes for 270 yards and a touchdown and he rushed for two more.

Receiver Thomas Wallace hauled in six receptions for 127 yards and a score and tailback Jeremiah Shaw had 10 carries for 113 yards and a TD.

Briscoe, who had over 1,700 yards coming in, was held to 94 yards on 23 carries with most of his yards coming late.

“We knew what Bellville wanted to do, it was no secret they wanted to run right at us,” said Thompson. “We’ve faced teams throughout the year that like to do that and we were really prepared. Defensively, I thought we did a good job there in the first half from keeping them from capitalizing on our turnovers.”

Things turned the Mustangs way for sure early in the third quarter when speedy return man and receiver KJ Miller fielded a punt at the Mustang 30, cut to the right and found nothing but wide-open daylight as he sprinted 70 yards for the touchdown to hand the Mustangs a 14-3 cushion with 9:51 remaining in the third.

“That was probably the straw that broke the camel’s back right there,” said Thompson. “We’ve gotten two big punt returns for touchdowns for the second straight weeks. It’s great to see the special teams play a factor like that.”

The Mustang onslaught continued the next time they had the leather with Shaw crushing his way through three Bellville tackles and cruising to a 62-yard touchdown dart to the end zone. Dallas found Ronald Carter for the two-point conversion pass to give WO-S a 22-3 edge with 8:01 in the third.

The Mustangs ate some clock off with a 12-play, 38-yard scoring drive late in the third quarter.

Dallas hit Wallace for a 14-yard gain to the Bellville 20. Justin Brown eventually had a big 10-yard bull run to the 1 and Dallas capped it with a one-yard touchdown run, pushing the lead to 29-3 with 0:46 in the third.

After Mustang defensive back Malick Phillips picked off a Austin Maeker pass in the WO-S end zone, Dallas hit a wide-open Wallace along the left side and the senior receiver took it “to the house” on a

The Mustangs added to the Bellville misery with a 10-play, 73-yard drive late in the fourth with 61 of the yards coming on the ground.

Quinton Chargois finished it off with a six-yard touchdown dart around the left end to up it to 42-3 with 2:44 remaining.

“Our offensive group put together some big plays in the second half and settled down,” said Thompson. “They bounced back from a tough first half when we struggled with the turnovers and silly penalties. Scoring that touchdown late in the second quarter gave us some confidence going into the half.”

The Mustangs coughed the ball up the first two times they had it and three turnovers in the first 24 minutes.

Miller fumbled at the Brahmas 42 after a 16-yard reception. The Mustangs held but WO-S Jarron Morris muffed the ensuing punt and the Brahmas took over at the Mustang 28.

Bellville reached the WO-S 10 before bogging down and the Brahmas settled for a 27-yard field goal by Oscar Mendez to make it 3-0 with 4:59 left in the first quarter.

Dallas passed for 70 yards by completing 6-of-7 passes, including a 39-yarder to Miller down the left sideline. However, the Bellville defense stuffed Keion Hancock on fourth-and-1 from the Bellville 10 with 0:30 left in the first quarter.

The Mustangs finally found their balance on offense by putting together a splendid 11-play, 61-yard scoring march late in the second quarter.

Dallas found Thomas Wallace on a 18-yard pass to the Bellvile 17. On third-and-17 from the 17, Dallas rolled right and teamed up with Aric Cormier on a 16-yard dart that got down to the 1.

Dallas capped it with a one-yard touchdown sneak. Dallas followed with the two-point conversion run to give the Mustangs the 8-3 edge with 3:29 remaining in the half.

Bellville defensive back Marcus Ward picked off a Dallas pass at the Brahmas 37 and returned it to the Bellville 47 with 2:08 in the half.

Miller had three catches for 63 yards. Wallace had four grabs for 33 yards and Cormier had two catches for 28 yards.

St. Mary Teacher of The Month