Powdrill getting it done at DT for Stangs 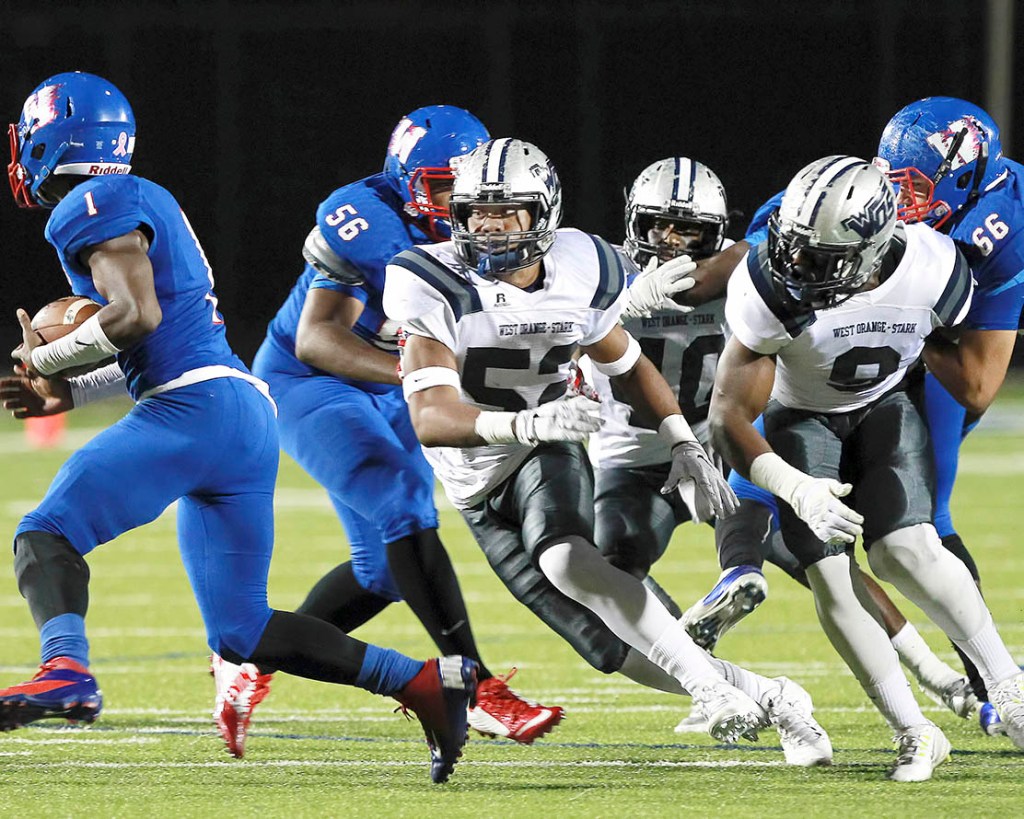 This year’s version has enabled the Mustangs (12-1) to reach the fourth round of the playoffs for the fifth consecutive year as they prepare to take on the Bellville Brahmas (11-2) in the 4A Division III Regional Finals Friday night.

This season, the WO-S defense has allowed a mere 193.4 yards a game.

They have upped the ante in a current eight-game winning streak in which the Mustangs have allowed just 37 points. That includes a 169-3 run in 9-4A play and 179-28 in three postseason games.

One young man that has made his mark is junior defensive tackle Jalen Powdrill.

Powdrill has done something unique that no other Mustang defensive tackle has ever accomplished.

“No one knows this until now, not even Jalen, but he is the first defensive tackle in school history that has recorded over 100 tackles in a season,” said Mustang coach Cornel Thompson. “With all the great players we’ve had come through here, that’s pretty impressive.”

Powdrill has notched 130 total tackles for the season. He is tied for the team lead in sacks with Mandel Turner-King with six-and-a-half and has 13 tackles for losses.

“Wow, I had no idea,” said Powdrill. “That makes me feel really good about how far I have come this year. I could have never done it without my great teammates. We open things up for one another. It doesn’t matter who piles up the tackles as long as we make the tackles.”

Thompson has seen tremendous improvement out of Powdrill.

“Before the season we moved Jalen from end to tackle and he was a little apprehensive at first,” said Thompson. “You could tell, though, that week by week he was starting to get it. Now, he’s like trying to run through a wall. He’s not only excellent at stopping the run, he can get after the passer and cause havoc too.”

Powdrill is proud to say he went through a learning curve and passed with flying colors.

“It did take some adjusting because I had always been an end,” said Powdrill. “I really took to it pretty quick and knowing the coaches believed in me made the move that much easier.”

The Mustangs remain a young team despite their amazing season. Juniors practically dot the entire starting lineup on both sides of the ball.

“We have played together for so long and we’ve all grown up together,” said Powdrill. “We have a special bond and that brotherhood that has been huge. We all push everybody to be the best they can be, whether it is at school, at practice or in games.”

The Mustangs have faced similar foes this season in Vidor, LC-M, Newton, Orangefield, Liberty and Hardin-Jefferson.

“We’ve really had success slowing down running teams this year,” said Powdrill. “Our speed and quickness off the ball is really a strength of ours. We really like to be the best run-stoppers that we can be. Nothing wrong with rushing the passer, but I love to try and stop the run.”

Powdrill was not a starter on the Mustang team that advanced to the 4A Division II State Championship Game a season ago but he remembers the emotions that went through his mind when the Mustangs hit the field at AT&T Stadium last December.

“It was special, just wish we would have came back with a ‘W’ and a state title,” said Powdrill. “Our goal all season long has been to get back to that game. But right now, it’s all about that next opponent that is in front of us. We’ve been really good at not looking past anyone. Every team left are good teams. We just have to maintain our focus.”