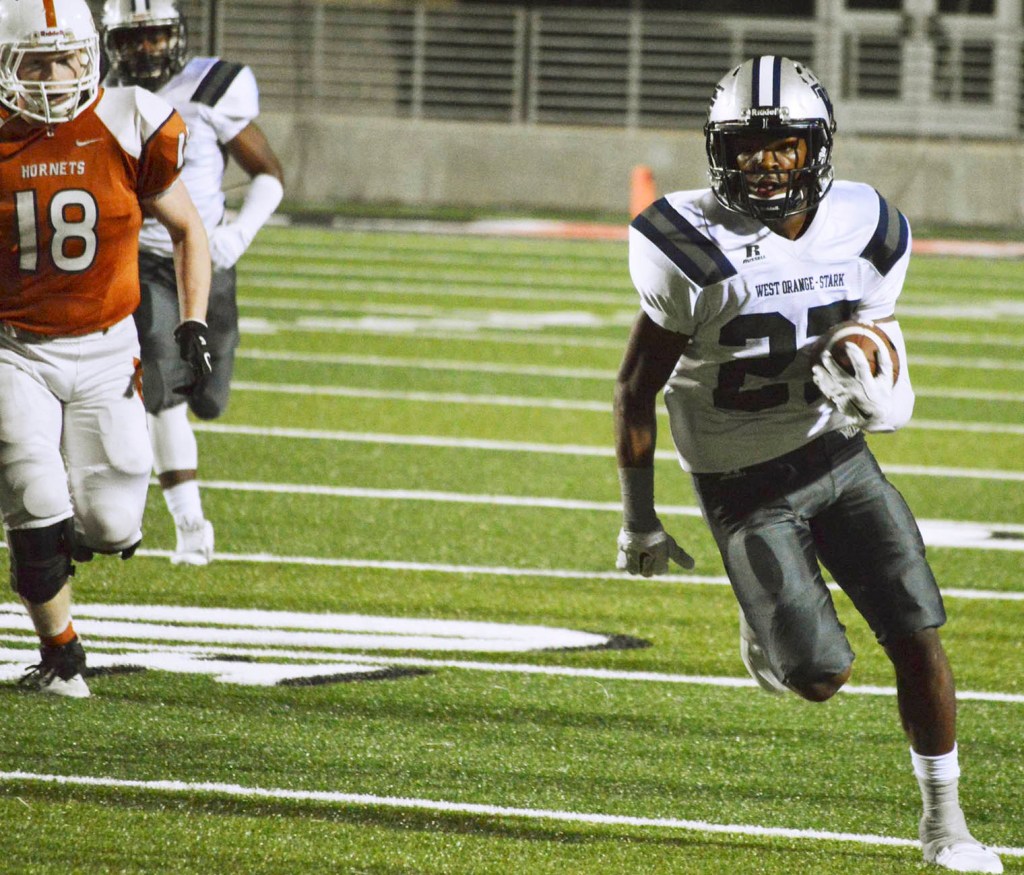 WEST ORANGE — For the fifth straight season, the West Orange-Stark Mustangs are playing some December football.

“There is nothing like playing high school football in December,” said WO-S coach Cornel Thompson, who is leading the program into its fifth straight regional final. “There are only eight teams left in the field and we’re one of them. Hopefully, if we continue to press on and play like we’ve been playing, the Mustangs will be one of four teams left after this week.”

The Mustangs certainly enjoyed their trip to Texan Drive Stadium last week when they thumped the Caldwell Hornets 69-13.

“It was a nice win and we dominated in all three phases of the game,” said Thompson. “It goes into the win column but we can’t look back now, it’s all about this week and a talented Bellville squad.”

The Brahmas have had a tremendous season as well, adding to it last week by toppling previously undefeated Giddings 37-20.

There is certainly nothing fancy about what Bellville likes to do. The Brahmas like to line up and run it right at opposing defenses.

The Brahmas, led by two-way starter in standout running back-linebacker junior Mac Briscoe, are averaging 347.3 yards a contest, 303.2 of it via the ground game.

Briscoe has piled up 1,794 yards thus far on the ground on 224 carries and has found the end zone 23 times.

“The Briscoe kid is not your proto-type fullback,” said Thompson. “He’s physical, but he also has some elusiveness to him and he hits the holes quick. He’s one of those hard-nosed football players that plays hard on defense and very seldom leaves the field.”

“They run out of the Wing-T slot, do some power stuff and like to run off-tackle,” said Thompson. “They like to run the buck sweeps and like to throw in some reverses from time to time. We’re going to have to stay on our toes with this bunch.”

Bellville’s quarterbacks do not put the ball in the air much at all or run it that often. Senior Austin Maeker and sophomore Marcus Ward have combined to complete 34-of-97 passes for 514 yards with eight touchdowns and 10 interceptions.

“Bellville does familiar things that we’ve seen all year in playing people like Vidor, LC-M, Newton, Orangefield, Liberty and Hardin-Jefferson,” said Thompson. “The only little difference is they do put the ball up in the air a little bit more and they like to catch people off guard with that.”

Bellville will face a stern test in WO-S’ Chain Gang Defense, which is allowing just 193.4 a game.

The Brahmas have outscored their opponents 415-224 on the season. They went a perfect 4-0 in 12-4A play, outscoring their opponents 127-62. Their two losses came against Stafford (40-15) and Giddings (28-26) in non-district and got some revenge with the win over Giddings last week.

“Bellville is a solid football team across the board,” said Thompson. “It doesn’t matter that they beat Hamshire by just two points and we beat Hamshire by 35. They came back and looked pretty darn good against a Giddings team that was undefeated last week. The past doesn’t matter, it’s all about this week and we’ve been putting that in the kids’ minds. There is nothing but good football teams left this time of the year.”

The Mustangs are coming off an amazing display against Caldwell in which they scored on two interception returns and a punt return while the offense piled up 465 yards, including 375 on the ground as they totally dominated the Hornets.

WO-S is piling up 395.5 yards a game going into the Regional Final.

Junior quarterback Jack Dallas has completed 167-of-255 passes for 2,453 yards with 32 TDs and just six interceptions.

The Mustangs will challenge a Bellville defense with a lot of speed and depth at all of the skill positions.

Melech Edwards leads the balanced running game with 778 yards and eight TDs on 119 carries. Jeremiah Shaw has rumbled for 746 yards and 11 TDs on 109 totes.

“Offensively, we’ve pretty versatile the last few weeks,” said Thompson. “Our running game has improved thanks to an offensive line that has shown drastic improvement. We love that we can go out and mix things up on offense and keep defenses second-guessing on a lot of things we can do.”

Linebacker Dylan Jackson leads Bellville in tackles with 105 while Jaric Crider has 66 and Briscoe 64.

The Mustangs are a team that doesn’t like to rest on their laurels. However, since WO-S fell to Class 5A power Richmond Foster in non-district, they have outscored opponents 396-37 in a eight-game winning streak. That also includes outscoring foes 169-3 in 9-4A play and 179-28 in three postseason affairs.

“I’m not going to lie, we’ve been playing good football since the second half of that Foster game,” said Thompson. “The kids have really grouped together and have went out and performed. Hopefully we can continue this little roll we’re on and win and advance. It’s such a fun time of the year and they’ve earned it by reaching this point.”

WO-S and Bellville are two of the remaining eight teams left that are battling for the 4A Division II State Championship.

Tickets will be on sale in the WOS Athletic office the following days:

Friday, December 4th from 9-12pm only

Ticket prices are $6 for Adults and $4 for students. All tickets at the gate are $8.