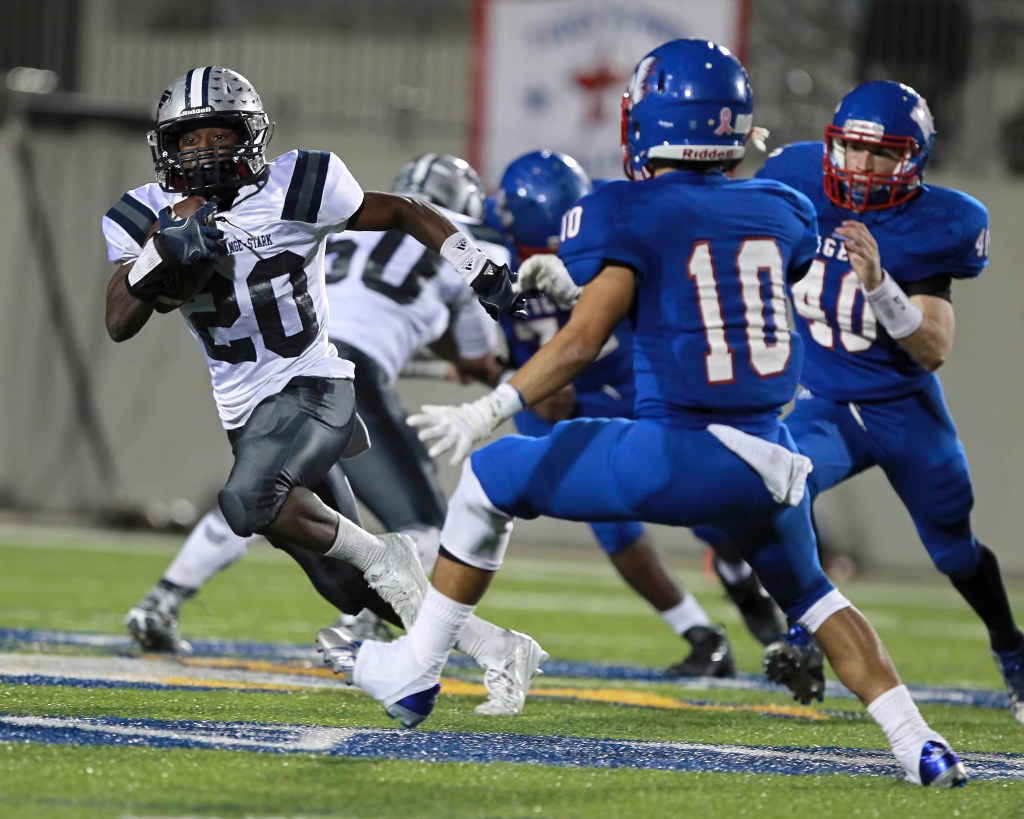 WEST ORANGE – After a total demolition of the Wharton Tigers last week in the area round, the high-flying West Orange-Stark Mustangs will look to slow down some feisty Caldwell Hornets Friday night at New Caney Porter Stadium in the Class 4A Region III Division II semifinals.

“It’s that time of the year where there are no more weak sisters,” said Mustang coach Cornel Thompson. “Each week, you look at a more formidable opponent and this Caldwell team is certainly that. They do a lot of good things, so we’re going to have to be well-prepared for a lot of things they can throw at us.”

The Mustangs were certainly in a “groove” on both sides of the ball against Wharton.

Melech Edwards leads the WO-S ground arsenal with 682 yards and seven TDs on 111 carries. Jeremiah Shaw, who scored a pair of TDs against Wharton, has 637 yards and nine TDs on 97 carries and also has 12 catches for 174 yards and two TDs. Hancock has shown some versatility with 200 yards and six TDs on 23 carries.

“We’ve had some good offensive outings this season but the Wharton game, that was really solid for us across the board,” said Thompson. “At this time of the year, you like to see that good mix of run and pass. We would love to be able to do the same this week, it’s just all about where everybody lines up and what schemes they (Caldwell) want to play against us.”

The Mustang defense, which limited Wharton to just 181 yards of total offense, will hone in on a very explosive Caldwell offense that is averaging nearly 412 yards per outing.

“Caldwell is a very offensive-minded football program and they know what they want to do and they’ve been able to go out there and do it all year,” said Thompson. “They mix things up so well and have some tremendous athletes. They mainly like to run the spread but aren’t afraid to line up in the Power-I and get after you when it’s working. They really are going to be a challenge for a defense.”

The Hornets are led by quarterback Joseph Crnkovic and tailback Keyshawn Chambers.

Chambers has zipped for 1,548 yards and 17 TDs on 182 totes.. Chambers was a All-State back last year in which he rushed for over 1,800 yards and 27 TDs and has been on that same pace this season behind a stout offensive line that has paved the way.

“The running back Chambers is one of those special kids, he made All-State last year and after watching him, he deserves those kind of accolades,” said Thompson. “Their quarterback is a specimen, going about 6-5 and 205. He looks down on everybody on the field and has tremendous vision. He has at least four receivers that are very talented including another (Domonique) Chambers that has nearly 1,000 yards receiving. We’ve got to be able to keep all their weapons in front of us and they probably feel the same about us.”

Caldwell will be facing a Mustang defense that is allowing just 186.7 yards a game for the season.

The Hornets have piled up the points all season, scoring 500 of them and have won seven of their last eight games. Caldwell was the District 11-4A runnerup with their only district loss coming at the hands of Giddings, 46-39.

The Hornets defense has definitely bended at times throughout the year in allowing 398 points, compared to a Mustang “Chain Gang” defense that has allowed just 121. Caldwell is allowing close to 300 yards a game, 176 of it on the ground.

Caldwell’s other losses include a 41-30 defeat at the hands of Bellville, which still remains alive in the postseason along with a loss to Madisonville (43-41) and Teague (60-37).

“You never really like to us the term quality loss but looking at it, Caldwell has four of them, all against playoff teams,” said Thompson. “Two of them, Bellville and Giddings, are playing each other this week and the winner of them will get either us or Caldwell. I think the kids are up for the challenge, especially if they come out and play like they did in the first half against Wharton. What we would love to see is 48 strong minutes across the board. If we do that, that would be great.”

The winner between the Mustangs and the Hornets will take on either Giddings or Bellville in the $A Division II Region III Finals next week.

**Note: If you are using a GPS, please do not put in the stadium address. Many systems are not yet updated. It is best to use the address for Porter Glass and Mirror (21262 US 59, New Caney, Texas 77357), located just at the corner of US 59 S and Valley Ranch Parkway.

From South –Take US 59 N towards New Caney and exit FM 1485. Make a U-turn at FM 1485 and continue on the service road of US 59 S for approximately 1 ¼ miles. Turn right onto Valley Ranch Parkway to enter the stadium.

From North – Take US 59 S towards New Caney and exit FM 1485. Continue on the service road of US 59 S for approximately 1 ¼ miles. Turn right onto Valley Ranch Parkway to enter the stadium.