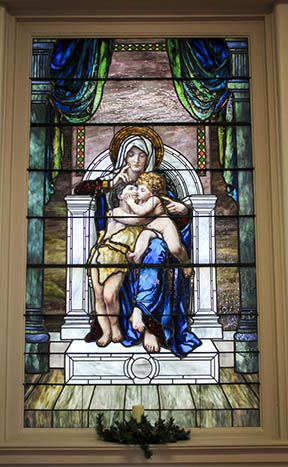 ORANGE — In search of a more central location, a historic church will serve as host for 59th annual Toy Coffee fundraising event.

The church was first organized in 1878 as a “Lutcher Memorial.”  It was one of the earliest air-conditioned buildings in the United States.  The three windows in the upper foyer (sanctuary level) were prize-winning works of art from the Chicago World Fair in 1853. The windows are made of opalescent stained glass, not Tiffany, similar to opals, with metallic oxide, giving the glimmering effect, which intensifies according to the lighting and time of day. This is why the windows are referred to as “living art”.

The church has an elevator to help assist those unable to climb the stairs to see the displays in the sanctuary on the second floor.

A Chrisom tree in the sanctuary is decorated with white and gold showing off the ancient designs while reminding one of the purpose of Jesus, His life, teaching and ministry.

While other denominations also have a Chrisom Tree, the tree had its beginnings on 1957 in the Lutheran Church of Ascension in Danville, Virginia.

According to the church, the Chrisom Tree is displayed during Advent, the four Sundays before Christmas, until the Feat of Epiphany on January 6.

The tree hosts five symbols: a fish, a butterfly, a dove, a shell, and the Jerusalem Cross.

Admission to the annual event is for guests to bring a new, unwrapped toy or a monetary donation. The toys and monetary donations are provided to the Salvation Army of Orange County, which, in turn, uses these toys to help fill the Christmas wishes of hundreds of children across the area. The Toy Coffee charity event has helped supply more than 2,800 toys and approximately $24,000 in donations in the past six years.