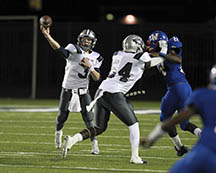 By Van Wade
The Orange Leader
CHANNELVIEW – Kicking the Wharton Tigers directly in the mouth from the opening snap, the West Orange-Stark Mustangs cruised to a decisive 47-15 victory in the Class 4A Region III Division II area round playoffs at Maddry Stadium at Channelview High School Friday night.

The Mustangs (11-1) dominated right out of the chute, sprinting out to a 40-2 halftime lead as they dominated the Tigers (8-4) throughout the first 24 minutes.

Mustang quarterback Jack Dallas threw for four first-half touchdowns as the Mustangs piled up 346 yards in the half while limiting the Tigers to just 84 yards. The Mustang defense picked off Tiger quarterback Jimmie Woods three times in the half, two coming from Jarron Morris and they sacked Woods five times.

The Mustangs will face Caldwell in the Region III semifinals next week. Caldwell toppled La Marque 42-39 in a nailbiter Friday night.

“We felt like we had a good game plan coming in and the kids responded big-time to start the game on both sides of the ball,” said Mustang coach Cornel Thompson. “We felt like we could utilize our speed with our short passing game and got some huge plays tonight. We mixed things up well and had them guessing.”

The pressure on Woods paved the way for the WO-S defense.

“We just didn’t want to give him time because they have a lot of speed in their receivers, just like we do,” said Thompson. “We threw a bunch of inside stunts on them and they could never figure it out. This was a big win for us. It doesn’t get any easier next week.”

The Mustangs finished with 468 total yards. The Tigers finished with 181 yards as Woods threw two TD passes in the second half late. Woods finished 11-of-22 for 89 yards. Tiger back BJ Baylor managed 98 yards on 14 carries.

The Mustangs put together a beautiful drive on the first series of the night as they marched 62 yards in nine plays to find the end zone.

Dallas completed 4-of-5 passes for 41 yards. Keion Hancock, running out of the “Wildcat Quarterback”, had two carries for 21 yards, including a 14-yard touchdown run in which he ran to the right and darted back across the middle for the score.

Dallas connected with receiver Aric Cormier on the two-point conversion as WO-S led 8-0 with 9:02 in the first quarter.

After holding the Tigers to a quick three-and-out, the Mustangs scored again quickly in going 51 yards in just four plays.

Dallas teamed up with back Jeremiah Shaw on a screen pass that netted 26 yards to the Tiger 25. Three plays later, Dallas would find receiver Thomas Wallace in the middle of the end zone for a 13-yard touchdown strike in which Wallace made a nice leaping catch in front of a Wharton defensive back, pushing the lead to 14-0 with 5:57 in the first.

After Mustang defensive back Jarron Morris picked off a Woods’ pass at the Mustang 4, the Tigers were able to get on the board when they sacked Dallas for a safety in the end zone.

The Mustangs rebounded nicely by scoring the next time they had the leather. Jeremiah Shaw capped a six-play, 62-yard drive when he scooted off left tackle and down the sidelines for a 38-yard touchdown romp. Dallas ran in the two-point conversion to make it 22-2 with 11:27 remaining in the first half.

The Mustangs chewed up 5:07 off the clock with a 13-play, 86-yard scoring drive. Dallas passed for 50 yards on the series, including a quick pass to the right which receiver KJ Miller took “to the house” from 21 yards out to push the WO-S advantage to 28-2 with 3:47 in the half.

Mustang linebacker Justin Brown picked off a Woods’ pass at the Mustang 6 and returned it to the Mustang 49 with 2:07 in the half. On the next snap, Dallas teamed up with Hancock on a swing pass to the left and Hancock zipped and darted through the Tiger defense for a 51-yard touchdown pass, pushing the big cushion to 34-2 with 1:54 in the half.

Mustang Morris picked off Woods for a second time, hauling in an interception at the WO-S 46 and returning it all the way to the Tiger 23 with 1:04 in the half.

Two plays later Dallas hit Wallace over the middle and Wallace turned it upfield for a 15-yard touchdown catch and a 40-2 WO-S lead with 0:32 in the half.

Dallas completed 14-of-18 passes for 204 yards to seven different receivers in the half and a balanced Mustang running game picked up 142 yards on 18 carries.

Baylor sparked the Wharton offense with 10 first-half totes that went for 63 yards.

The Mustangs capped off a 71-yard touchdown drive early in the fourth quarter when Shaw bolted through the Tiger defense for a 18-yard touchdown gallop to make it 47-2 with 10:33 remaining.

The Tigers took advantage of a muffed punt by the Mustangs and took over at the WO-S 18. Three plays later Woods found receiver Robert McGrew on a 19-yard touchdown pass in the left corner of the end zone to trim it to 47-8 with 8:03 left.

The Tigers were able to hit paydirt again with 2:48 remaining when Woods connected with Markese Holmes on a 13-yard touchdown strike in the back of the end zone.

“I think we lost some focus there in the second half and had some silly penalties and gave up a few big plays in the passing game,” said Thompson. “We can’t afford that kind of stuff down the road. The kids are going to get some rest Saturday and will hit the practice field running Monday morning. Hopefully we’ll get after it against Caldwell and keep continuing down the road and where we want to go.”