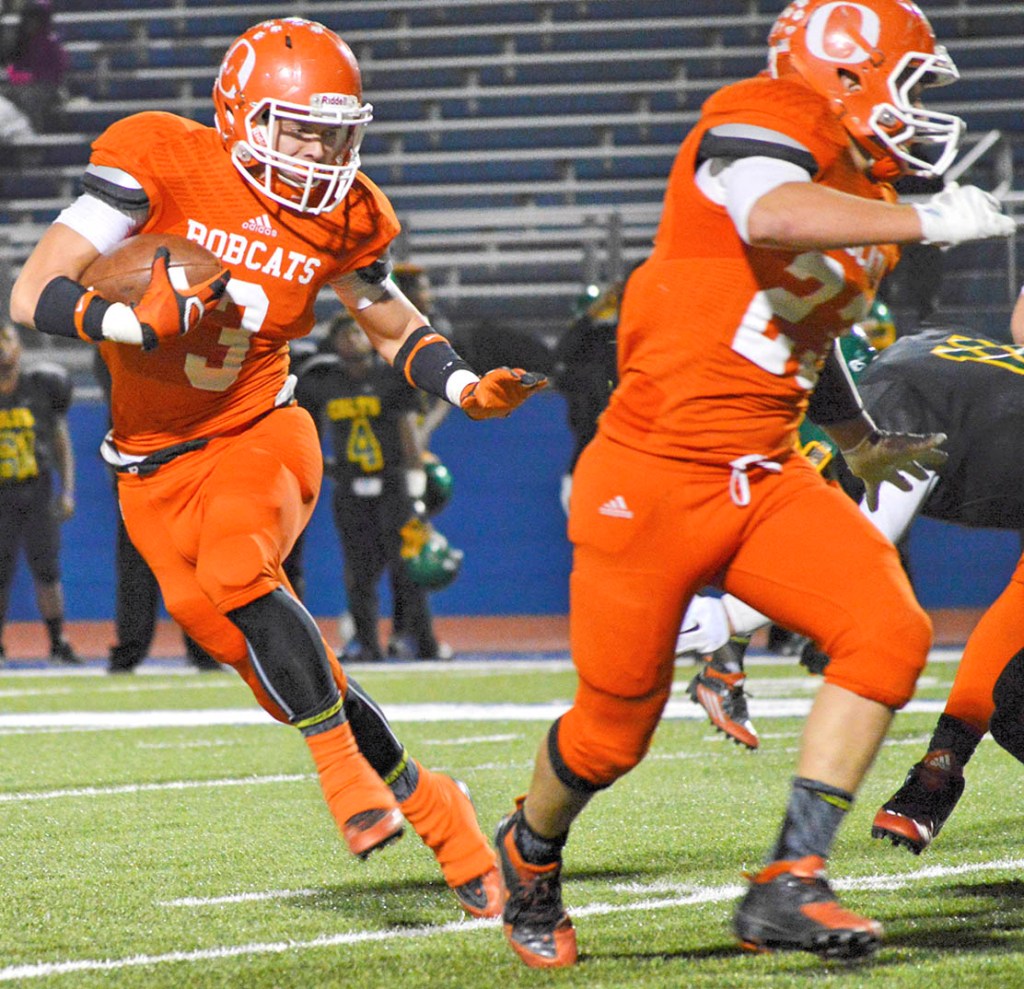 It marks the second straight bidistrict playoff win for the Bobcats, who beat Houston Kashmere in the same round a year ago.

Orangefield will now move on to face either Giddings (10-0) or Sweeny (2-8) in the arera round next week.

The win can be attributed to a defense that stood its ground and never backed down. Brandon Bray led the Bobcat defense with two sacks and eight tackles including a sack on the final play of the game to seal the victory.

“Bray is one of our leaders on defense,” Bobcat head coach Josh Smalley said. “He just loves the game and works hard, he really helped apply pressure on the quarterback all night.”

The Bobcats received the opening kickoff and set the pace early. The drive started at the Colts and the Cats’ drained six minutes off the clock while driving the distance for an early touchdown. Christoper McGee capped the drive with a six-yard touchdown run off the right side tackle for an early 7-0 lead.

The Colts received great field position on their opening drive after a short kick-off by the Cats’. The drive was short-lived with Zach Dischler intercepting Colt quarterback, Alfred Robertson on the third play of the drive. The Bobcat offense went right back to work at the 41 yard line. Austin Moore ripped off a 30 yard run before being shoved out of bounds. Three plays later Christoper McGee notched his second touchdown on a two yard dive to extend the Bobcat lead to 13-0. McGee rolled to 112 yards on 17 carries and added one reception for 10 yards.

Worthing, however, kept hanging around and Robertson worked another short field from the 48 yard line. It took just over a minute for the Colts to chip in a score with Robertson following his blockers into the end-zone from six yards out to pull within a score, 13-6 at the end of the first quarter.

Orangefield’s offense continued to keep the and drove 54 yards on the ensuing possession. Following a scare in which Bobcat quarterback Matthew Watkins went down with an undisclosed leg injury, Hunter Evans slipped in for a five yard touchdown run. Watkins later returned to action with a knee brace and will have test done Friday to determine the extent of the injury.

After starting the game, 0-for-3 passing, Alfred Robertson finally got the Colt passing game going. Johntiz Robertson slipped past Bobcat defenders to snag an 84 yard touchdown pass from Alfred Robertson to pull the score to19-13. Alfred Robertson led the Colts with 239 yards of total offense (164 passing, 75 rushing) and was responsible for all four scores.

The Cats’ attempted to notch another score right before the half, but fumbled twice within the Colt 10 yard line. Blake Bradley would lose the second fumble at the two yard line, but the defense held the Colts to save any further damage to hold onto the lead heading into halftime.

The Bobcats gave the Colts great field position to open the second half. Alfred Roberton took just 30 seconds before he’d launch a 54 yard touchdown run leaving behind all Bobcat defenders to give Worthing their first lead of the game, 21-19.

The Bobcats’ fell victim to an onside kick giving the Colts possession in their own territory. The first play of the drive, Alfred Robertson sailed a 44 yard pass over the Bobcat safety for a touchdown to Johntiz Robertson for their second hook-up of the game. Johntiz had five receptions for 132 yards on the night. Not even a minute into the second half, Worthing would lead28-19, putting the Bobcats in a very tough spot.

Orangefield battled right back and Watkins showed grit, returning to the game to lead his team. After running close to five minutes off the clock, Austin Moore powered his way for a four yard touchdown run to pull within two points, 28-26. Moore led all rushers on the night with 122 yards on 20 totes.

The Cats’ defense started to get pressure on Alfred Robertson on the next Colt possession. They’d force three consecutive incomplete passes to force a turnover on downs. Unfortunately, they’d turn the ball over yet again after Christopher McGee fumbled at the Bobcat 21 yard line, but the defense stepped up and never looked defeated. They stopped Worthing at their own 15 yard line to force yet another big turnover-on-downs.

The Bobcats’ drove the field with Watkins capping the 85 yard drive with a one yard dive to lead, 34-28 with 6:06 remaining in the game. They’d have a little trickery of their own as they slipped in an onside kick and recovered the ball close to midfield. After running the clock to 11 seconds left in the game, Matthew Rainey secured the win with a 20 yard field goal.