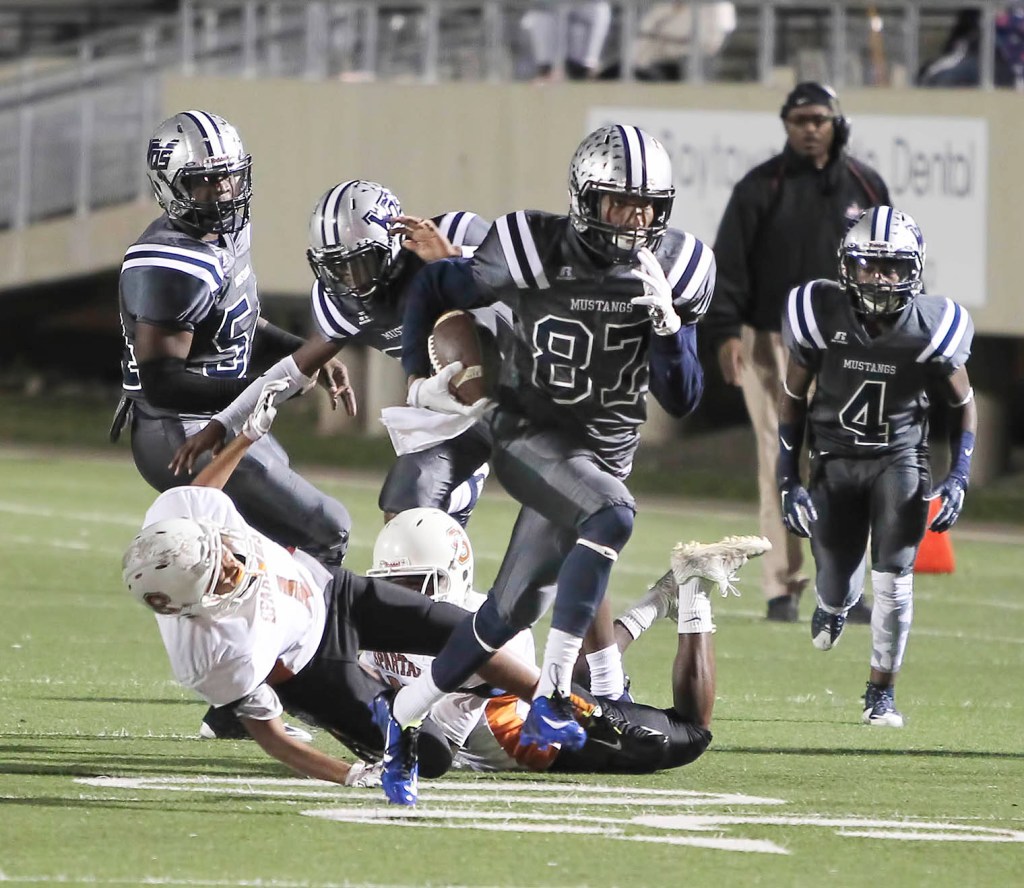 BAYTOWN – It was another breeze for the West Orange-Stark Mustangs for
the second year in a row in Class 4A Region III Division II bidistrict
play against the woeful Houston Scarborough Spartans.
WO-S (10-1) piled up 462 yards of total offense despite a running
clock while the “Chain Gang” defense held the Spartans (1-10) to minus
44 yards and did not give up a single first down in a 63-0 blowout win
at Baytown’s Stallworth Stadium.
The Mustangs saw nine different players find the end zone as they
shared the wealth.
“I hate playing a game like this for the second year in a row,” said
Mustang coach Cornel Thompson. “The kids came out and played focus.
Everyone got in on the action. We just did not want to get anyone
banged up in a game like this. It gets a little more interesting next
week, you can count on it.”
The Mustangs will now move on to face either La Grange or Wharton in
the area round next week.  The game will be played at Channelview High
School at 7 p.m. The Mustangs defeated LaGrange 42-7 in the regional
finals last season on their way to the 4A Division II State Finals.
“We’re going to have to go back to work and figure out how we can
control one of those two good football teams,” said Thompson. “La
Grange can move the ball on the ground well. Wharton likes to run the
spread, and they run it well. We’ll see who we got and go from there.
It’s that time of year where you win or go home and from this point
on, you always have to bring your ‘A’ game.”
The Mustangs piled up 183 yards in the first quarter on just six plays
as they darted out to a 33-0 advantage.
WO-S finished with 353 yards on 17 plays  in the first half to lead
47-0 at intermission while holding Scarborough to minus 31 yards.
Seven different Mustangs scored touchdowns in the first half.
After holding the Spartans to minus nine yards on their first series
the Mustangs scored on their first offensive when Dallas swung a pass
out to receiver Thomas Wallace, who sprinted 38 yards untouched for
the score as WO-S led 7-0 with 9:58 remaining in the first quarter.
On the ensuing Spartans’ series the snap went over quarterback Jared
Holley’s head. Several Mustangs touched the ball but couldn’t get
their hands on it until defensive back Aric Cormier finally scooped it
up and scored from the Scarborough 6 to push the lead to 14-0 with
9:30 in the first.
After another three-and-out by the Spartans, it took the Mustangs just
two plays and 46 yards to find paydirt again with Keion Hancock
finishing it with a 39-yard touchdown gallop around the left end to
push it to 20-0 with 5:20 still in the first.
After another Spartans’ three-and-out the Mustangs found the end zone
on the first play again when Dallas tossed a swing pass to the right
and KJ Miller cruised through the Scarborough secondary on his way to
a 59-yard score, making it 27-0 with 3:15 in the first.
Dallas completed both his passes for the night for 97 yards and a pair
of scores.
It took just two plays to navigate 40 yards on their next drive.
Jeremiah Shaw carried both times, including a 38-yard touchdown romp
up the middle to push it to 33-0 with 1:10 in the first.
The Mustangs found the end zone early in the second quarter, going 63
yards in just two plays. Payton Robertson connected with Cormier on a
26-yard pass and tailback Melech Edwards wrapped it up with a 37-yard
touchdown dart over the left side, making it 40-0 with 10:48 left in
the half.
WO-S marched 62 yards in five plays the next time they had it.
Robertson went 32 yards on a keeper to the Spartan 5 and Ja’Vonn Ross
capped it with a five-yard touchdown run to make it 47-0 with 5:40 in
the half.
With the clock running the entire second half, Mustang back Jamarcus
Joulevette scored from 12 yards out with 6:48 left in the third to
make it 54-0.
After the Spartans fumbled at their own 5 the Mustangs played nice by
not running a play and settled for a Ryan Baham-Heisser 22 yard field
goal to up it to 57-0.
Mustang back Quinton Chargois, who had 107 yards on just five totes,
took it to the “house” on a 61-yard touchdown early in the fourth
quarter to make it 63-0.