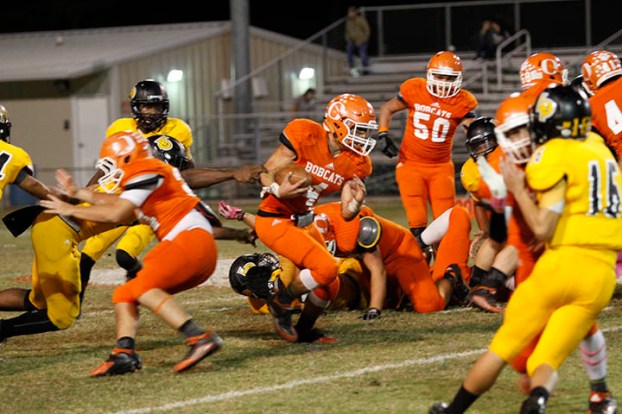 By Tom Halliburton
Sports Correspondent
ORANGEFIELD – Brandon Bray expressed his gratitude for Matthew in Orangefield’s team huddle around 10:30 Friday night and voiced his love for all his teammates.
Orangefield owned three special senior Bobcats named Matthew for which to thank after the 24-21 overtime victory over Liberty at F.L. McClain Stadium.
Matthew Rainey booted a game-winning 25-yard field goal at the end of Orangefield’s lone overtime offensive series. Quarterback Matthew Watkins ran for two scores, threw for a third and gave the Cats a solid supply of leadership all night. Matthew Brown gallantly played a terrific game at linebacker before departing late in the third quarter with a very serious looking knee injury.
After Bray and the Orangefield faithful offered thanks, the Bobcats (5-4 and 2-1) rejoiced in clinching their third consecutive post-season berth under fourth-year head coach Josh Smalley.
Liberty head coach Chad Taylor and Smalley both received a bit of big-time NFL experience at icing the kicker before the left-footed toe of Rainey settled the outcome.
Watkins delivered the only double-digit gainer for either side in overtime, dashing 11 yards on a keeper to Liberty’s 14 to begin the Cats’ possession. Taylor called time before Rainey booted the game-winner from the right hash.
Bobcats junior defenders Zach Norman and Blayze Holley stopped Liberty’s Tino Briggs for no gain on 4th and 3 to halt the Panthers’ overtime possession at the Cats 18.
“It’s quite an experience,” Bray said, reflecting on the excitement of Orangefield’s overtime finish. “It’s not every day when you come into an overtime like that.”
The Bobcats truly dodged the bullet when Liberty kicker Trevor Pierce barely missed a 35-yard field goal to the left of the upright with plenty of distance. It was Pierce’s second of two kicks and the senior kicker badly missed the first try but it was nullified because Smalley called time-out.
“I looked at our coaches and said ‘That’s just my luck’,” Smalley said. “But we just happened to make the field goal at the end. We were fortunate to get out of there with a win.”
Watkins (25 for 110) and Austin Moore (14 for 51) were two of eight Orangefield ball carriers on this night. The Cats seemed in control at half, leading 14-7, but the Panthers had other ideas, and changed quarterbacks after the bands played.
Rather than sticking with lanky senior Tino Briggs at quarterback, Liberty shifted Briggs to wingback and placed freshman southpaw J.J. Slack as its man under center.
Liberty won the third quarter, 14-0, to take a brief 21-14 lead. The Panthers led in rushing (271-247) and passing (75-4) yardage. But Orangefield’s mentor preached all week that the night would boil down to turnovers and the Bobcats owned that category, 2-0.
The Cats marched 64 yards in 15 snaps to tie the game at 21-21 with 9:03 to play. Watkins looked to throw on 3rd and 6 at Liberty’s 20. The senior quarterback saw a crease, broke two tackles and ran to the Orangefield sideline for 16 to the Panthers 4. Watkins sneaked behind big senior Jake Bradley for the final yard.
Orangefield gets an open date next week before it closes the regular season on Nov. 5 at Hamshire-Fannett.