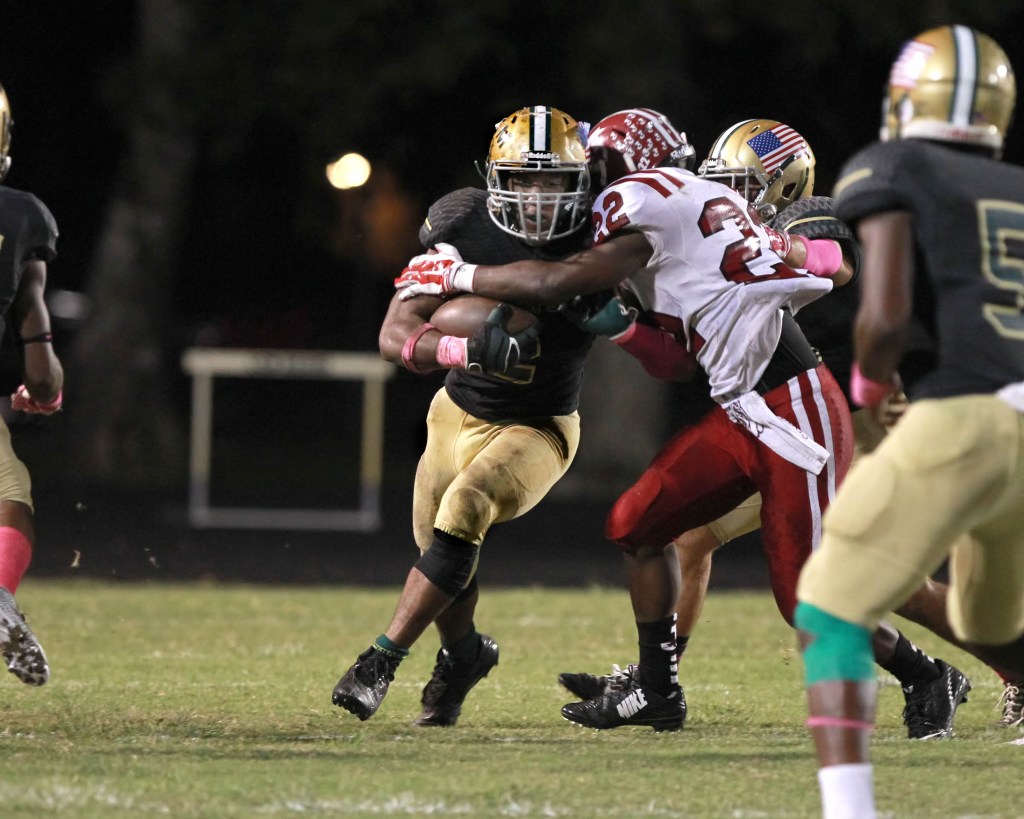 Holmes tore through the LC-M defense for 244 yards and three touchdowns on 27 carries as the Bulldogs (5-3, 4-0) remained unscathed in district as they look to repeat as district champions.

The Bears (3-6, 2-3) received another strong effort from tailback Sam King. King romped for 162 yards and a touchdown on 19 carries and will just need 22 yards in the final regular season game at Huffman Nov. 6 to reach the 1,000-yard mark.

Two costly turnovers and a fake punt that failed by the Bears enabled the Bulldogs to take a 21-0 lead at intermission.

Jasper quarterback Tiger Williams was contained well by the Bear defense, but Holmes was simply too much.

Williams had 51 yards on the ground on nine carries and completed just 4-of-9 passes for 42 yards.

LC-M fullback J’Lon Douglas had 54 yards on 15 tough carries. Quarterback Paul Joubert completed 2-of-8 passes for 53 yards and rushed for 30 yards on four totes.
The Bears pulled to within 21-7 midway through the third quarter, going 80 yards in eight plays. The big play came on third-and-18 from their own 30 when King made some nice moves along the left side and raced down the sideline 65 yards to the Bulldog 5.
Two plays later King bolted off left tackle for a five-yard touchdown run, trimming the deficit to 14 with 5:28 left in the third.
Jasper went up 28-7 after zipping 51 yards in just six plays. Holmes caried five times for 51 yards, including a 25-yard touchdown burst over the middle to push Jasper up 27-7 with 3:12 in the third.
The Bulldogs found paydirt again early in the fourth quarter by zipping 73 yards in four plays. Holmes broke away for a 57-yard jaunt down the right sideline to the Bear 10 and scored two plays later on a nine-yard blast off right tackle to put the Bulldogs up 34-7 with 9:42 remaining.
The Bears put together a eight-play, 52-yard scoring drive late in the fourthKing had two carries for 25 yards and fullback Kayne Williams finished it off with a 10-yard touchdown blast up the middle with 1:44 left.
Jasper took advantage of a Bear miscue to go up 21-0 right before the end of the first half.
Bear quarterback Paul Joubert got hit hard and fumbled the ball away to Bulldog Devonta Armstrong at the Bear 31 with 2:27 left in the half.
Williams ran it to the Bear 26 and a 13-yard penalty was handed to the Bears as the Bulldogs were able to set up at the LC-M 13. Two plays later Holmes bolted off right tackle for a eight-yard touchdown blast to push Jasper up 21-0 with 1:27 in the half.
The Bears threatened late. Joubert connected with Isaiah Reagins on a 15-yard pass to the Bulldog 39. With 0:04 left, Joubert threw it up in a crowd near the right side of the end zone. King was able to haul it in but was stopped at the Bulldog 1 as time expired.
After a fake punt attempt failed for the Bears, the Bulldogs took over at the LC-M 49 with 8:51 remaining in the first half.
Jasper promptly put together a eight-play scoring drive to go up 14-0.
Holmes carries twice for 19 yards. Williams toted it four times for 26 yards, including a 15-yard dart to the Bear 1 and he capped it with a one-yard touchdown plunge with 5:32 left in the half.
Jasper got on the board with a six-play, 48-yard scoring drive early in the second quarter. Holmes carried four times for 27 yards on the march and Williams capped it when he hit receiver Cody Mitchell over the top for for a 21-yard touchdown toss. Kicker Rafael Mijares nailed the point-after to give the Bulldogs the 7-0 edge with 10:42 left in the half.
LC-M took the first series of the game and marched 33 yards to the Bulldog 34 but a bad handoff exchange allowed Jasper’s Brock Yates to fall on the loose ball as Jasper took over at the Jasper 32 with 7:39 in the first quarter.
The Bulldogs moved from their own 32 all the way to the Bear 27 but Williams was picked off by Chris Winters in the end zone on a third-and-13 play with 2:41 left in the first quarter.
LC-M actually outgained the Bulldogs 152-151 in the first half.
King had 37 yards on nine carries. Winters had 36 yards on six totes and Douglas had 29 yards on eight carries. Joubert completed 2-of-3 passes for 53 yards.
Holmes had 80 yards on 10 carries in the first 24 minutes for the Bulldogs. Williams had 34 yards on six totes and completed 3-of-7 passes for 32 yards with Mitchell hauling in two for 32 yards.