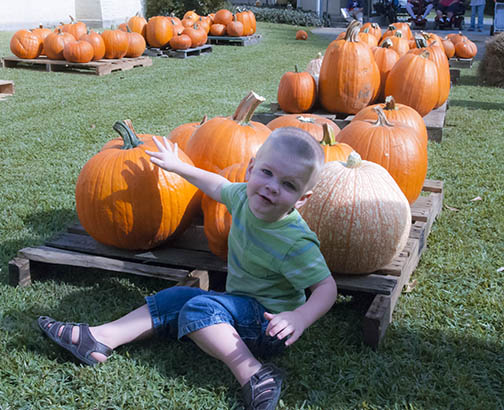 ORANGE — A visit with family in Tyler sparked an idea for something new at Cove Baptist Church, 1005 Dupont Drive in Orange.

“I was visiting cousins in Tyler,” Judy Toney said on Saturday as volunteers gathered in anticipation of the pumpkin delivery. “They do a pumpkin patch there.”

Toney said the church has held other events such as participate in a gumbo cook-off, craft sales and even a block party.

“The only other Pumpkin Patch is at Winfree Baptist Church on Hwy. 62,” Toney said. “We are hoping to connect more with the community.”

The pumpkins are grown on a Navajo Reservation in New Mexico.

“These are the largest on average pumpkins I have seen in the seven years I have been doing this,” Weldon Cypert of Perrin, Texas said.

Cypert has helped delivery pumpkins for Pumpkin Patch for the last seven of eight years.

“I really enjoy doing this,” Cypert said. “It is fulfilling. I am hoping to do maybe one more load this season. There are great stories at each stop.”

Luke Hood, 4, was excited about people seeing the pumpkins.

“They are good for a lot of things,” Hood said.

Pastor Travis Hood has been with the church approximately two years.

“Typically we held a Fall Festival which is one day with games,” Hood said. “This allows us to stretch it out over two weeks and gives us an opportunity for better interaction with the community.”

The event will have a variety of baked goods for sale during the duration of the pumpkin patch as well as story time for children, children’s activities on Saturdays, and photographs taken of families or children with the pumpkins for sale.