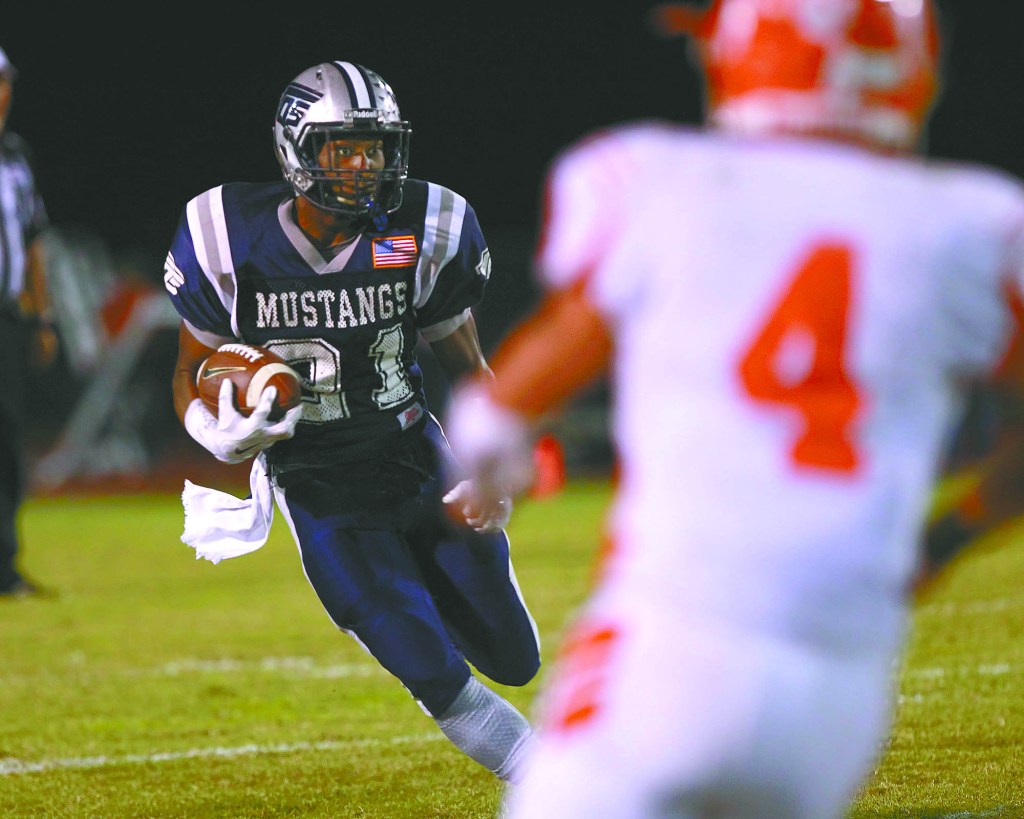 WEST ORANGE — The “Chain Gang Defense” of West Orange-Stark was simply too much to overcome for the Orangefield Bobcats Friday night.

The Mustangs managed 369 yards and held the Bobcats to 177 as WO-S picked up a 37-3 District 9-4A Division II victory at Hooks Stadium.

“The kids made the right adjustments to come out and fight a very well coached team,” Mustang head coach Cornel Thompson said, “You always worry about outside distractions on homecoming night, but these kids remained professional.”

The Bobcats (4-4, 1-1) received the opening kickoff and marched the ball down to the Mustangs 18 yard line with Matthew Rainey chipping in a 29 yard field-goal. The Bobcats chewed up just over seven minutes off the clock to grab a 7-0 lead.

The Mustangs (7-1, 2-0) finished a nice drive in the second quarter that was capped off by a Justin Brown two-yard touchdown run. Dallas ran in the two-point conversion as the Mustangs held the lead the rest of the way.

The Bobcats had played mistake free football throughout most of the half until Blake Bradley fumbled at their own 37 giving the Mustangs excellent field position with 6:27 remaining in the first half.

It was the Bobcats’ defense that stepped up and forced the Stangs’ to a three-and-out. Tristan McGee broke up a would-be 40 yard touchdown pass by Jackson Dallas to save the Bobcats.

After a stalled Orangefield drive WO-S went to work with five minutes left in the half. The usual high powered Mustang offense came alive and aired out the ball working over the Bobcat secondary. Dallas completed four of eight passes with a long of 22. He finished off the 80 yard drive with an 11 yard touchdown pass to Thomas Wallace to extend the Mustang lead to 16-3 at the half.   Wallace finished the game with four receptions for 67 yards and a touchdown.

The Bobcats’ opened the second half with some trickery and attempted an onside kick that bounced in their favor. They’d recover and start their drive at the 50, but four plays later would come up inches short to keep the drive alive.

The Mustangs took over at their own 37 and looked like the team the crowd expected. Dallas began zipping passes to Wallace and company, driving the distance while hitting Kentavious Miller for a 11 yard touchdown pass to put the game out of reach, 24-3 with 6:32 remaining in the third.

WO-S kept the ball moving against the Cats’. Following a Dallas to Dominic Tezeno 22 yard pass, Payton Robertson scored on a 10-yard screen pass with 1:59 remaining in the third to bury the Bobcats even further, 31-3.

Blayze Holley led the Bobcat ground game with 58 yards on eight carries. Matthew Watkins had 42 yards on 10 totes while Austin Moore had 37 yards on 14 carries.

The scoreboard read 37-3 at the start of the fourth and both squads surrendered their starters to make way for the young blood of the team to get some reps. Both teams second string showed promise making big plays throughout the final quarter. Mason Gonzales showed some promise with runs of 16 and 12 yards for the Bobcats and Payton Robertson stepped under center for the Mustangs completing both his passes.

The Mustangs will build on the momentum from their big homecoming win to go on the road to take on Kendrick King and the Longhorns of Hamshire-Fannett. The Bobcats will pick up the pieces and return home to face Liberty, which is coming off a bye week.