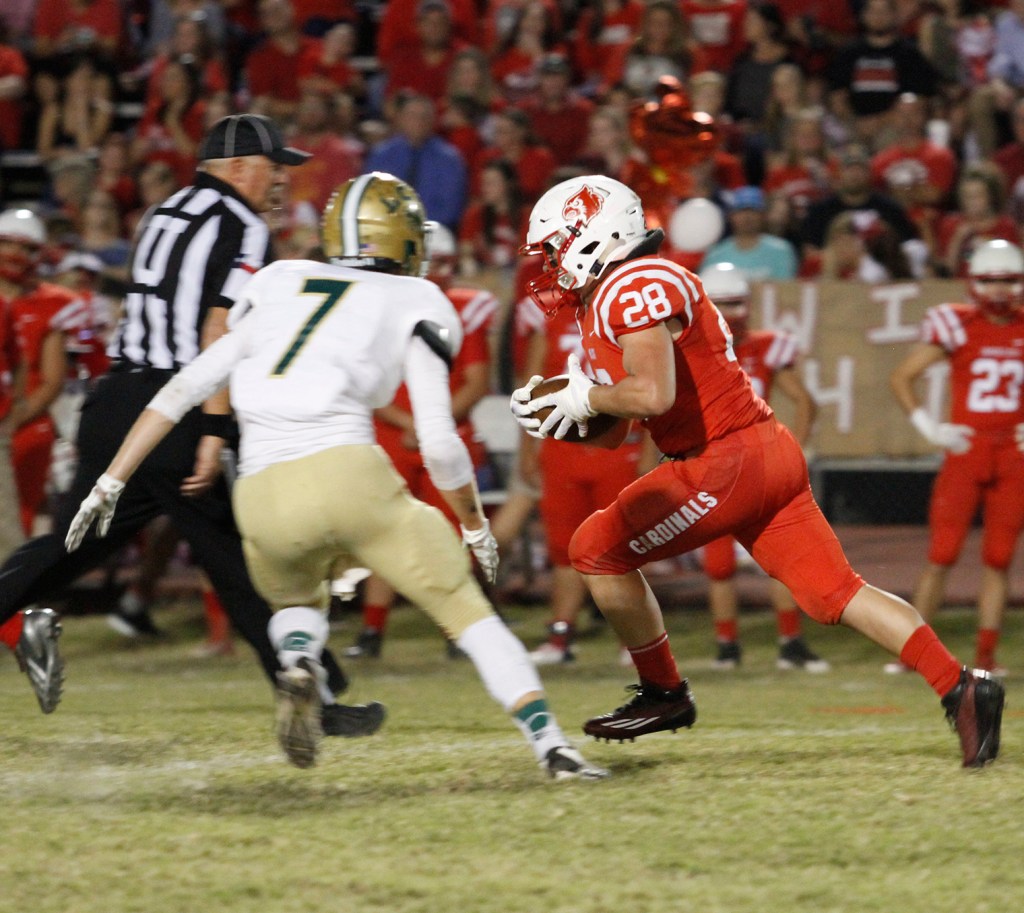 BRIDGE CITY – Coming out with some fierce fire in their eyes, the Bridge City Cardinals used their normal power running game but it was their passing game that paid high dividends as well against Little Cypress-Mauriceville Friday night.
Cardinal quarterback Camden Dubois threw two first-half touchdown passes and Bridge City took advantage of three LC-M turnovers as Bridge City opened it up with a 42-7 lead and the Cardinals went on to run away with a big 62-35 District 10-4A Division I Homecoming victory.
The Cardinals (5-2, 2-1) piled up 312 yards in the first 24 minutes while limiting the Bears (3-5, 2-2) to 127 yards.

Bridge City finished with 474 total yards while the Bears had 340 yards, all of it on the ground. However, LC-M ended up with five turnovers.
Dubois was a perfect 4-for-4 for 122 yards and the two TD tosses and he ran for a 23-yard score and a seven-yard score in the first quarter. He finished 5-for-5 for 138 yards and had 69 yards on 12 carries, adding another scoring run in the second half.
Cardinal back Cayce Draper had five carries for 83 yards in the half and caught two big passes for 47 yards. He finished with 127 yards on 11 carries and three catches for 63 yards.

The Cardinal win offset an amazing performance by LC-M tailback Sam King. King rumbled through the Cardinal defense for 226 yards on just 11 carries and scored all five of the Bear touchdowns. Fullback J’Lon Douglas added 97 yards on 13 totes.
Both teams struck quickly to open the game.
The Cardinals wasted no time jumping on the board.
Cardinal Colt Poole pounced on a fumble by LC-M’s David Webb on the Bear 23 on the opening kickoff. On the next play, Dubois kept it around the right side and sprinted to the end zone for a 23-yard touchdown run. Brogan Brown booted the extra-point as the Cardinals led 7-0 with 11:47 in the first quarter.
The Bears answered nicely though when King, who had 100 yards on seven carries in the first half, bolted around to the right and hit the sideline for a 61-yard jaunt to the end zone. Tyler Brown nailed the extra-point, tying it up at 7-7 with 11:01 in the first quarter.
The Cardinals countered with a seven-play, 55-yard scoring march. The big play came when Dubois hit back Draper on a short pass and Draper went 30 yards all the way to the Bear 25. Five plays later Dubois did the honors again, cutting off left tackle for a seven-yard touchdown run to push the Cardinals up 14-7 with 7:53 in the first quarter.
Draper got in on the act again with 5:37 still in the first when he broke loose straight up the middle and outran the Bear secondary 67 yards for a touchdown to make it 21-7.
The Cardinals continued to open it up with their passing game.
Bridge City, facing a fourth-and-3 from the Bear 49, saw fullback Derick Dearing break loose on a 11-yard run to the Bear 38. On the next play, Dubois hit a wide-open Patrick Morrris down the left side for a 38-yard scoring toss with 11:35 to up the margin to 28-7.
Bear tailback Chris Winters fumbled the ball over to Cardinal linebacker Dearing at the LC-M 37 and on the next play Dubois teamed up with Austin Fitts, who was wide open along the right side, for a 37-yard touchdown strike to make it 35-7 with 10:06 in the half.
LC-M’s Douglas fumbled the ensuing kickoff as the Cardinals took over at the Bear 40. Draper hauled in a 17-yard pass from Dubois that eventually got to the Bear 11 and back Colt Poole capped off the seven-play drive with a 10-yart touchdown scoot with 6:35 in the half to push it to 42-7.
The Bears gained their composure late in the half, navigating a 12-play, 52-yard scoring drive. Douglas had a big 13-yard scamper to the Cardinal 9 and King finished it three plays later on a 10-yard touchdown run off left tackle to trim it to 42-14 with 0:45 in the half.
Bridge City opened the second half with a 11-play, 70-yard scoring march.
Dubois had a nice 30-yard run to the Bear 40 to get it going. He eventually found Draper on a 16-yard pass to the Bear 1 on a third-and-14 play and he capped it with a one-yard keeper for the score to push the lead to 49-14 with 6:51 in the third.
LC-M put together a four-play, 71-yard scoring drive late in the third.
Douglas got loose on a superb 45-yard cutback run to the Cardinal 16 and King bolted into the end zone for his third score of the night from 16 yards out to trim it to 49-21 with 2:22 in the third.
The Cardinals were able to put together a nine-play, 49-yard scoring drive, all on the ground and Jacob Trahan capped it with a one-yard TD plunge to make it 56-21 with 10:22 remaining.
King punched in his fourth touchdown of the night when he broke two Cardinal tackles and darted 35 yards for the score to get the Bears to within 56-28 with 9:55 left.
King wrapped up his tremendous night, breaking loose for his fifth score, going for 65-yard romp to the end zone with 2:57 left.
Poole made it 62-35 when he caught a bad LC-M onside kick, snared it on a nice hop and returned it 45 yards for the touchdown with 2:53
left.
The Bears will return home to take on Jasper next week while the
Cardinals take a nice road trip to Huffman.