Texas ranked second in U.S. for relocation activity and out-of-state migration in 2014 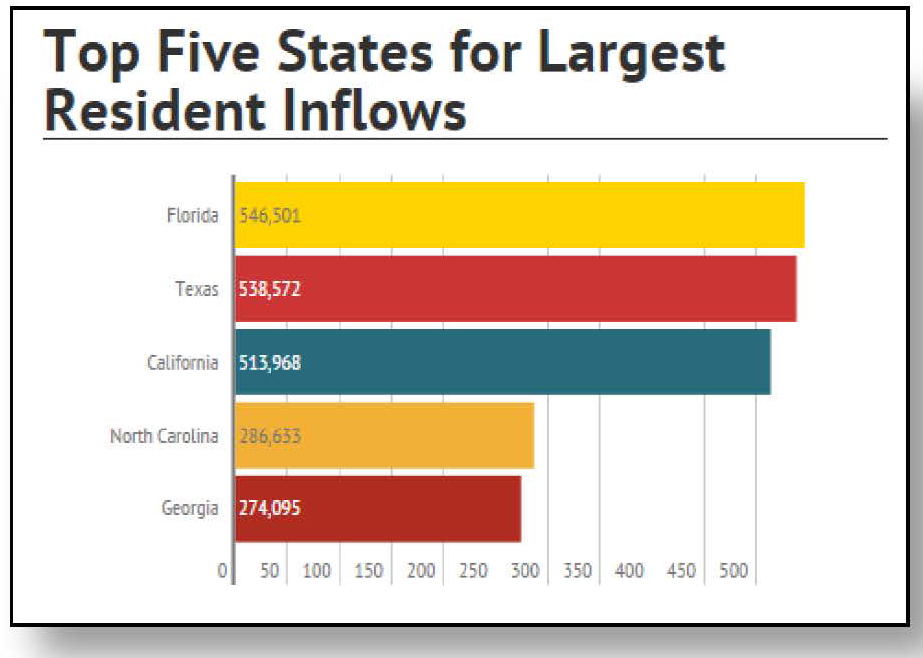 AUSTIN, Texas – Texas ranked second in the nation for relocation activity in 2014, according to the 2015 Texas Relocation Report released today by the Texas Association of Realtors. Based on data from the U.S. Census Bureau, the report shows that Texas continues to be a high-demand destination for residents moving from out of state.

Scott Kesner, chairman of the Texas Association of Realtors, commented: “2015 has been a great year for Texas, with healthy economic diversity driving much of our state’s population and job growth. Texas is not only a global leader in oil and gas production, but a national hub for technology, manufacturing, and several other industries. The Lone Star State continues to be a great place to live as well as start a business, and the more than half a million people who move here every year are proof of that.”

Overall, Texas had a net gain of out-of-state residents in 2014, with 103,465 more people moving to Texas than Texas residents moving out of state.

Harris and Dallas counties remain the top two most mobile counties in the Lone Star State, ranking No. 1 and No. 2 in Texas, respectively, for both the largest inflow and the largest outflow of people. Both of these counties once again posted the highest net losses of residents moving out of county, with Dallas County posting the highest net loss of people (27,155) followed by Harris County (18,297).

Kesner concluded, “Texas’s unprecedented growth can only continue if our state has the infrastructure and high quality of life to support it. The Texas Association of Realtors encourages voters to vote for Proposition 1 on Nov. 3 to keep Texas an affordable place to own a home by providing property tax relief and permanently banning a real estate transfer tax, and vote for Proposition 7, which will provide up to $2 billion in much-needed transportation funding for our growing state.”