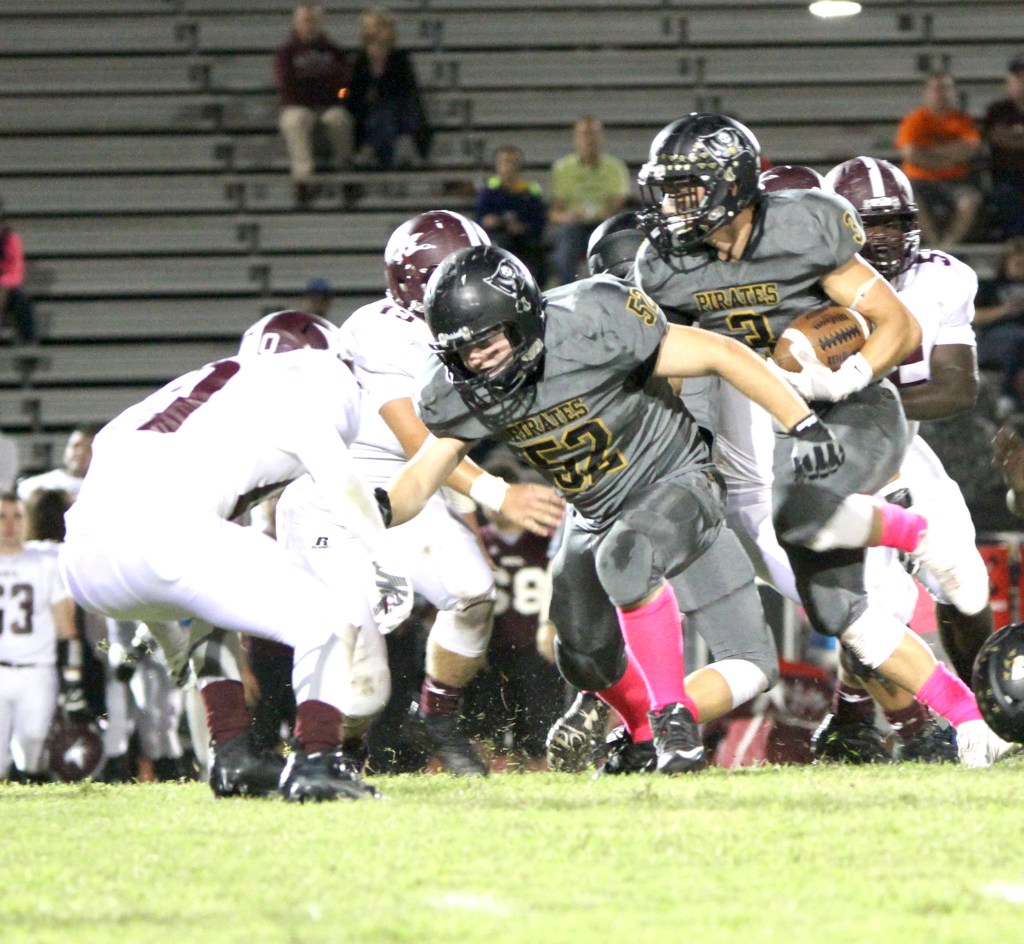 By Ronnie Hughes / The Orange Leader ———

VIDOR — The Pirates ground game came to life Friday night as Vidor earned its first district win of the season with an 83-54 thrashing of Baytown Lee.

Both teams went blow for blow exchanging touchdowns in the first half of the game, but it was Vidor which struck first within 32 seconds on a Trevor Duff 57-yard burst up the middle for a 7-0 lead.

Ganders quarterback Javarius Irving, who finished the night with 13 carries for 189 yards, responded on the next play with a 75 -yard jaunt past the Pirates (2-3, 1-1), but Vidor retained the lead following a failed extra point, 7-6.

A Vidor fumble on the kickoff lead to another touchdown by Irving a few moments later and a 13-7 Lee (0-5, 0-2) lead. Ten seconds later Vidor quarterback Kolbie Humble went 73 yards and gave the Pirates the lead at 14-13.

Lee responded on the next drive as Irving threw a 34-yard scoring strike to Victor Clarke and a 19-14 Ganders lead.

Vidor wasted little time in answering as Blake Rowe went 35 yards for another Pirates touchdown to regain the lead.

Irving and the Ganders responded yet again as the agile quarterback launched a 77-yard scoring toss to Jacory James for another lead.

The Pirates moved down the field quickly and Rowe powered through for a 1-yard score. Both teams combined 414 total yards in the first quarter and the Pirates leading 28-26 after the conclusion of the opening period.

The Pirates defense stiffened in the second quarter and held the Ganders out of the end zone, while the offense continued its scoring frenzy as Haylon Leckelt scored on the next series with a 44-yard sprint.

A couple of minutes later, Leckled added a 62-yard run and gave the Pirates the lead for good at 42-26 with 8:18 remaining in the second quarter.

Vidor kept the momentum going its way as Coach Jeff Mathews called for an onside kick, which the Pirates recovered. Moments later Rowe added a 42-run up the middle and put Vidor up 49-26. 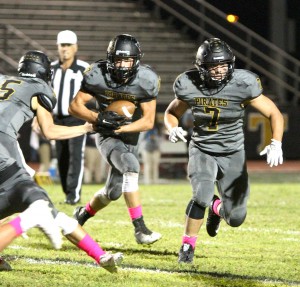 Leckelt, who had three scores on the night, went 54 yards on the next Vidor series and then Humble tossed a 34 yard touchdown to Seth Smith to make the score 62-26 at the break.

Baytown Lee’s Zavier Wright started the scoring off in the second half with a 2 -yard scamper to narrow the Pirates lead to 62-33.

A couple scores later, which included Vidor’s Kolbie Humble adding a 5-yard TD run for the Pirates late in the third quarter, while Irving scored with a 19-yard blast to pull the Ganders closer at 76-40.

Irving added a 15-yard touchdown run for the Ganders while Wright added the game’s final score with a 11-yard run with 1:49 remaining. 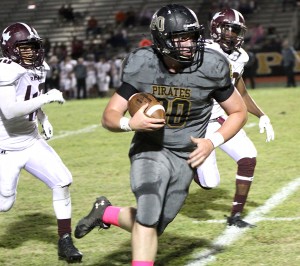 Vidor’s Dalton Poteet (80) looks for room down the sideline after hauling in a pass in the first-half of Friday’s victory over Baytown Lee. (Tommy Mann Jr. / The Orange Leader)