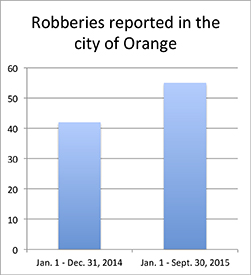 ORANGE — An increase in robberies in the city has caught the eye of local law enforcement.

“We have arrested several in connection with robberies,” Orange Police Department Captain Cliff Hargrave said. “They are not all connected.”

Hargrave confirmed the robberies were not the result of one group or individuals.

Orange Police Department is searching for leads in a recent robbery.

A 72-year-old man was robbed at 1 p.m. Wednesday at the 900 block of North 2nd Street in Orange. The man told law enforcement he was sitting at a picnic table when two individuals asking if he knew anyone needing lawn work approached him.

The two persons grabbed the man, and tackled him when he attempted to escape. The suspects struck the man several times before taking the man’s keys to his vehicle and stealing the man’s 2006 red Ford Taurus.

The case remains under investigation.

“We do not have any leads at this time,” Hargrave said. “In the meantime, we keep investigating.”

Hargrave also said the increase in robberies appear to be at convenience stores and hotels.

Anyone with information is asked to call the Orange Police Department at 409-883-1026.