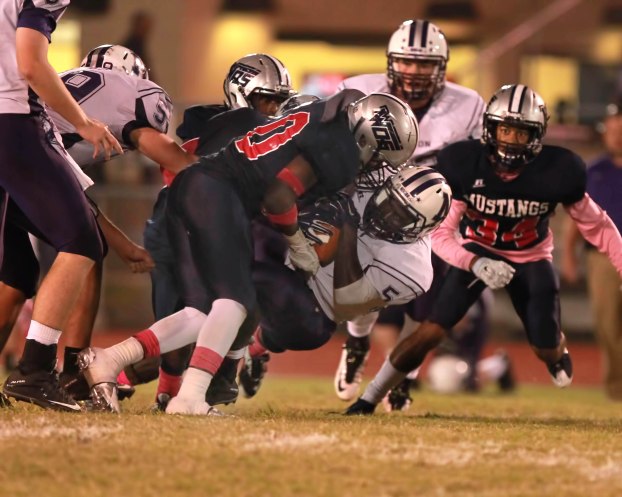 of the Week but if it was  billed as a heavyweight fight, it would
have been called a TKO early.
The West Orange-Stark Mustangs left little doubt Friday night as they
put together 27 points in the second quarter as they went on to
throttle the Newton Eagles 48-6 in a matchup that featured two state
runnerups from a year ago and two of the most tradition-rich programs
in the state.
WO-S (5-1) was state runnerups in 4A Division II last season while
Newton 1-4) was the 3A Division II state runnerup.
The Mustangs actually looked like they came out “angry” after
suffering a tough loss to Richmond Foster last Saturday. The “short
week” did not seem to bother the Mustangs, especially in the first 24
minutes.
WO-S outgained the Eagles 311-38 in the first half. Quarterback Jack
Dallas completed 8-of-12 first half passes for 201 yards and three
touchdowns. He finished 10-of-15 for 288 yards and four touchdowns.
The biggest highlights were two 72-yard touchdown passes from Dallas
to swift receiver KJ Miller, who had two catches for 144 yards.
Meanwhile the Mustang defense limited the Eagles to just one first
down in the half and all 38 of Newton’s yards came on the ground on 17
tough carries.

The Mustangs finished with a season-high 535 yards. Tailback Melech Edwards sparked the Mustang ground game with 167 yards on 16 carries.

Newton did finish with 194 yards on the night, all on the ground. Jaron Hanks led the Eagles with 104 yards on 15 carries while Gabe Foster and Brodrick Spikes had 90 yards combined on 24 carries.

The Mustangs opened the contest with a flurry as Dallas hit Miller in
stride over the middle of the field and the speedster cut to the right
sideline and romped to a 72-yard touchdown pass to make it 7-0 with
10:16 left in the first quarter.
After stuffing Newton on fourth-and-2 from the WO-S 45, WO-S drove all
the way down to the Eagle 7 but the Eagles held the Mustangs on
fourth-and-2 from the 7.
The Mustangs bounced back nicely, holding the Eagles to a
three-and-out and took over at the Eagle 28 after a 20-yard punt.
The Mustangs found the end zone seven plays later. Dallas connected
with a receiver Aric Cormier on a big 12-yard pass along the right
sideline on fourth-and-7 that got to the Eagle 13. Malick Phillips
finished off the drive playing as the “Wildcat quarterback” as he
scooted into the end zone by going five yards off right tackle on the
first play of the second quarter, upping the margin to 14-0 with 11:53
remaining in the half.
The Mustangs put together a five-play, 66-yard scoring march early in
the second quarter. Dallas hooked up with Jay’len Mathews on a
important 16-yard pass on third-and-8 that got to the Eagle 34.
Tailback Melech Edwards quickly made it 21-0 when he sailed around
the left in, breaking one tackle, and scooted 31 yards to paydirt with
8:49 left in the half.
WO-S mastered a six-play, 71-yard scoring jaunt a few minutes later.
After Edwards and Dallas combined for 23 yards on three carries,
Dallas found receiver Thomas Wallace along the right sideline. Wallace
muscled away from a Newton defender, hauled in the ball and raced 36
yards for a touchdown to make it 27-0 with 5:10 in the half.
The misery continued for the visiting Eagles.
Cormier picked off a pass by Eagle quarterback Brock Barbay and
returned it to the Eagle 39. Two plays later Dallas threw a beautiful
pass over the top of the Newton defense, hitting Rufus Joseph in
stride. Joseph did the rest, converting the 33-yard pitch-and-catch
for the score, upping it to 34-0 with 2:50 in the half.
The Mustangs navigated 91 yards in six plays to score late in the
third quarter. It was capped by Dallas and Miller again. Dallas hit a
wide-open Miller down the leftsideline for about 30 yards and Miller
scooted the remaining 42 yards for the 72-yard score to make it 41-0
with 0:50 left in the third.
Newton finally got on the scoreboard with a four-play, 63-yard drive
thanks to a 58 yard sprint by running back Jaron Hanks to the Mustang
3 and he finished it with a three-yard dart off left tackle to trim it
to 41-6 with 11:27 left.
The Mustangs retlaited with a eight-play, 70-yard scoring march.
Edwards carried four times for 58 yards on the series, including a
41-yard scamper to the Eagle 16. Fellow back Jeremiah Shaw capped it
with a five-yard touchdown run to make it 48-6 with 6:42 left.
The Mustangs will start defense of their District 9-4A Division II
title next week when they visit Liberty to take on the Panthers. 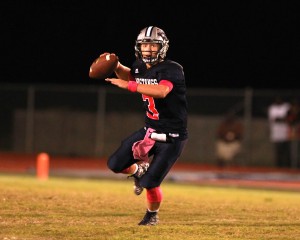 Mustangs quarterback Jack Dallas (3) rolls out for a pass against Newton on Friday night. (Mark Pachuca / The Orange Leader)

By Van Wade / The Orange Leader———— SPLENDORA — With their running game clicking on all cylinders, the Little Cypress-Mauriceville... read more