Track meet on grass: Vidor outruns Nederland, but not on scoreboard 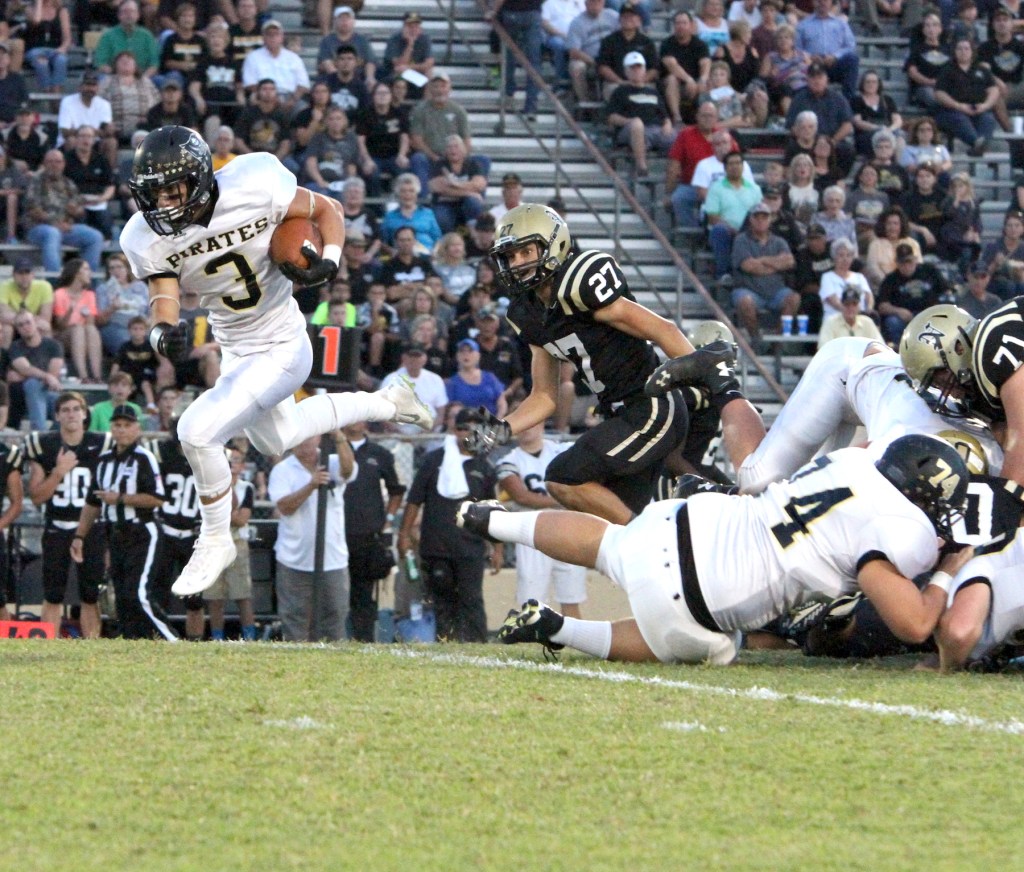 Pirates running back Haylon Leckelt (3) leaps over some Nederland players on his way to a Vidor touchdown early in the first quarter. (Tommy Mann Jr. / The Orange Leader)

NEDERLAND — This was what the Nederland Bulldogs might have been afraid of: the Vidor Pirates having a field day running the football.

It was more like a track meet. And Nederland beat Vidor to the finish line.

Dean Fisher pulled down a tough vertical catch from Mitchell LeBaron and spun off a defender for the go-ahead touchdown with 2:16 left, and the Bulldogs pounced on a fumble with 1:23 to go to start District 22-5A play with a 36-30 home victory Friday night.

“I think they were happy with those long drives — [Vidor coach Jeff] Matthews even admitted it, to control the ball and shorten the game and keep our offense off the field, and they did that,” Nederland coach Larry Neumann said. “It was a great high school football game, and I was proud of Vidor and us. I’m more proud of us, don’t get me wrong, but I told coach Matthews, they play the game the way it’s supposed to be played. Hard-nosed high school football.”

Vidor outgained 481-470 in total yards. Still, Nederland got to the finish line thanks in large part to LeBaron, who completed 13 of 16 passes for 290 yards.

LeBaron’s longest strike was a 67-yard bomb to a wide open Connor Perkins in the first quarter to give Nederland a 14-7 edge.

“What Mitchell has developed is the ability to extend plays and create,” Neumann said. “There were two or three plays he made that were not drawn up like [he created].”

Fisher, a first-year varsity player and a junior, had six catches for 92 yards, including the game winner. Vidor, though, was left with probably more time than Nederland wanted.

A 15-yard roughing-the-passer penalty followed up a 15-yard pass from Kolbie Humble to Haylon Leckelt — one of four passes the Pirates attempted all game — moving the ball to the Nederland 40. Vidor then committed a false start and earned a first down before a bad handoff resulted in a fumble recovered by the Bulldogs.

Vidor accounted for all but three of its 285 first-half yards on the ground. But Nederland had a few big plays of its own to avoid trailing before the half and going into halftime at 21-all.

“We just made alignment changes and we just remembered the plays,” Nederland sophomore defensive back Randy Wistner said. “The backs were moving everywhere, and it’s tough to just watch one back.”

No matter how quickly the Bulldogs struck — Austin Krautz sailed 63 yards for a score on the first play from scrimmage of the game — the Pirates weren’t going away easily. Three plays into their first drive, Leckelt dashed 62 yards and kept his balance from a near-tackle by Wistner for the score.

Vidor took its first lead at 27-21 midway through the third quarter, but a bad snap in extra-point formation led to a big loss of yards. Nederland regained the lead at 28-27 at the 1:55 mark on LeBaron’s 14-yard scramble.

The Bulldogs rolled the dice and were stopped for a 2-yard loss on fourth-and-goal from the 3. The very next play, Humble sprinted 70 yards, only to be backed up 15 yards by a sideline interference call. The Pirates settled for a Bridger Quirante field goal from 22 yards out with 3:31 left.

“It was going to come down to who wanted it more,” Krautz said. “That’s what I preached to the guys in the locker room at halftime.”

Humble completed all four of his passes for 44 yards and rushed 10 times for 134 yards to lead the Pirates. Leckelt tallied 130 yards and Ty Stevenson finished with 109. 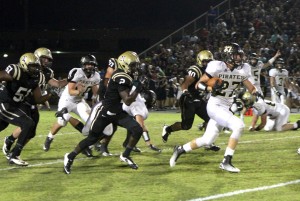 Vidor running back Trevor Duff (27) breaks out for a big gain late in the second quarter Friday against Nederland. (Tommy Mann Jr. / The Orange Leader)