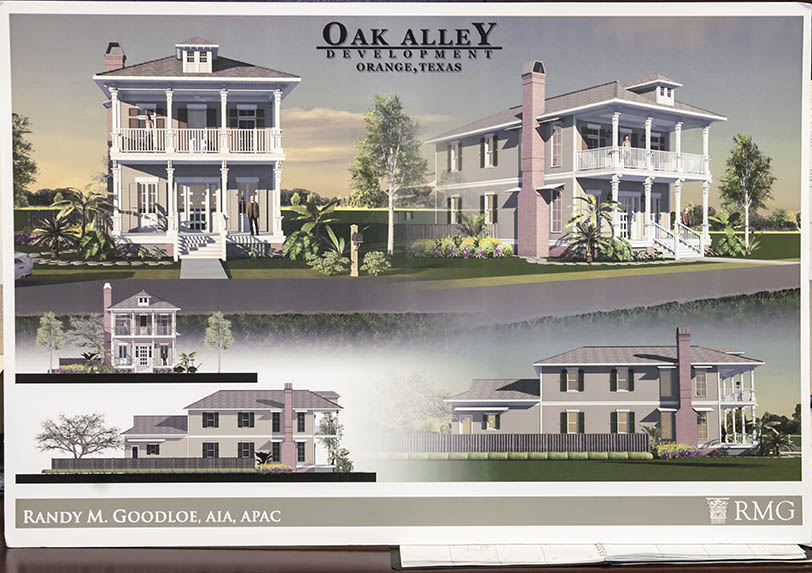 Dawn Burleigh/The Orange Leader The Oak Alley Development project is just one of the major projects the City of Orange Economic Development Corporation is working on to bring new business and growth to the area.

ORANGE — City of Orange Economic Development Corporation (EDC) is proactively working in a new direction to bring businesses and growth to Orange.

“We are working to move in a new direction to improve visibility,” City of Orange Director of Economic Development Jay Trahan said.

Trahan is a Certified Economic Developer through International Economic Council, one of 1,200 active in the country. He has been with the city of Orange as director of economic development for seven years.

The EDC is currently focusing on areas of retail/commercial attraction along Interstate 10, 16th Street and downtown Orange.

“At the top of the list is attracting sit down dining restaurants,” Trahan said. “We are also focusing on residential development, industrial expansion and new capital investment projects.”

Part of attracting new businesses to consider Orange as a viable option is to show growth in the population. To accomplish this the city is in a partnership with ITEX Homes for a new residential development at Cypress Village. The development will include up to ten new homes a year over a three-year period. The city and ITEX will provide a $5,000 financial incentive for closing costs for the sale of each home.

“The EDC will extend this financial incentive to any developer building a new single-family home in the city, subject to EDC Board and City Council approval,” Trahan said.

With new water and sanitary sewer lines along Allie Payne Road being extended to the White Oak area, a new residential development project is currently in the planning stages between the city and David Hinds Sr. and David Hinds Jr.

“There will be up to 15 half-acre lots available for residential development with this new project,” Trahan said. “The infrastructure should be completed by summer 2016.”

Trahan said both locations, allowing for residential growth in the north and south of the city, are at based flood elevation.

“Neither area had water with Hurricane Ike,” Trahan said. “I am excited about improving the housing inventory for the city.”

Commercial growth is also expected with the relocation of 15th Street at Interstate 10.

The street will be relocated closer to the railroad tracks to allow the area along 16th Street from the new frontage road and to the south for new commercial development according to Trahan.

“The city is in partnership with Jeff Mallett Commercial Development, owner of the property, to attract new restaurants and retail at a high-traffic intersection at 16th Street and Interstate 10,” Trahan said.

TEPA is through the Governor’s Office of Economic Development, which with a State of Texas sales tax and use tax rebate per job retained or created for a range of $2,500 -$5,000 per job.

INVISTA, Sabine River Works with a capital investment for facility and equipment upgrades of $225,800,000 will retain 500 jobs over the next five years.

Cloren, Inc. is making a $6,400,000 investment for facility and equipment upgrades, which will benefit 118 jobs and retain 500 jobs over the next five years.

A separate incentive was the voluntary annexation of International Paper. The company is making an $80 million capital investment with the agreement to retain 300 jobs.

The long-term plans of a major industry with the agreements for job retention reflects on the industry’s commitment with the city, according to Trahan.

Growth is also reflected in the shipbuilding industry in Orange as Conrad Shipbuilding is currently expanding and West Port Marine opening earlier this year.

“As part of the EDC, we also want to attract outside dollars with tourism events,” Trahan said. “People who stay in our hotels, also buy gas, groceries and eat at local restaurants,” Trahan said. “With the Hotel/Motel Tax funds generated, we are able to promote Orange.”

The city and EDC recently hired a consulting firm for expanding economic growth potential for the city.

“Consulting firms can be the initial contact before reaching out to the local EDC in order to keep off the radar,” Trahan said.

The Orange Convention and Visitors Bureau (CVB), to promote Orange and tourism, have recently increased the number of events in the city.

“Over the past five years, we had three event,” CVB Coordinator Ashley Mahana said. “We have tripled that number in five years.”

The newest event is a Wine and Jazz Fest scheduled for March 19, 2016.

“We are always looking for new ideas to draw tourism and guests to Orange,” Mahana said.

The CVB also partners with other entities to hold other events.

“The more hotel stays, the more revenues increase,” Mahana said. “In turn, it increases the budget for holding events.”