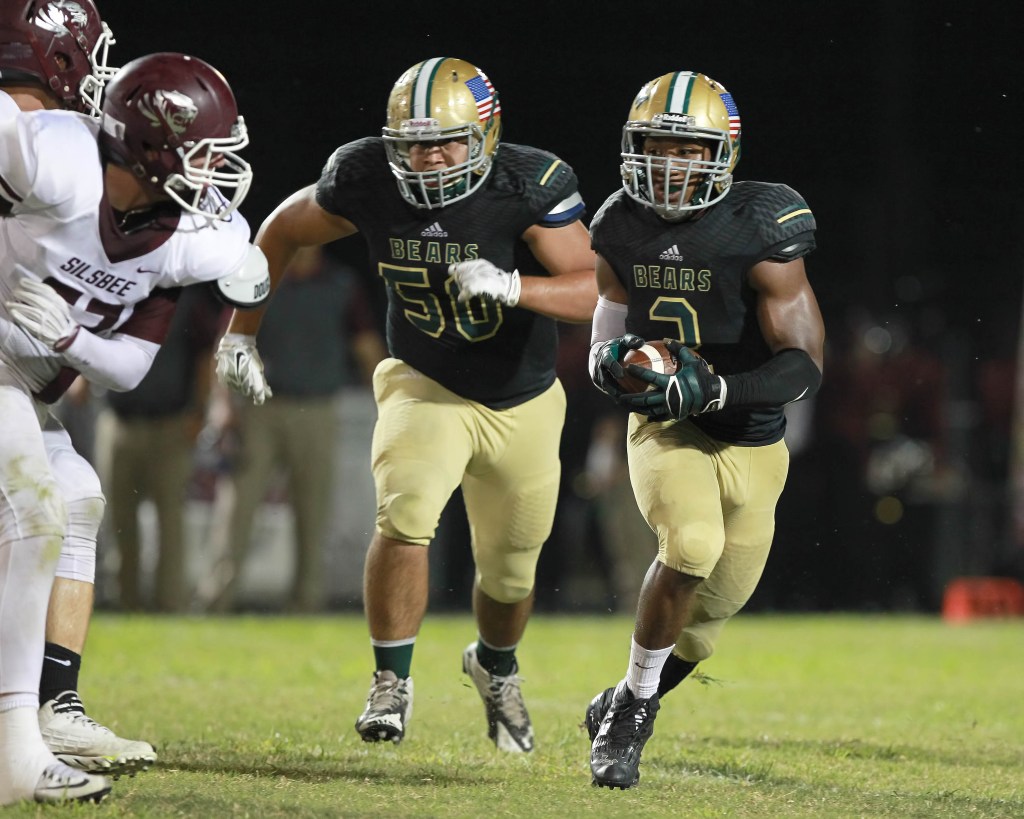 LC-M running back Sam King (2) follows his blocker during first half action against Silsbee on Friday night. (Mark Pachuca / The Orange Leader)

LITTLE CYPRESS – Even though they controlled the clock for the most part and did not let outstanding Silsbee quarterback Dontre Thomas break away on any long plays, the Little Cypress-Mauriceville Battlin’ Bears came up short in their District 10-4A Division I opener Friday night, falling to the visiting Tigers 38-21.

Thomas did score three rushing touchdowns for the Tigers (4-1). He finished with 118 yards on 18 carries while completing 8-of-15 passes for 92 yards.

LC-M controlled the time for the most part with their ground game.

Silsbee tailback Adonis Thomas had 80 yards on 16 totes. The Tigers fashioned a 13-play, 86-yard scoring drive late in the
fourth to seal it. Running back Desmond Armstrong hauled in a screen pass from Thomas and took it 32 yards for the score on a fourth-and-8 play with 4:36 remaining.
LC-M pulled to withing 31-21 with 9:57 left when Douglas scored on a one-yard run off right tackle to complete a four-play, 62-yard drive. Douglas set up his own score when he bolted on a 44-yard jaunt down
the right side all the way to the 1.
The Bears started the second half with a 15-play drive that started from their own 22 and they chewed 7:15 off the clock but they came away empty-handed as the Tigers held at their own 39.
The Tigers responded with a eight-play, 55-yard scoring drive. The Thomas’ combined for 48 yards on the ground with Dontre Thomas finishing it off with a one-yard touchdown plunge to push the Tiger lead to 31-14. with 1:32 remaining in the third.
LC-M kept the Silsbee offense off the field a lot in the first half but they still found themselves down 24-14 at intermission.
The Bears took the first possession of the night and put together a 11-play, 76-yard drive that featured Winters a lot.
Winters carried the ball five times for 58 yards, including a 30-yard dart around the right end.
The Bears sealed the drive with some trickery on fourth-and-7 from the Tiger 16 when quarterback Bickham tossed the ball back to Winters. Winters headed to the right and threw it back to a wide-open Bickham, who was streaking wide open along the left side. Bickham did the rest, scoring on a 16-yard pass play as the Bears ate up 6:17 off the clock. Tyler Brown booted the extra-point, giving the Bears the 7-0 edge with 5:43 left in the first quarter.
Winters had 96 yards on 10 carries in the first half.
The Tigers quickly retaliated by zipping 59 yards in nine plays to take the lead. Dontre Thomas sealed the march with a 14-yard scamper and the two-point conversion run to hand Silsbee a 8-7 edge with 2:37 left in the first.
The Tigers manufactured a short, eight-play, 49-yard touchdown drive early in the second quarter. Tailback Adonis Thomas had a nice 14-yard run to the Bear 8 and then he capped it with a eight-yard scamper around the left end. Dontre Thomas ran in the two-point conversion to push the Tiger lead to 16-7 with 7:48 in the half.
That just motivated the Bears, who answered right back with a 12-play, 64-yard scoring drive that chewed up 5:05 off the clock.
David Webb got it going with a 14-yard dart to the 50. Sam King carried the ball three times for 21 yards, including a 12-yarder.
Fullback J’Lon Douglas capped it with a two-yard touchdown plunge to trim the Tiger edge to 16-14 with 2:37 in the half.
Silsbee answered quick again, navigating 53 yards in just five plays to hit paydirt again. Tredarius Lowe had a 17-yard run to the Bear 36.
Dontre Thomas sprinted for a 13-yard run up the middle that got to the Bear 8.. Two plays later, Dontre Thomas scored on a two-yard keeper and then completed the two-point conversion pass to Desmond Armstrong to make it 24-14 with 1:22 left.
The Bears almost inched closer at the end of the half, getting all the way to the Tiger 6 before Armstrong picked off a desperation pass by Bickham as time expired. The Bears had started from their own 32 on the series but Winters got them going with a 30-yard run down the left sideline that got all the way to the Silsbee 29.
LC-M outgained the Tigers 190-158 in the first 24 minutes. Dontre Thomas had 72 yards on nine carries  and 24 yards passing for the Tigers while Adonis Thomas had 38 yards on six totes.
The Bears will look to snag a 10-4A road victory next week when they visit the Splendora Wildcats. 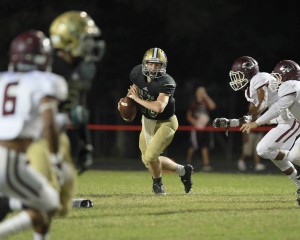