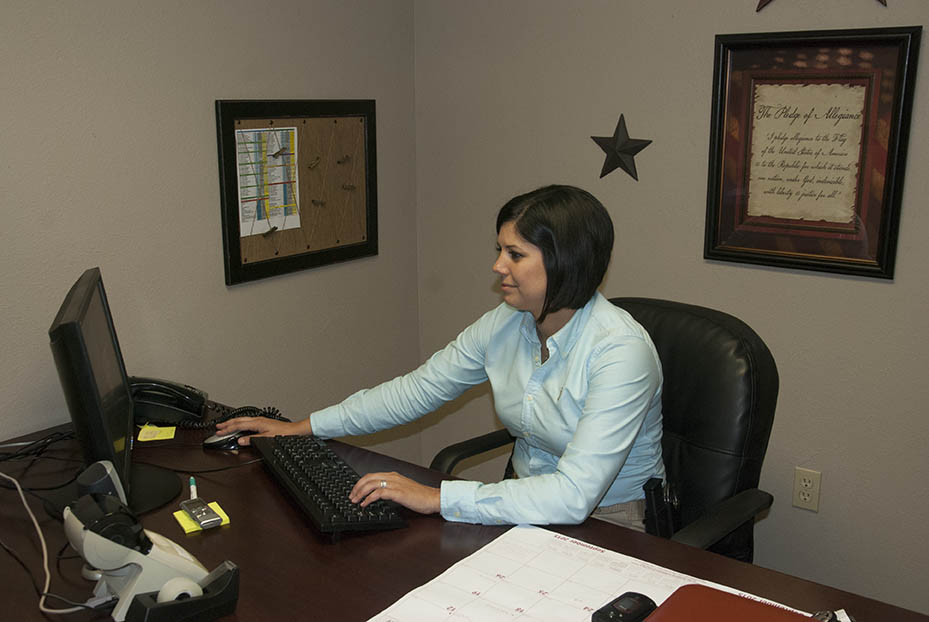 Dawn Burleigh/The Orange Leader Detective Jessica Johnnie is already hard at work as her third day in her new position. Johnnie was promoted to Investigator in the Criminal Investigations Division at the Orange County Sheriff’s Office on Sept. 2.

Jessica Johnnie, 30, always knew she wanted to be in law enforcement and was the only female patrol deputy in 14 years when she started at the Orange County Sheriff’s Office (OCSO) eight years ago.

“I knew as a child I wanted to be an officer,” Johnnie said. “I took criminal justice classes in high school and at Lamar State College Orange.”

Johnnie interned at OCSO before being hired in Dispatch.

“There were no openings in patrol at the time,” Johnnie said. “I worked in Dispatch for eight months and then almost eight years on patrol.”

Johnnie said she will miss being on patrol and responding to calls.

“I have a strong love for patrol,” Johnnie said. “It is hands on helping people.”

Often when law enforcement meets citizens, they see people at the worse moment of a person’s life.

“The best part of the job is when you deal with kids. You run into them later and they tell you thank you,” Johnnie said. “That is when you know you made a difference when they think of you as a friend and remember you.”

Johnnie said no one actually wants to call the police so it is a good feeling to be able to have a positive impact in the middle of the chaos.

“When we see people, it is at a crucial time, a tragedy,” Johnnie said. “So when they see you later and they recognize you, you meant something to them.”

Johnnie will work out of the OCSO substation in Vidor.

Sergeant Joey Jacobs, over the Vidor/Mauriceville CID office, described Johnnie as a valued asset to the office.

“She has always been an asset,” Jacobs said. “We are excited to have her here. She has definitely found her calling. She is a natural. Johnnie is a gifted and talented officer and always has been.”