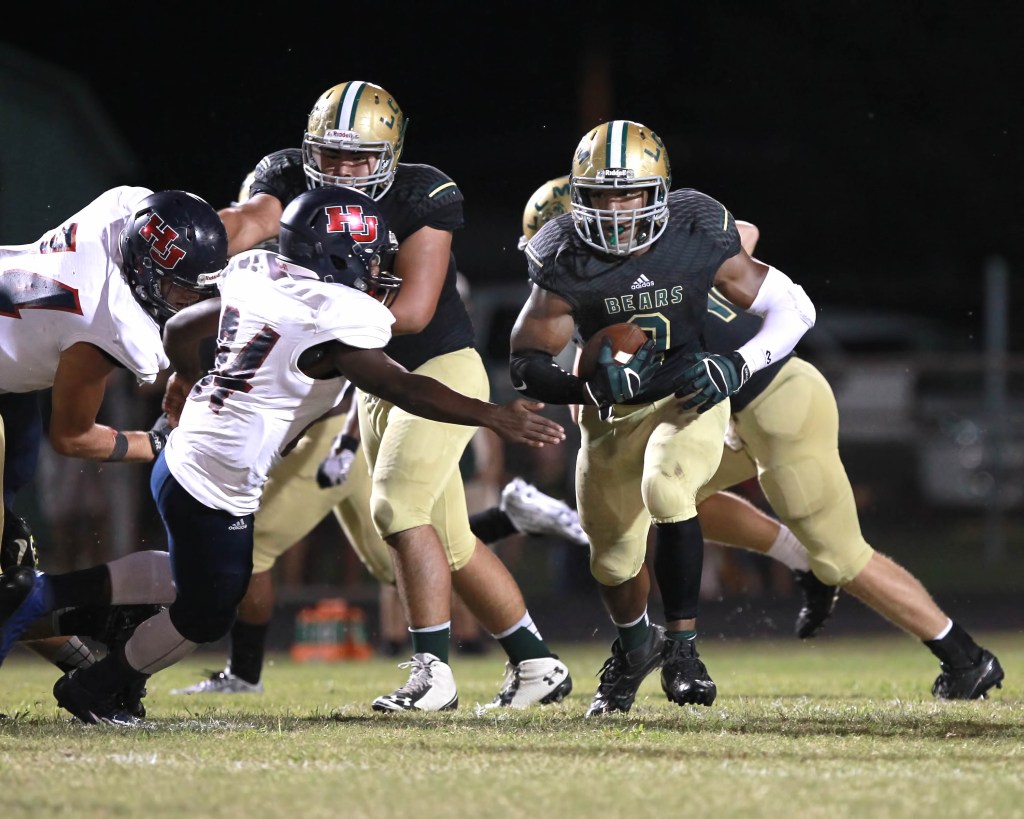 J'lon Douglas breaks into the open for a nice gain on Friday night. (Mark Pachuca / The Orange Leader)

LITTLE CYPRESS – It was a ground-and-pound kind of night at Battlin’ Bear Stadium Friday night.

And it was the home team that handing out the final pounding as the Little Cypress-Mauriceville Battlin’ Bears picked up their first win of the season with a 42-28 victory over the Hardin-Jefferson Hawks.

H-J pounded out 347 total yards, all of it via the ground. Sam King led a balanced Bear ground game with 122 yards and a touchdown on 15 carries.

Fullback J’Lon Douglas earned 82 yards on 21 carries. Chris Winters had 61 yards on 13 carries and two TDs. Quarterback Beau Bickham completed 3-of-6 passes for 72 yards and a score and rushed four times for 52 yards and two TDs.

LC-M broke from a 21-21 tie late in the third quarter with a seven-play, 70-yard scoring drive. Bickham finished it with a nifty
44-yard keeper around the left side for the score. The extra-point kick failed as LC-M led 27-21 with 1:40 in the third.
The Bears received a big defensive play from Winters on the first play of the fourth quarter when he picked off H-J quarterback Logan Thompson at the Bear 42.
LC-M promptly scored on a quick hitter when King busted through one tackle and outran the Hawk secondary on a 58-yard touchdown romp. Bickham ran in the two-point conversion to push the lead to 35-21 with
11:39 remaining.
The Hawks retaliated with a six-play, 50-yard scoring drive that was finished off with a Moreaux 33-yard touchdown sprint up the middle to make it 35-28 with 8:45 left.
LC-M put it away with a superb 14-play, 65-yard drive that ate 6:43 off the clock. Winters completed it with a five-yard run off right tackle with 2:02 remaining. Bickham had a critical five-yard gain on fourth-and-3 from the H-J 17 that kept the drive alive.
The Bears used a little “air show” to score on their first series of the second half when Bickham teamed up with tight end Mitchell Lee on a perfect strike on the right sideline. Bickham put the ball just over an outstretched defender and Lee did the rest, zipping 46 yards for the score, giving the Bears a 21-14 advantage with 8:11 left in the third.
H-J responded quickly however, going 74 yards in just five plays to knot the score at 21-21.
Quarterback Logan Thompson broke loose on a 24-yard keeper. Tilley rumbled for a 21-yard gain to the Bear 18. Moreaux galloped 14 more yards to the 4 and Tilley capped it with a four-yard run off left tackle with 5:58 in the third.

The Hawks took their first possession of the game and chewed up 88 yards in 12 plays to hit paydirt as they took 6:02 off the clock on the march. Tilley capped it with a 17-yard touchdown dart up the middle as he broke away from several LC-M tackle opportunities and kicker Nolan Harvill made it 7-0 with 3:36 left in the first quarter. Tilley had five carries for 41 yards on the series while Moreaux had three totes for 29.
The Bears answered nicely on their next drive, navigating 70 yards in 12 plays to even things up. Chris Winters sealed the nice march that ate up 5:41 off the clock by showing blazing speed around the right end for a 19-yard touchdown scamper. Eduardo Ruiz nailed the extra-point as the Bears tied it up at 7-7 with 9:52 left in the half.
The Hawks struck back with authority on their next set of downs. Tilley ripped off a pair of 10-yard runs. Moreaux had a 10-yard burst as well and finished off a six-play, 65-yard drive with a 35-yard touchdown blast up the gut to give the Hawks a 14-7 edge with 6:18 in the half.
LC-M scrapped right back, answering with a 13-play, 55-yard scoring jaunt. Bickham connected with David Webb on a nice
13-yard pass that put the Bears in H-J territory. The Bears then grinded it out. Winters had two nice 11-yard scampers,
the last one down to the H-J 6. Three plays later Bickham scored on a one-yard sneak to tie it up again at 14-14 with 0:32 in the half.
The Bears converted a nice pooch kick into a turnover on the ensuing kickoff as LC-M’s Drake Dietze fell on the loose leather at the Hawk 24 with 0:29 left. However, the Bears could not capitalize with three incompletions and a tough pitch.
H-J finished with 186 total yards in the half, all on the ground.
Moreaux had 107 yards on six carries while Tilley had 59 yards on eight carries.
The Bears had 131 yards in the half. Douglas had 54 yards on 13 carries for the Bears while Winters had 34 yards on eight carries and King had 33 yards on eight totes.
The Bears will open up District 10-4A Division I play next week when they play host to the Silsbee Tigers. 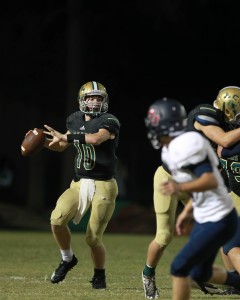