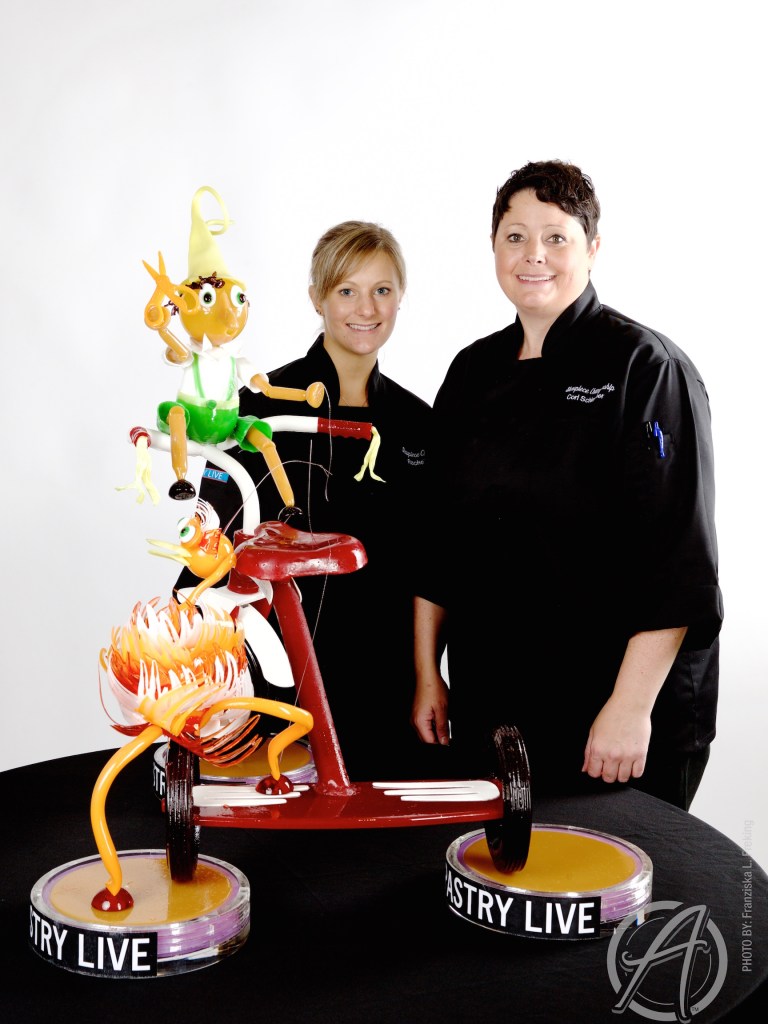 Special to The Leader———

Pastry Live is proud to announce Team Kengo Akabame and Toshinori Akishiro of Imperial Hotel Tokyo as this year’s Showpiece Champions. Along with earning the title of Best Overall Showpiece and a cash prize of $5,000, the team ran away with three other awards as well including – Best Chocolate, Sponsor’s Choice, and People’s Choice for their innovative design portraying this year’s theme: “Toys.”

7 teams of two chefs competed on Tuesday, August 25th over the course of seven hours, constructing showpieces utilizing a unique trio of pedestal bases, encouraging an entirely new range of showpiece design. Team Akabame’s chocolate showpiece, “The Dreams of Boys,” was favored by the judges for its great technique and overall high quality workmanship. Additionally, their showpiece was praised for its imaginative use of the theme as the duo executed a clear vision of the world of boys’ favorite toys through their original design. With close attention to detail, the inspiration behind their design was their own dreams as children, of being able to ride and operate their toy cars, trains, and robots all by themselves.

Best Sugar Showpiece was awarded to Cori Schlemmer and Rachel Young from L’Auberge Casino Resort Lake Charles. The highlight of their showpiece was an amazing tricycle made entirely of sugar. The piece was also praised for its figurine pinocchio balancing on the handlebars. The team’s sugar-work was also held in high regard for its flawless appearance and construction, and the high degree of skill shown.

Close behind Team Team Akabame in overall points was Team Lionel Touya (Jean Marie Auboine Chocolates) and Christophe Rull (MGM Grand Hotel and Casino) who were awarded Best Artistry by the judging panel. The inspiration for their design was found in their own great-grandfather’s attic where they found treasures in the vintage toys. Their vision sought to bring to life classic toys with Old World techniques and woodwork. The focal point of the piece was a life-sized Pinocchio atop an antique toy chest surrounded by a chocolate train dating back to the 1900s.

Chosen by their peers for the for the Competitor’s Choice Award was Team Julie Eslinger and Mara Ramirez, for their showpiece involving a circus-esque theme. Their design highlighted characters all connected by marionette strings – an accordion-playing clown and dancing ballerina, and was praised for its bright, colorful flowers and overall flow.

The Showpiece Championship calls for competitors to push the boundaries of normal showpiece construction, but without requiring huge financial and personal sacrifices from competitors. Rather than constraining chefs with endless rules and regulations, The Showpiece Championship is a new form of competition that encourages chefs to compete at the highest level possible. Each team exhibited a high level of creative capability, demonstrating what minimal restrictions produce. Pastry Live wishes to congratulate chefs Kengo Akabame and Toshinori Akishiro for winning this year’s Showpiece Championship. Pastry Live also thanks each competitor for their outstanding work, professionalism and for helping to make this yet another successful year.

For more details about Pastry Live and The Showpiece Championship, please contact Event Producer Chef Paul Bodrogi at chef@pastrylive.com or 678.881.9490. Further information is also available on our website at www.pastrylive.com.