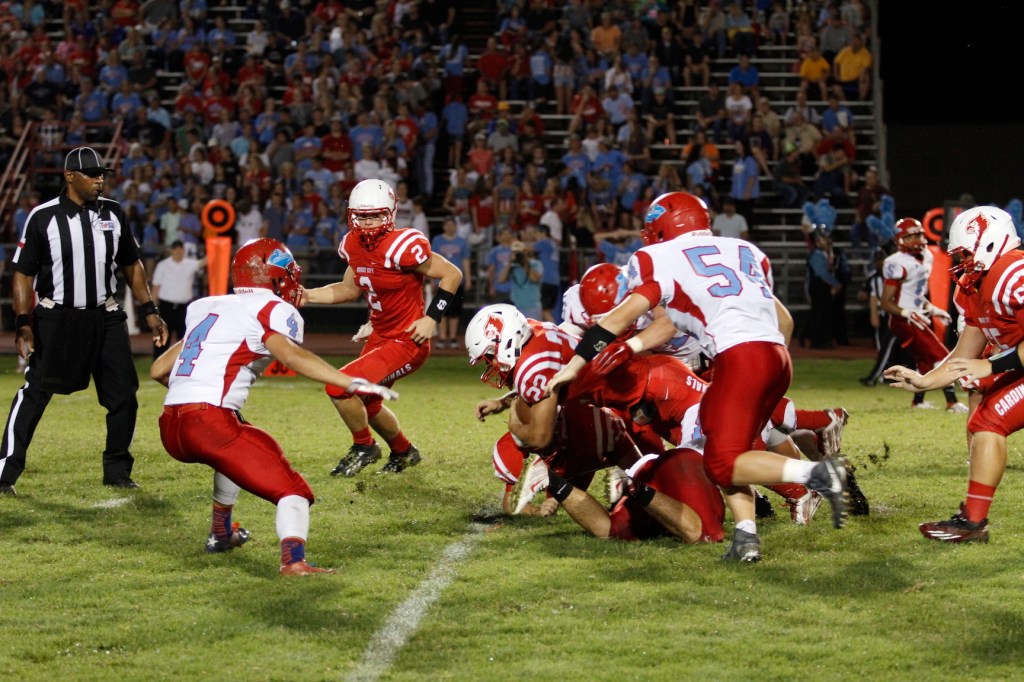 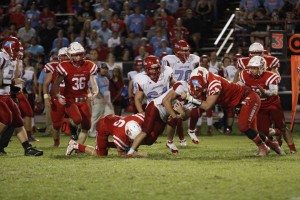 BRIDGE CITY – The Bridge City Cardinals have made waves across Southeast Texas, winning against some of the top teams in the state by grinding out wins by controlling the clock.

On Friday night at Larry B. Ward Stadium, the Cardinals were beaten at their own game.

The Lumberton Raiders escaped with a 19-14 non-district win after dominating at the line of scrimmage, a ploy the Cardinals had perfected the past two weeks.

“Lumberton is a good ball club,” said Bridge City head coach Dwayne DuBois. “They just physically whipped us up front, offensively and defensively. That’s a testament to the hard work those guys put in over there.”

The Cardinals, who had beaten back-to-back state-ranked teams to start the year, seemed helpless to move on offense in the first half. Over the first two quarters, the Cardinals managed just three first downs and trailed 13-7 at the break.

“I think Lumberton just got after us … but, you know, Newton and Kirbyville got after us too,” DuBois said. “I don’t know. We’ll watch film and make some adjustments and get ready for next week.”

The Raiders, now 2-0, opened up the scoring after eating away at the clock on a 16-play, 71-yard drive that ticked off nearly seven minutes. Brenner Boykin finished the drive with a 10 yard run. The extra-point kick gave the Raiders the 7-0 lead.

The Cardinals, who punted on their first drive, took the ensuing kickoff and ticked off seven yards from the 24 to get to their own 31. That’s when Cayce Draper busted the game’s biggest run of the night, a 69-yard jaunt for the touchdown. With the Alfredo Heraldes extra-point kick, the Cardinals had knotted the game at 7-7 with two minutes left in the first quarter.

After each team forced the other to turn the ball over on downs, the Raiders went back into grind mode, moving 60 yards in 10 plays, burning another five minutes off the clock before Caleb Thomas scored on a 17-yard run. After a failed kick attempt, the Raiders took their 13-7 lead into the locker room at the half.

In the first half, the Cardinals managed just 119 yards of total offense. On their opening drive of the second half, the Cards were no more successful, collecting just three yards before punting on the three-and-out drive.

It appeared Bridge City was on the path to a comeback after driving their next possession to the Lumberton 1 yard line. A fumble there, recovered by Jacob Bridgers, ended the threat.

The Cardinals defense stiffened, though, forcing the Raiders to punt away just four plays later. BC’s Zach Honeycutt took the punt at the 44 yard line and returned it back to the Lumberton 6.

Three plays later, Colt Poole cross the goal line and the Cards were back in the hunt, trailing 19-4 with nearly the entire fourth quarter left to play.

The Cardinals would have plenty more opportunities to score in the final 12 minutes but couldn’t overcome the Lumberton defense to get back into the end zone.

With just under three minutes left in the game, the Cardinals mounted a potent offensive drive but the second fumble of the game by BC ended the threat and the game.

“We had our opportunities. We fumble on the 1 yard line. That’s a momentum breaker,” Coach DuBois said. “Then we had some opportunities in the last eight minutes of the game and they made two big stops on fourth down.

“We’ve got another game coming up, we don’t have time to dwell on losses,” he said. “We’re going to Liberty next week and they are much improved over last year, then after that we have district. This one will sting a little bit but hopefully the kids will learn a lesson. We’ll look back in a couple of weeks and think, hey we learned something from that game.”

BC’s Draper led all rushers with 11 carries for 122 yards, while Poole added 65 yards on 14 carries, and Patrick Morris chipped in 5 carries for 47 yards.

The Raiders offense was led by quarterback Stephen Yarbro’s 103 yards passing, completing 8 of 17 on the night. Thomas was his top receiver with four catches for 65 yards. On the ground, Upshaw ran the ball 21 times for 96 yards. Thomas had 42 yards on nine carries.