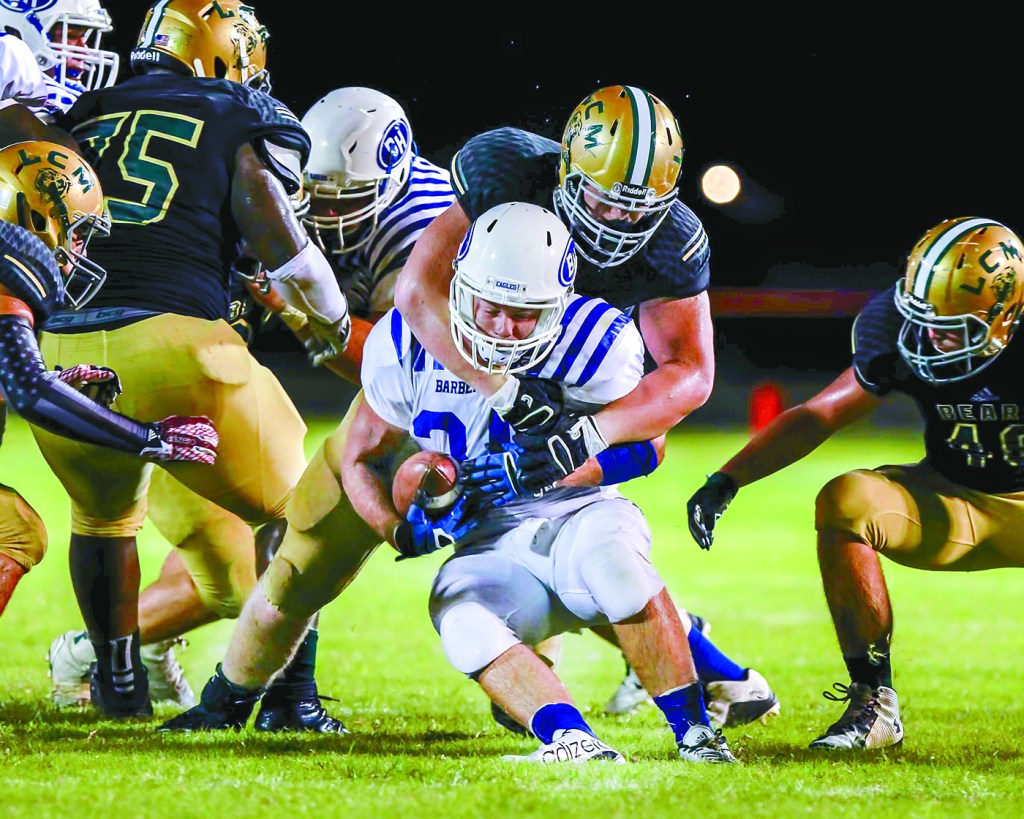 (By VAN WADE / The Orange Leader)—

LITTLE CYPRESS – Barbers Hill running back Jacob Rogers bolted 94 yards around the right side and down the sidelines in the fourth quarter as he helped the Eagles get past the Little Cypress-Mauriceville Battlin’ Bears 28-7 Friday night in non-district action at Battlin’ Bear Stadium.

The Bears (0-2) moved the ball pretty well at times, especially in the air, but five turnovers proved costly as the Eagles (1-1) escaped with the win.

The Bears actually outgained the Eagles 364-265 but the miscues killed them.

Bear quarterback Beau Bickham completed 9-of-16 passes for 192 yards and a touchdown and was picked off three times.

Ronald Guillory had three catches for 100 yards while Chris Winters hauled in five for 62 yards.

J’Lon Douglas led the Bears on the ground with 76 yards on 13 carries.

Rogers finished with 150 yards on 12 carries for the Eagles while quarterback Skylar Langelier and fullback Hunter Gobert teamed up for 90 yards on 17 carries. Barbers Hill turned the ball over on the first series of the third
quarter when Hunter Gobert coughed up the ball to Bear linebacker Bay Quebodeaux at the Eagle 48 with 11:55 in the third after the Bears led 7-6 at intermission.
Bickham completed a 25-yard dart to Guillory over the middle to the Eagle 21 but the drive ended up stalling. The Bears tried a fake punt from their own 49 with 6:10 in the third and it backfired as Bickham missed a pass to Guillory.
The Eagles grabbed a 13-7 lead by quickly going 49 yards in five plays as Langelier scampered around the left side for a 17-yard score. Marco Castillo nailed the extra-point to give the Eagles a 13-7 edge with 4:01 left in the third.
Bickham had a pass picked off by by Caden Hendricks at the Eagle 42, who brought it all the way back to the Bear 22. However, the Bear defense responded nicely and Castillo’s 40-yard field-goal attempt went wide left with 10:27 remaining.
The Bears moved from their own 23 all the way to the Eagle 25 with 6:47 remaining with the big play coming on a 37-yard pass to Guillory that got to the Eagle 39. However, Bickham got picked off by Hendricks again at the Eagle 2. Rogers scored on his gallop around right end on a third-and-6 from the 6 to make it 21-7 with 5:14 left. Eagle linebacker Brady Bonin sealed it when he brought back a Bickham interception 28 yards for a score with 4:56 left.
The Bears held a 7-6 lead at halftime, despite a couple turnovers, due to some big plays at the end of the half. Trailing 6-0 with 0:45 left in the half and sitting at their own 34, the Bears navigated 66 yards in four plays thanks to the arm of
Bickham.

Bickham found receiver Ronald Guillory open in the middle of the field for a 38-yard completion that got to the Eagle 28. Bickham then hit running back Chris Winters for an eight-yard strike to the 20. After two straight illegal procedure penalties, the Bears found themselves at the 30 with 0:08 left. Bickham dropped back and threw one up for grabs and Bear receiver Isaiah Reagins made a superb leaping catch in the end zone, outdueling two Barbers Hill defensive backs to haul in a
30-yard touchdown. Kicker Tyler Brown booted the extra-point to give the Bears the edge with just 0:02 left.
Bickham completed 4-of-5 passes for 106 yards in the first 24 minutes. On their first possession of the game, the Eagles marched 59 yards to paydirt in seven plays, all of it coming via the ground game. Tailback Morgan Lyons capped it with a nine-yard dart around the left side after getting a nice pitch from Skylar Langelier. The extra-point kick failed as the Eagles led 6-0 with 5:48 left in the first quarter.

The Eagles failed to cash in on a pair of Bear turnovers in the first half. Bickham fumbled the ball over to Eagle linebacker Cully Mangus at the Bear 47 with 7:31 in the half.
The Eagles reached the LC-M 26 and saw a touchdown called back after an illegal formation after Jack Pena hit Cameron Hendricks on what would have been a 26-yard score. The Bear defense held strong, stuffing Eagle fullback Hunter Gobert on fourth down.

Bickham and Winters teamed up for a 30-yard pass with 2:24 in the half but Winters fumbled after the catch at the Eagle 23.
The Bears outgained the Eagles 177-113 in the first half. Sam King led the Bear ground game with five totes for 37 yards.
Gobert had eight carries for 39 yards while Jacob Rogers had 33 yards on six carries and Langelier 27 yards on five totes.
The Bears will head to Baytown next week to face Goose Creek Memorial. 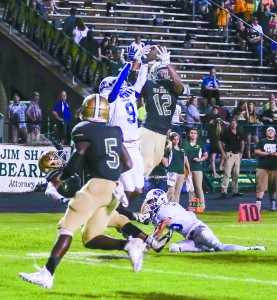 LC-M’s Isaiah Reagins (12) goes up high for the ball against Barbers Hill’s Joel O’Neal (9) during the first half Friday night. (Mark Pacha / The Orange Leader)