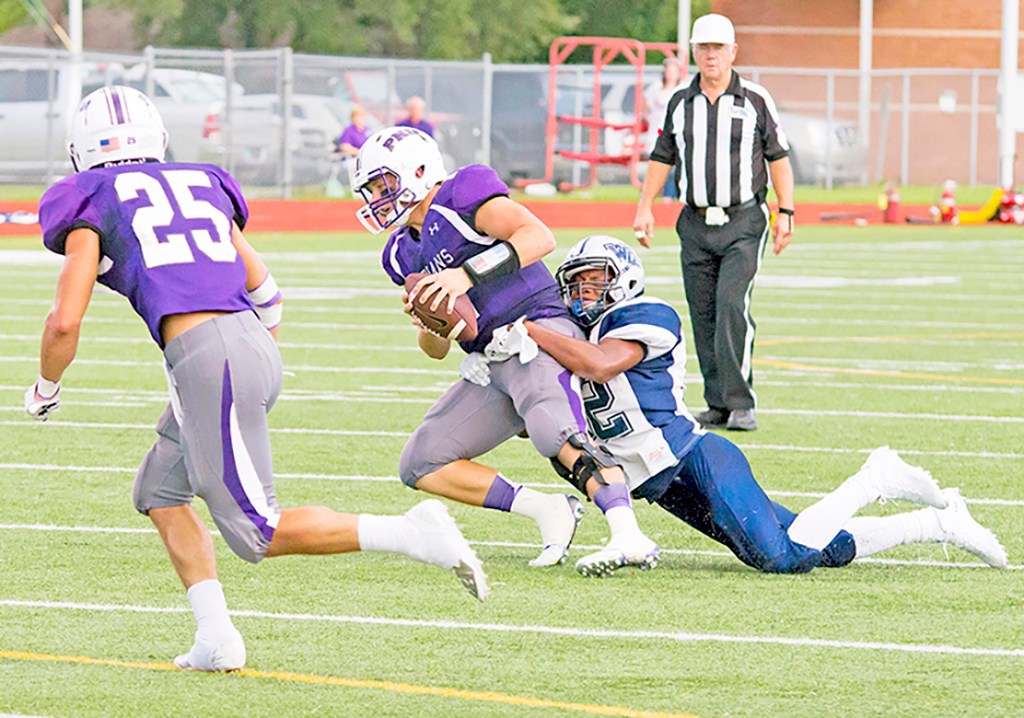 PORT NECHES — If West Orange-Stark’s defense has been in rebuild mode early in the season, the unit is quickly growing up.

“It’s grown a lot,” senior defensive tackle Jalen Powdrill said. “We practiced hard throughout the week, Monday, Tuesday, Wednesday, Thursday … and then Friday, we made it come together. We stayed together. Thanks to God, we did it.”

Two forced fumbles and an interception helped keep Port Neches-Groves in check on its home field, and Jack Dallas threw for 179 yards and a touchdown in pacing the 4A fifth-ranked Mustangs to a 28-14 victory before a nearly packed house inside The Reservation.

WO-S coach Cornel Thompson can rest easy for at least another week, knowing his Mustangs defense rose to the challenge and slowed down a 5A team that posted 52 points at Clear Lake six days earlier.

“Our guys got better tonight, and I’m proud of them,” Thompson said. “They gave a great effort. They came out in the second half and gave a heck of an effort. It paid off for us.”

PN-G quarterback Adam Morse completed 17 of 36 passes for 219 yards with an interception. He also threw for a touchdown and ran for another.

But the Mustangs held the Indians to four first downs in the second half before Justin Brown put the finishing touch on the win with a 14-yard touchdown run with 53 seconds remaining.

“I thought we had our opportunities, but we missed some,” Indians coach Brandon Faircloth said. “Too many turnovers, too many mistakes on offense and defense tonight. When you don’t score in the red zone and you have turnovers, you’re not going to win the game.”

The Mustangs took back control to start the second half after forcing Morse into three straight incomplete passes, including one on fourth-and-9 from the WO-S 29. From there, WO-S went 71 yards and broke a 14-14 halftime deadlock on a 20-yard scoring pass from Dallas to Thomas Wallace, who had five receptions for 65 yards.

With a 7-0 lead, Mustangs defensive back Demorris Thibodeaux picked off Morse on the Indians’ opening series.

“We got after them pretty good with the wide receivers and being able to front those guys up,” Thompson said. “They’ve got a lot of weapons, so we were going to try to take a couple of them out of the game. But they used some other ones, now.”

Almost 2 minutes earlier, Keion Hancock (eight receptions, 107 yards) ran 6 yards for the Mustangs’ first touchdown. He hauled in a 26-yarder from Dallas on the first play from scrimmage, starting an 82-yard, eight-play drive.

PN-G’s defense had its share of success in the first half, forcing WO-S to three three-and-out series.

Indians receiver Jack Giblin fought off a tackler from the 4 and barreled into the end zone on an 18-yard reception to even the score at 7 with 3:59 left in the first quarter. But the Mustangs’ Kentavious Miller answered with a 72-yard kickoff return from his own goal line, and WO-S capitalized five plays later on an 11-yard run by Malick Phillips.

A holding penalty and face mask call against WO-S on the next drive aided PN-G’s drive. Caisen Sullivan caught a 19-yard pass from Morse on fourth and 11 to the Mustangs’ 19 at the end of the opening quarter, but three plays later Kody Cropper fumbled at the end of an 8-yard run near the goal line.

Morse ran into the end zone standing up with 5:46 left before the break to tie the game. On the Indians’ next series, Keynel McZeal, who had four catches for 56 yards, coughed up the ball on a 22-yard reception and lost the ball at the Mustangs’ 31.

Giblin had five receptions for 75 yards and Cropper rushed 18 times for 73.

“We play West Orange-Stark to help us get better,” Faircloth said. “They’re a great team. This is a non-district game. We still have all our goals in front of us. It’s a long season.”