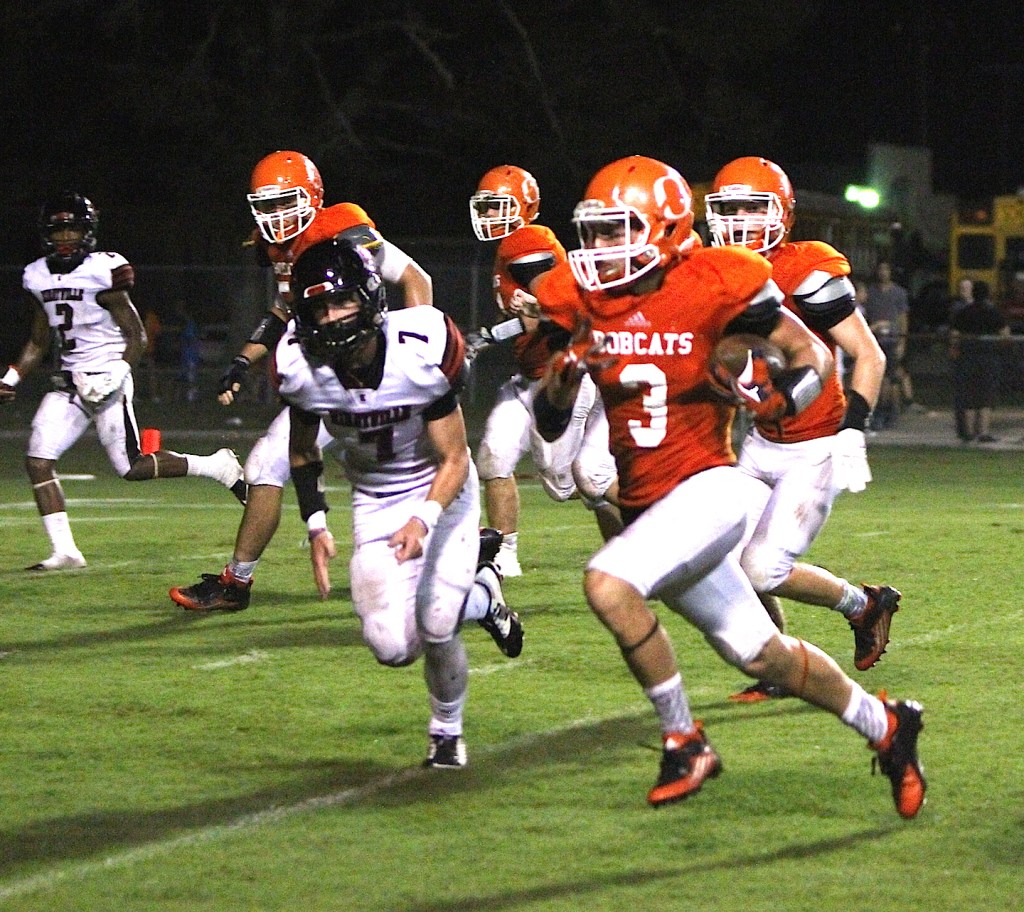 Wesley Frillou (3) finds room around the left side in the middle of the fourth quarter for a 13-yard touchdown for Orangefield. (Tommy Mann Jr. / The Orange Leader)

ORANGEFIELD — It wasn’t your typical Orangefield Bobcat football Friday night. Incomplete passes and a tough first half was the root cause of the 24-14 loss to the Kirbyville Wildcats.

The Bobcats went 1-for-9 for just three yards passing and failed to cross the goal line in first half.

“We are never excited about a loss, but we are definitely not down,” Bobcats head coach Josh Smalley said “We lost 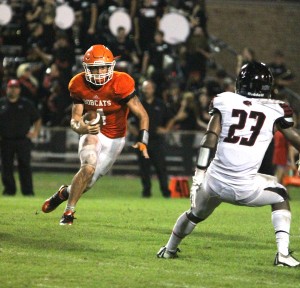 to a good team and we tip our hat to Kirbyville, but lets not forget we started off 0-2 last season.”

Kirbyville received the opening kick-off and Orangefield was quick to force a three-and-out.

The Bobcats downed the Wildcat punt at the five yard line and after a 48-yard drive they stalled and turned the ball over on downs.

A 26-yard run by Matthew Watkins highlighted the first quarter with both teams scoreless at the end of one. Watkins led all rushers on the night with 21 carries for 68 yards.

It was well into the second quarter before either team put points on the board. Wildcat quarterback Jackson Gore threw a deep corner route to the back of the end zone to Jaylan Dennis to put the Wildcats up, 7-0 with 3:15 left in the first half. Gore was 5-of-10 passing for 80 yards a touchdown and one interception on the night.

Kirbyville took advantage of several Orangefield miscues forcing a quick punt on the following series. The pressure from the Kirbyville defense forced a botched snap that went into the end zone for a safety and a two-score advantage heading into halftime.

“We had key mistakes that we will learn from,” Smalley said. “We keep doing what we are doing, but we got to finish and that’s where we fell short tonight.”

The Bobcats opened the second half with an eight -minute drive. They marched 73 yards on 12 plays and got help from Wildcat penalties. Watkins took a keeper up the middle for a three-yard touchdown run to pull the score within two points, 9-7.

It took the Wildcats just 1:20 to drive the field and answer with a quarterback keeper of their own. Gore dove in from one yard out following a 32-yard pass to Jaylen Dennis to increase the Wildcat lead to 16-7.

The Wildcat defense again forced the Bobcats to a three-and-out with just seconds left in the third quarter. Austin Reeves waited back to receive the punt for Kirbyville and went the distance down the left sideline for a 53-yard touchdown. The Wildcats led after three 24-7.

The Bobcats struggled to get momentum in the fourth quarter being forced to punt on their first series, but it was Wesley Frillou who breathed life back into the Bobcats when he intercepted Gore and returned it 21 yards setting the offense up in the red zone.

Frillou finished off the drive the very next play with a 13 yard rushing touchdown. Despite the swing in momentum and holding the Wildcats to just 189 yards of offense the Bobcats fell short and left the score hanging at 24-14, when the final whistle blew.

The Bobcats (1-1) will head to Kelly next Friday for their first road game of the 2015 season. After going 0-2 to start the 2014 season the Bobcats rebounded with a four game win streak. Coach Smalley and the Boys will look to bounce back after the tough loss at home.