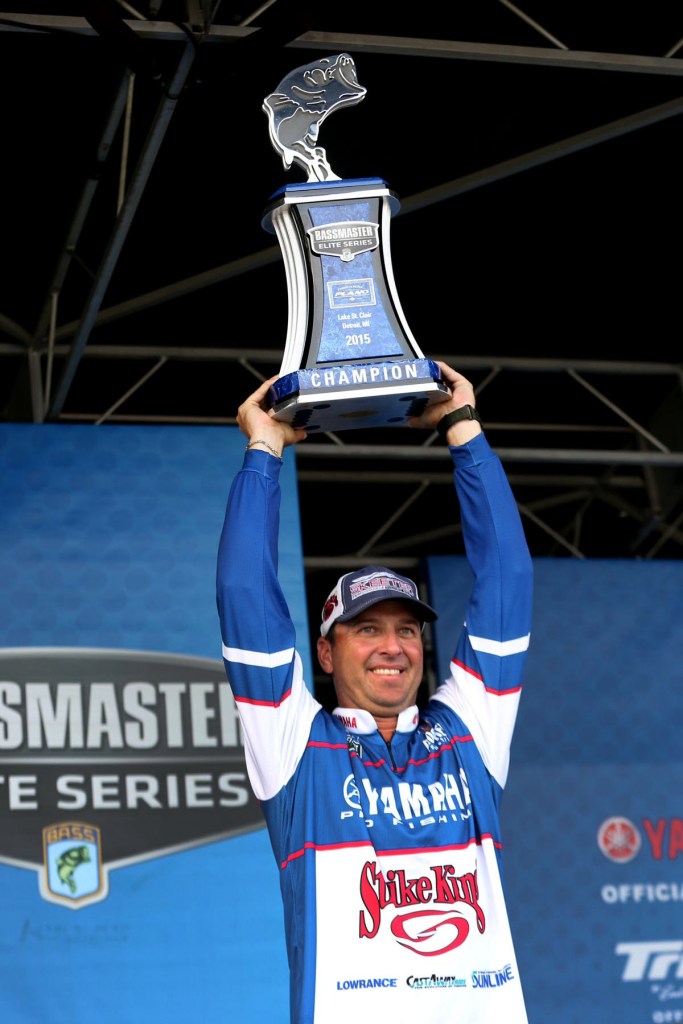 (Special to The Leader)—

DETROIT — A thrilling and unprecedented conclusion to the 2015 Plano Bassmaster Elite at Lake St. Clair brought a new level of anticipation to the professional bass-fishing world.

Todd Faircloth of Jasper, Texas, continued to improve his daily weights of bass and clinched the championship on Lake St. Clair.

Meanwhile, Aaron Martens caught 19 pounds, 6 ounces of bass Sunday, which was good enough for a sixth-place finish and the necessary points to lay early claim to the prestigious Toyota Bassmaster Anger of the Year title.

Faircloth spent the entire tournament building on the previous day’s weight by catching large smallmouth bass from Bell’s Hump, which is located on the Canadian side of Lake St. Clair.

“I wasn’t really fishing a specific spot, rather it was an expansive area that had all the right components to continue producing 20-pound bags each day,” the five-time Bassmaster Elite Series champion explained. “I felt a real freedom each day after putting about 19 pounds in the livewell. That freedom made it easy for me to explore more specific spots, and zero in on what I felt were the very best locations in my area.”

Faircloth brought 22-2 to the scales Sunday for a four-day total of 84-7, which bumped out Brandon Palaniuk, the leader on Friday and Saturday, by just over 6 pounds.

“I was fishing in 15 to 18 feet of water and I caught all my fish on a drop-shot this week,” Faircloth revealed.

The 13-time Bassmaster Classic contender said he caught the bulk of his fish on a Strike King Z Too soft jerkbait in the Arkansas Shiner pattern, which shares similarities with both gobies and perch.

His career statistics will show how uncharacteristic those results are, but this victory put him back in the hunt for a berth in the 2016 GEICO Bassmaster Classic presented by GoPro on Oklahoma’s Grand Lake. By sitting in 40th place in AOY points, he now gets to fish in Sturgeon Bay, Wisconsin, for the championship Sept. 17-20.

“To come from behind and win this tournament means a great deal to me, but to make such a big jump in the points and continue my season in Wisconsin makes it that much sweeter.”

Palaniuk of Rathdrum, Idaho, dropped almost 6 pounds from Saturday’s weight, weighing only 14-1 on Championship Sunday. His four-day total was 78-6.

“I really felt that the fish I had been catching all week were going to be ready to eat as soon as I got there,” Palaniuk said. “It didn’t take very long for me to realize the fish had moved, and I made the decision to return to St. Clair.”

Palaniuk spent the tournament fishing the St. Clair River near Lake Huron, and he explained that he learned how the wind, current and freighter traffic affected the bass in his location.

“Every time a ship would pass through the channel, it would literally suck the baitfish off the spot and create a feeding frenzy,” he said. “Today’s traffic was vey light and a factor that I think impacted my pattern.”

“My first day really set me back, I just didn’t capitalize on the bites,” said the 2012 Bassmaster Classic champion. “To come back to St. Clair and still have a shot at winning this thing was very exciting. Now I want to come back and see if I can keep my smallmouth momentum rolling.”

Rounding out the Top 5 were Chad Pipkens in fourth place with 77-2 and Greg Vinson in fifth with 76-4.

Martens’ came to win the Lake St. Clair tournament, however, with his points spread coming into this event, he knew claiming the AOY title early was a possibility.

“I made a few slight adjustments today by switching to a swimbait and I caught my best bag of the tournament,” said the newly crowned 2015 Toyota Bassmaster Angler of the Year. “I am pretty excited to win Angler of the Year for the third time in my career! I love Sturgeon Bay and I can’t wait to fish there in September.“

Sturgeon Bay, Wisconsin, will host the season-ending Toyota Bassmaster AOY Championship on Sept. 17-20, where the Top 50 pros will compete for shares of the $1 million purse as well as berths in the 2016 Classic.