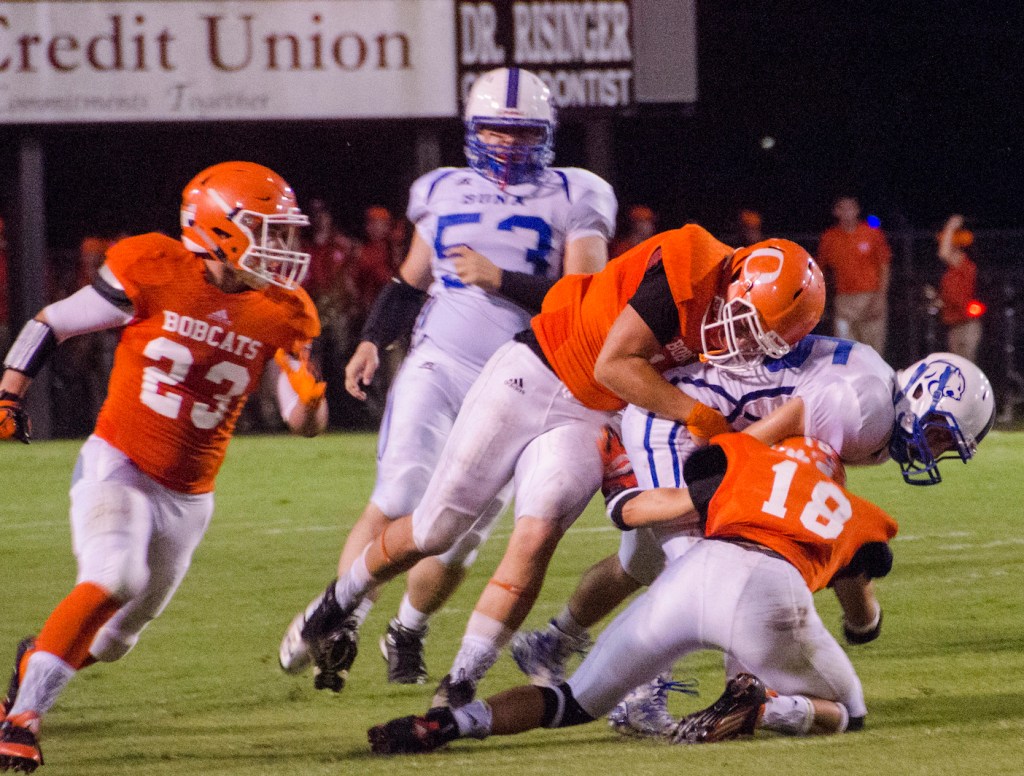 The Orangefield Bobcats defense kept the Buna Cougars offense out of the end zone enough to secure a 42-26 victory in Orangefield on Friday night. (Greg Mann / The Orange Leader)

ORANGEFIELD — A young and inexperienced offensive line proved effective Friday night as the Orangefield Bobcats rolled to a 42-26 win over the Buna Cougars. The Bobcats managed to churn for 351 yards rushing on 37 attempts in the victory.

“I am proud of our line and what they did tonight,” Bobcat head coach Josh Smalley said “We have things to work on, but for their first varsity game they really came together.”

Buna received the opening kick, but the Orangefield defense struck early and forced a three and out to set up nice field position for their offense. It was just three plays later that quarterback, Matthew Watkins, took a keeper up the middle for an impressive 62 yard touchdown run to give the Bobcats an early 7-0 advantage in the first quarter. Watkins led all rushers on the night with 106 yards and two touchdowns.

The Cougars offense began to pick up steam in the second quarter. Quarterback, Kobe Elder, led an eight play drive that he capped off with a 17 yard touchdown pass to the corner of the end-zone to Josh Kelly. The Bobcats however would hang tight to a one point lead with the Cougars failing to convert the two point conversion attempt.

The big plays continued for the Bobcats with Wesley Frillou bouncing off defenders for a 47 yard touchdown run that capped a 68 yard drive to lead 14-6. Watkins chipped in his second score of the night on the following Bobcat drive with 1:20 remaining in the half.

Buna, however, would not just run the clock out to end the half down two scores. They switched things up putting Josh Kelly in at quarterback. Kelly took the first snap and hit Remi Connel deep down the left side for a 42 yard touchdown pass to pull within a score, 21-14 at the half.

The Bobcats stuck with their fast paced style to open the second half. Triston McGee returned the opening kick, 70 yards before stepping out of bounds. Triston finished off the opening drive two plays later scoring untouched from the two yard line to give the Bobcats a commanding lead, 28-14.

Buna turned to Justin Kennedy in the second half. After just one carry for four yards in the first half of play, Kennedy turned in nine second half carries for 78 yards. Including a five yard and two yard touchdown runs. Kennedys’ effort would fall short and be over shadowed by the Bobcats Christopher McGee who kept the Bobcats offense moving in the second half with 92 total yards on the night. Christopher chipped in the final Bobcat score that essentially sealed the game on a sweep play from 11 yards out.

The Bobcats turned in a total team effort in route to the opening week victory. They held the Buna offense to just 226 yards. Orangefield will play host to Kirbyville next Friday who is coming off a loss to the rejuvenated Bridge City Cardinals. Kirbyville will likely be without their star running back Ty Dennis as well.