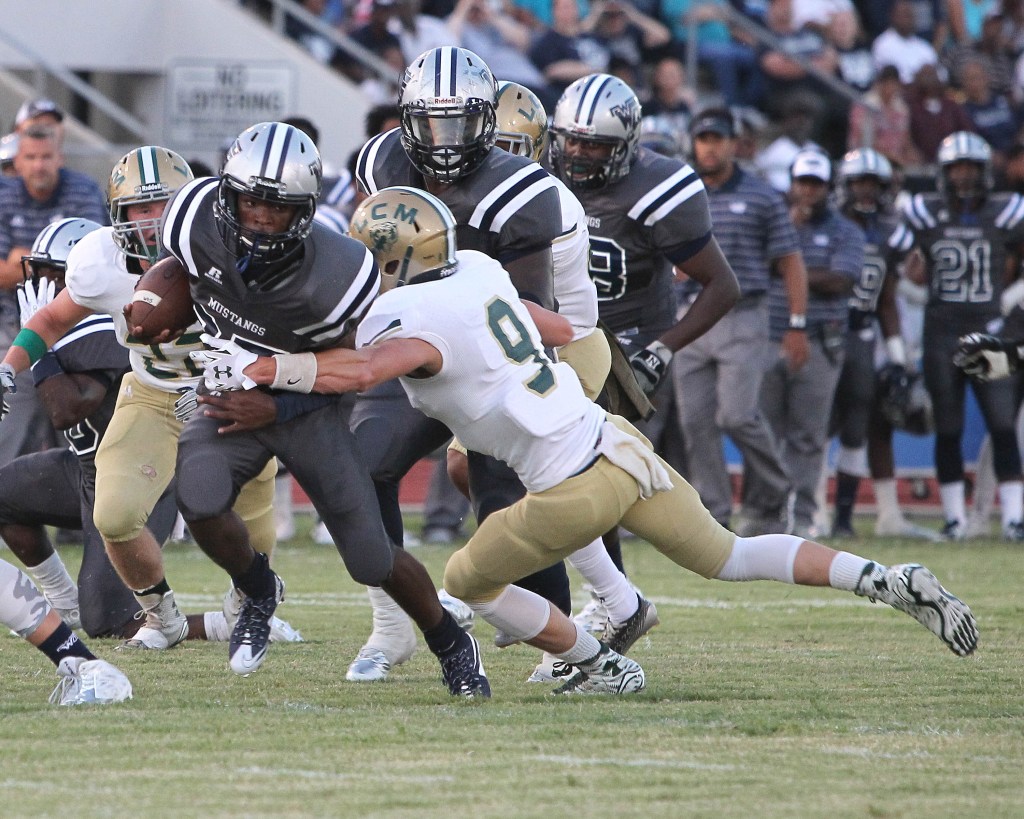 WO-S' Keion Hancock (27) looks to get past LC-M's Drake Dietze (9) during the first half Friday night. (Leader Photo by Mark Pachuca)

WEST ORANGE – After misfiring on a few golden opportunities in the first half, the West Orange-Stark Mustangs were able to hold off the Little Cypress-Mauriceville Battlin’ Bears 26-13 in a very competitive game for the Orange Bowl Friday night at Hooks Stadium.

The Mustangs (1-0), coming off a trip to the Class 4A Division II State Championship Game last year, sported a lot of new faces in their lineups Friday night but the youngsters rose up and made the plays when they had too to turn back the proud Bears (0-1), who fought hard for 48 minutes. LC-M is looking to make the playoffs for the third year in a row.

WO-S outgained the Bears 388-186 but were thwarted twice inside the LC-M 5 in the first half.

Mustang quarterback Jack Dallas completed 18-of-24 passes for 220 yards and a pair of touchdowns.

WO-S receiver Keion Hancock ran for one score and caught one for another and finished with six catches for 90 yards. Running back Malech Edwards rushed for 108 yards on 15 carries and receiver KJ Miller caught three passes for 68 yards and a score.

“It definitely looked like a first football game, especially for a young football team like ours,” said WO-S coach Cornel Thompson. “We made some mistakes, especially in that first half but the kids got better and got into the flow of the game. Give the LC-M kids credit, they hung in there and made some good stops when they had too. I was happy with our offensive line tonight and hopefully those kids will improve from week to week and Jack (Dallas) was solid at quarterback and we showed tonight that we have a pretty good group of receivers.”

For the Bears, running back Chris Winters darted for 90 yards on eight carries, including a breakaway 60-yard gallop. Quarterback Beau Bickum passed for a score and ran for another. Sam King had two catches for 52 yards and a score.
The Mustangs snared a 26-13 edge with 10:23 remaining when Dallas hit Miller in the left flat. Miller made a juggling catch and turned it into a 17-yard touchdown pass. The point-after failed with WO-S leading 26-13. The big play on the drive came when Dallas connected with Hancock on a deep pass over the middle that went 41 yards down to the Bear 28 on a third-and-11 play.
Mustang defensive back Malick Phillips helped seal it when he picked off a Bickum pass at the WO-S 48 with 2:36 remaining.
WO-S took their first possession of the third quarter and zipped 61 yards in nine plays to go up 20-7.
The Mustangs kept it on the ground for eight of the plays with tailback Edwards carrying the leather six times for 55 yards including a 26-yard gain and a 14-yard scamper. WO-S capped it when Dallas hit receiver Miller on a 1-yard slant for the score. The extra-point attempt was botched as WO-S led 20-7 with 5:02 in the third.
The Bears retaliated in fine fashion.
Winters was able to break away from the Mustang defense down the right sideline for a 60-yard scamper all the way down to the WO-S four. LC-M was able to get it into the end zone on fourth down when Bickum was able to sneak it in from the 1. WO-S’ Malick Phillips blocked the extra-point attempt but the Bears were able to trim it to 20-13 with 1:09 in the third.

“Defensively, I thought we held pretty good other than that long run by the Winters kid and the pass right before the half,” said Thompson. “We saw some plenty of positives and we have the potential to be a good ballclub before it’s all said and done.”
The Mustangs held a 14-7 lead at the half. The Battlin’ Bear defense rose up twice in stopping the Mustangs on first-and-goals in the first 24 minutes, stopping WO-S on two fourth down attempts and LC-M got a big play from its offense near the end of the half to get on the board after trailing 14-0.
The Mustangs navigated 62 yards in eight plays to hit paydirt on the first series of the game.
Dallas was 5-for-5 on the march, passing for 44 yards to five different receivers. Keion Hancock caped it off when he darted around left tackle and scooted to the end zone from eight yards out. Ryan Baham-Heisser booted the extra-point as WO-S snared a 7-0 lead with 9:25 left in the first quarter.
On their next drive, the Mustangs got all the way to the LC-M 9 and the Battlin’ Bear defense held the Mustangs out of the end zone with nice secondary play on three straight passes. Dallas hooked up with speedy wideout Miller that went for 50 yards that got down to the Bear 31 on that possession.
The Mustangs failed to capitalize again on their next series after getting good field position at the Bear 35. WO-S was able to net a pair of first downs and set up first-and-goal from the 9. Once again the LC-M defense rose up as they Mustang back Jeremiah Shaw for no gain on fourth down from the 3.
The WO-S defense, however, stifled the Bear offense deep in LC-M territory again and the Mustangs took over at the Bear 26 after a 18-yard punt. On the next play, Dallas found Hancock on a short route to the left and Hancock did the rest, scoring his second touchdown of the night by going 26 yards to make it 14-0 with 11 minutes left in the first half.
The Mustangs tried a fake punt that they would later pay for when the Bears halted Justin Brown for no gain on fourth-and-6 from the WO-S 49 with 1:41 left in the half.
Three plays later the Bears found the end zone when Bickham scrambled to the right and with a Mustang wrapped almost all around him, he was able to get off a pass to a streaking Sam King running down the left side of the field. Bickum hit King in stride and the running back bolted to the end zone for a 49-yard touchdown pass with just 0:23 left in the half. Tyler Brown booted the Bear point-after to make it 14-7.
The Mustangs had 196 yards in the first half while the Bears had 102. Dallas was 12-of-15 for 143 yards. Hancock had four catches for 46 yards.
Chris Winters had seven carries for 30 yards for the LC-M ground attack.

The Mustangs will head to The Reservation next week to take on the Port Neches-Groves Indians while the Bears return home to play host to the Barbers Hill Eagles.